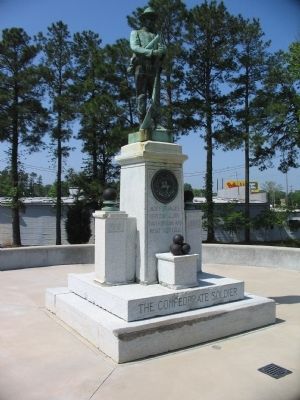 Not for wages
Not for gory,
'twas for home and
Right they fell.
Reverse:
To Perpetuate the
valor of the men
from Lenoir County
who wore the grey.
Erected May 10th 1924
by
A.M. Waddell Chapter
U.D.C.

Location. 35° 14.383′ N, 77° 34.88′ W. Marker is near Kinston, North Carolina, in Lenoir County. Memorial can be reached from Harriette Drive south of Meadowbrook Drive, on the right when traveling south. Located at the Wil King Memorial Site at the First Battle of Kinston Civil War Battlefield Park. Touch for map. Marker is in this post office area: Kinston NC 28504, United States of America. Touch for directions. 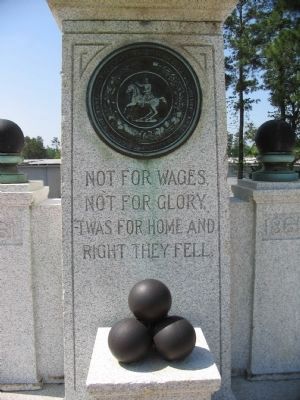 More about this memorial. This monument was relocated in June 2020 to the current location.

Additional comments.
1. Description of Monument.
A standing Confederate soldier wearing hat, waist-length jacket, trousers, and boots; he carries bayonet holder, gunpowder pack, blanket, and canteen strapped to his body. He grips barrel-end of rifle in both hands, rests butt of gun on ground before proper right foot. Base consists of a central tall four-sided shaft flanked by two shorter shafts, all three supported on a low square plinth. In front of central shaft is a small pedestal which holds four cannonballs. Central shaft is inscribed and carries an inset medallion of bronze which portrays a horse and rider. 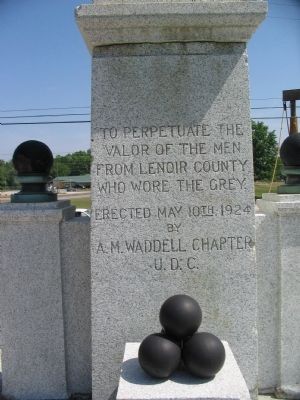 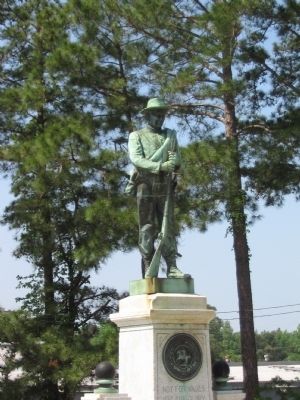 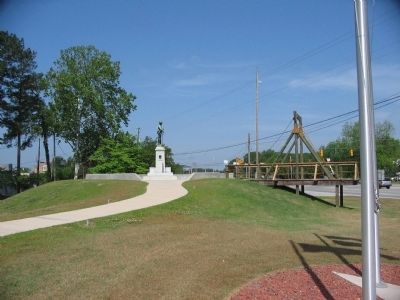 Editor’s want-list for this marker. Photos of the monument at its location in the First Battle of Kinston Civil War Battlefield Park as of June 2020. • Can you help?
Share This Page.