This Museum is the vision of a group of Navy and civilian personnel who in 1974 set out to formally organize a museum to preserve and celebrate the history of the Naval Air Test Center at Patuxent River.

They received support from the community, the county, and the State; and in 1978 the Naval Air Test & Evaluation Museum opened in a building on grounds provided by the Naval Air Station. The building was originally built as the USO Canteen toward the end of World War II.

In 1992, the Secretary of the Navy designated the Museum as one of the ten official Navy museums.

In 1997, the Museum’s name was changed to the Patuxent River Naval Air Museum to reflect its new mission of preserving and interpreting the research, development, testing & evaluation of naval aircraft and their related systems.

The Museum is the repository for all of the artifacts, photographs & films, documents and other heritage memorabilia from Patuxent River, and other stations, such as Warminster, Pennsylvania, and Trenton, New Jersey, now all consolidated at Patuxent River under the Naval Air Systems Command and the Naval Air Warfare 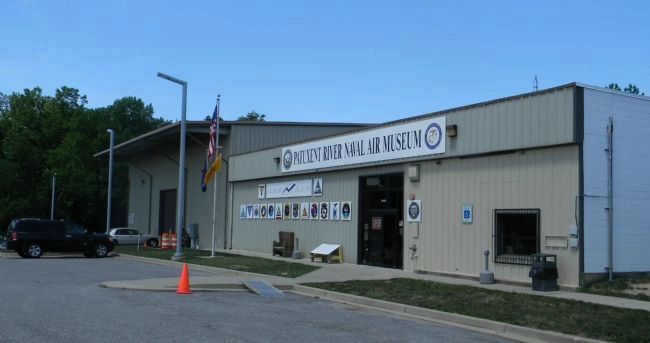 Photographed By Richard E. Miller, June 16, 2012
2. Patuxent River Naval Air Museum
The marker is visible on the sidewalk to left of the main entrance.

The aircraft on the Museum grounds are representative of the aircraft developed for the Navy and actually tested at Patuxent River.

The Museum is dedicated to all of those who have expended their talents in a myriad of different ways to the cause of advancing naval aviation technology.

Topics and series. This historical marker is listed in these topic lists: Air & Space • Education • Industry & Commerce • Waterways & Vessels. In addition, it is included in the AIAA Historic Aerospace Sites series list. A significant historical year for this entry is 1974.

Location. Marker has been reported missing. It was located near 38° 16.594′ N, 76° 27.784′ W. Marker was in Lexington Park, Maryland, in St. Mary's County. Marker could be reached from Three Notch Road (Maryland Route 235) just north of Buse Road, on the right when traveling north. The marker is off the highway at the main entrance to the Museum which occupies the northwest corner of the Naval Air Station. Touch for map. Marker was at or near this postal address: 22156 Three Notch Road, Lexington Park MD 20653, United States of America. Touch for directions.

Other nearby markers. At least 8 other markers are within walking distance of this location. Against the Odds (a few steps from this marker); Medals of Honor (within 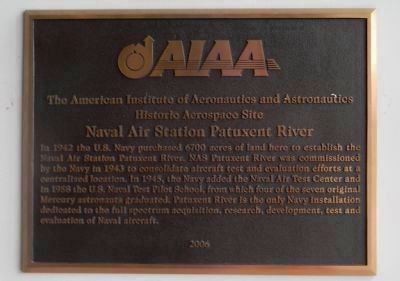