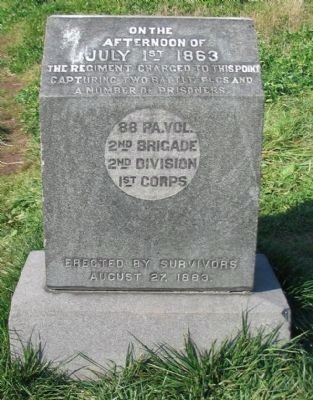 Erected 1883 by Survivors of the 88th Pennsylvania Volunteers.

Topics. This memorial is listed in this topic list: War, US Civil. A significant historical month for this entry is July 1863.

Location. 39° 50.615′ N, 77° 14.575′ W. Marker is in Cumberland Township, Pennsylvania, in Adams County. Memorial is on Doubleday Avenue, on the right when traveling south. Located on the Oak Ridge section in Gettysburg National Military Park. Touch for map. Marker is in this post office area: Gettysburg PA 17325, United States of America. Touch for directions. 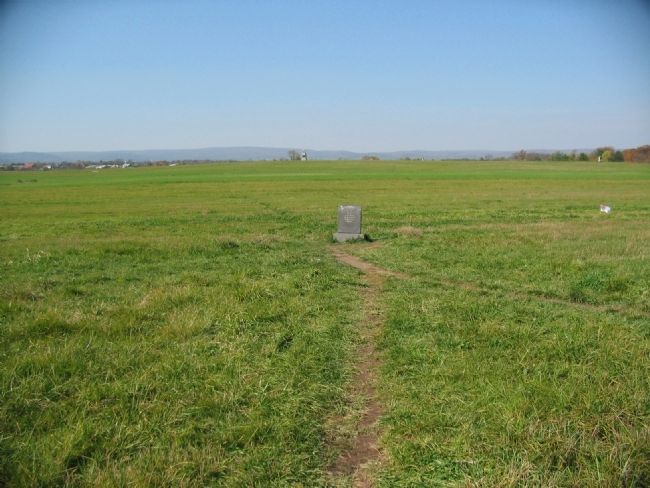 Photographed By Craig Swain, November 1, 2008
2. Forney Field
At the time of the battle, this field was part of the John Forney Farm. The small Confederate flag beside the marker indicates one of the many "Iversons Pits" in the field. Dead Confederates from the fighting were buried in long burial trenches after the battle. The remains were relocated to cemeteries in the south in the 1870s.

Related markers. Click here for a list of markers that are related to this marker. The 88th Pennsylvania at Gettysburg. 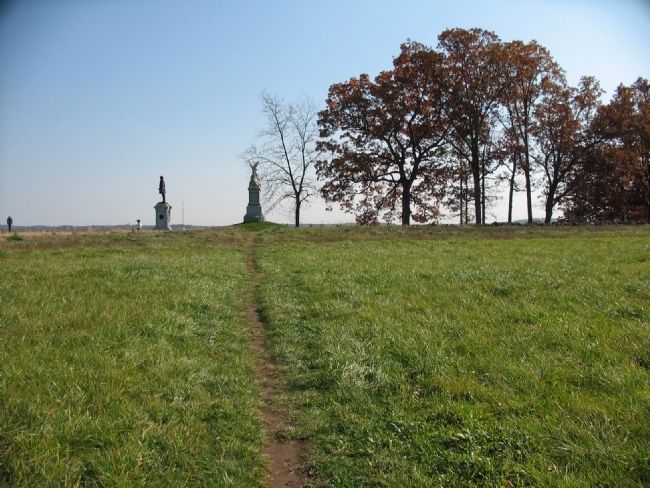 Photographed By Craig Swain, November 1, 2008
3. Advance of the 88th Pennsylvania
Looking east from the marker location toward the main regimental monument. The 88th Pennsylvania was one of the regiments that wheeled forward into Forney's fields to repulse Iverson's Brigade. 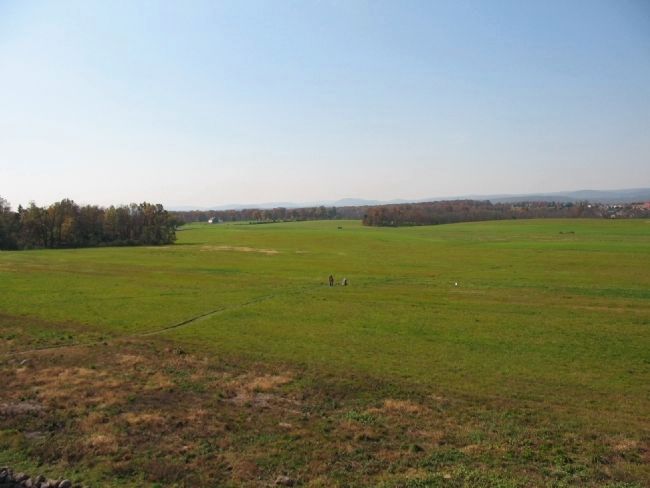 Photographed By Craig Swain, November 1, 2008
4. Forney Field as Seen from the Observation Tower
Looking from the Oak Ridge observation tower, the marker is easily seen in the field. Recently the trees here were cleared to restore the wartime appearance of this sector of the field. Clear in this view is the dip in the ground which placed the advancing Confederates at a disadvantage. Federal fires from the crest of the ridge (to the left of this view) caught Iverson's Brigade on the flanks, exposed down the natural draws of the ground.
Credits. This page was last revised on November 2, 2021. It was originally submitted on January 18, 2009, by Craig Swain of Leesburg, Virginia. This page has been viewed 1,228 times since then and 13 times this year. Photos:   1, 2, 3, 4. submitted on January 18, 2009, by Craig Swain of Leesburg, Virginia.
Share this page.