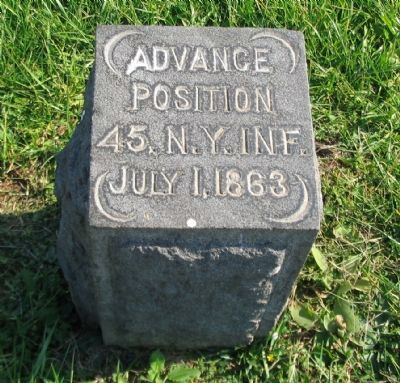 Photographed By Craig Swain, November 1, 2008
1. 45th New York Infantry Marker
Crescents, the symbol of the Federal Eleventh Corps, are incorporated in the corners of the marker.
Inscription.
45th New York Infantry. .
Advance Position 45. N.Y. Inf. July 1, 1863. . This historical marker was erected in 1888 by State of New York. It is in Cumberland Township in Adams County Pennsylvania

Topics. This memorial is listed in this topic list: War, US Civil. A significant historical month for this entry is July 1862.

Location. 39° 50.667′ N, 77° 14.401′ W. Marker is in Cumberland Township, Pennsylvania, in Adams County. Memorial is on McLean Farm Lane, 0.1 miles north of Mummasburg Road, on the right when traveling north. Located south of the McLean Farm on the east side of Oak Ridge, in Gettysburg National Military Park. Touch for map. Marker is in this post office area: Gettysburg PA 17325, United States of America. Touch for directions. 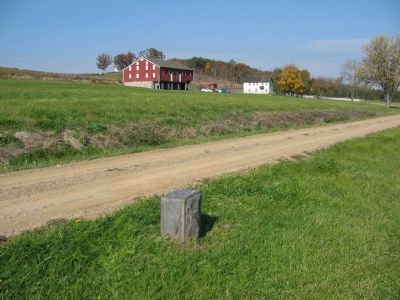 Photographed By Craig Swain, November 1, 2008
2. Position Marker and the McLean Farm
The farm is currently used by the National Park Service as service buildings and personnel residences. The recent tree clearing on Oak Hill has nearly restored this location it's wartime appearance. However, the railroad was a post-war addition to the landscape.

Click or scan to see
this page online
Click here for a list of markers that are related to this marker. The 45th New York at Gettysburg. 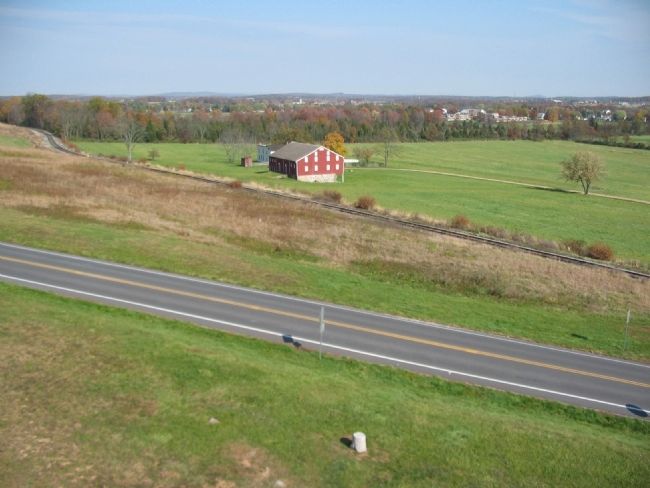 Photographed By Craig Swain, November 1, 2008
3. McLean Farm from the Observation Tower
Looking at the farm from the Oak Ridge Observation tower. The Mummasburg Road runs near the base of the tower (foreground here), with flank markers for the 90th Pennsylvania representing the right of the First Corps line. The 45th New York was the left most unit in the Eleventh Corps line, as it advanced in the early afternoon of July 1. Skirmishers of the 45th reached the base of Oak Ridge along the Mummasburg Road, with the center of the line just southeast of the McLean Farm.
Credits. This page was last revised on November 2, 2021. It was originally submitted on January 19, 2009, by Craig Swain of Leesburg, Virginia. This page has been viewed 1,185 times since then and 20 times this year. Photos:   1, 2, 3. submitted on January 19, 2009, by Craig Swain of Leesburg, Virginia.
Share this page.