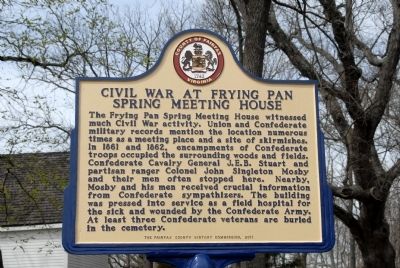 The Frying Pan Spring Meeting House witnessed much Civil War activity. Union and Confederate military records mention the location numerous times as a meeting place and a site of skirmishes. In 1861 and 1862, encampments of Confederate troops occupied the surrounding woods and fields. Confederate Cavalry General J.E.B. Stuart and partisan ranger Colonel John Singleton Mosby and their men often stopped here. Nearby, Mosby and his men received crucial information from Confederate sympathizers. The building was pressed into service as a field hospital for the sick and wounded by the Confederate Army. At least three Confederate veterans are buried in the cemetery.

Topics and series. This historical marker is listed in this topic list: War, US Civil. In addition, it is included in the Virginia, Fairfax County History Commission series list. A significant historical year for this entry is 1861. 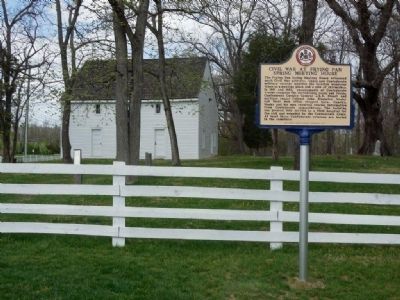 Click or scan to see
this page online
of Centreville Road (County Route 657) and Copper Ridge Drive, on the right when traveling north on Centreville Road. Marker is located in Floris at the Frying Pan Spring Meeting House at Frying Pan Farm Park. Touch for map. Marker is in this post office area: Herndon VA 20171, United States of America. Touch for directions.

More about this marker. The marker is dated 2011 - that is the year the marker was approved and ordered by the Fairfax County History Commission. 2013 was the year of installation on site.