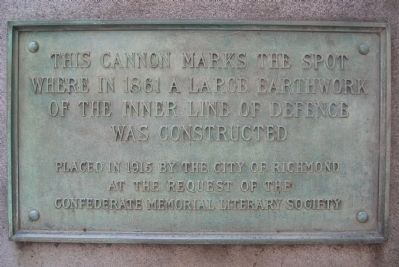 Topics. This historical marker is listed in this topic list: War, US Civil. A significant historical year for this entry is 1861.

Location. Marker has been permanently removed. It was located near 37° 33.467′ N, 77° 28′ W. Marker was in Richmond, Virginia. Marker was on Monument Avenue, 0.1 miles west of Strawberry Street, in the median. Touch for map. Marker was at or near this postal address: 2300 block, Richmond VA 23221, United States of America. Touch for directions.

Other nearby markers. At least 8 other markers are within walking distance of this location. Jefferson Davis (about 400 feet away, measured in a direct line); Broad Street Station (approx. 0.2 miles away); 509 North Mulberry Street (approx. ¼ mile away); Memorial Bell Tower (approx. ¼ mile away); Virginia Historical Society 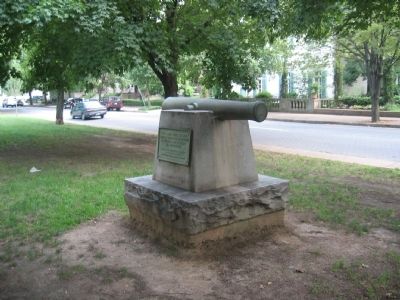 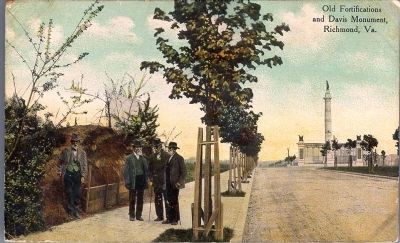 Photographed By Southern Bargain House, circa 1910
3. Old Fortifications and Davis Monument, Richmond, Va.
On Monument Ave., in the western portion of the City. To the left is shown a remnant of the original earth works which formed a part of the inner defenses of the City during the Civil War. The group of 'Old' Confederate Veterans standing near lend an added interest to this fast disappearing relic of the trying days of '61-'65. In the distance appears the superb 'Davis Monument.' VCU Libraries Digital Collections - Rarely Seen Richmond
Credits. This page was last revised on July 30, 2020. It was originally submitted on January 21, 2009, by Bernard Fisher of Richmond, Virginia. This page has been viewed 1,374 times since then and 11 times this year. Photos:   1, 2. submitted on January 21, 2009, by Bernard Fisher of Richmond, Virginia.   3. submitted on July 4, 2009, by Bernard Fisher of Richmond, Virginia. • Craig Swain was the editor who published this page.
Share this page.