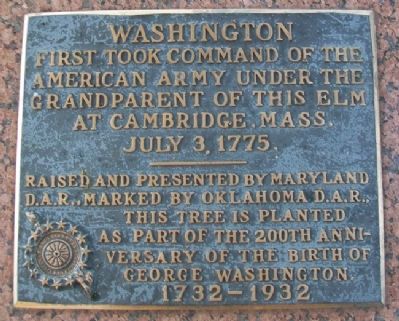 Washington first took command of the American Army under the Grandparent of this Elm at Cambridge, Mass.
July 3, 1775.
—————
Raised and presented by Maryland D.A.R., marked by Oklahoma D.A.R.,
This tree is planted as part of the 200th Anniversary of the Birth of George Washington.
1732 - 1932

Erected 1932 by Oklahoma Daughters of the American Revolution.

Topics and series. This historical marker is listed in these topic lists: Colonial Era • Environment • Patriots & Patriotism • War, US Revolutionary. In addition, it is included in the Daughters of the American Revolution (DAR), the Former U.S. Presidents: #01 George Washington, and the Historic Trees series lists. A significant historical month for this entry is July 1913. 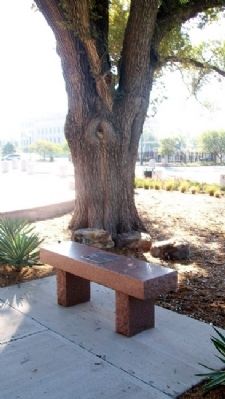 Click or scan to see
this page online
and tree are on the south grounds of the Oklahoma State Capitol. Touch for map. Marker is at or near this postal address: 2300 North Lincoln Boulevard, Oklahoma City OK 73105, United States of America. Touch for directions.