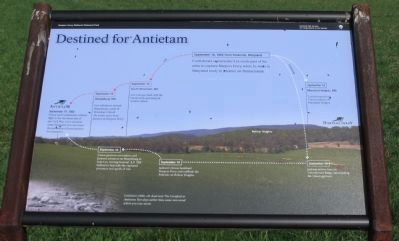 Photographed By Craig Swain, April 5, 2008
1. Destined for Antietam Marker
The movements of Lee's part of the Confederate Army is detailed on the upper half of the marker. Jackson's on the lower half.
Inscription.
Destined for Antietam. Harpers Ferry National Historical Park. Text of the marker is arranged to illustrate the movements of the Confederate Army during the Antietam Campaign of 1862:, September 10, 1862 from Frederick, Maryland , Confederate commander Lee sends part of his army to capture Harpers Ferry, while he waits in Maryland to advance on Pennsylvania., Jackson , September 13 , Maryland Heights, MD , Confederates force Union soldiers off Maryland Heights., September 13 , Jackson arrives here on Schoolhouse Ridge, surrounding the Union garrison., September 14 , Jackson's forces bombard Harpers Ferry and outflank the Federals on Bolivar Heights., September 15 , Union garrison surrenders, and Jackson advances on Sharpsburg to help Lee, leaving General A.P. Hill behind to deal with the captured prisoners and spoils of war., Lee , September 14 , South Mountain, MD , Lee's troops clash with the Union army and delay its counter attack., September 15 , Sharpsburg, MD , Lee withdraws toward Sharpsburg, north of Showman's Knoll. He awaits news from Jackson at Harpers Ferry., Antietam , September 17, 1862 , Union and Confederate soldiers fight in the bloodiest day of the Civil War. Lee's invasion ends, President Lincoln issues the preliminary Emancipation Proclamation. . This historical marker was erected by National Park Service, U.S. Department of the Interior. It is Near Bolivar in Jefferson County West Virginia

Text of the marker is arranged to illustrate the movements of the Confederate Army during the Antietam Campaign of 1862:

September 10, 1862 from Frederick, Maryland
Confederate commander Lee sends part of his army to capture Harpers Ferry, while he waits in Maryland to advance on Pennsylvania.

September 15
Union garrison surrenders, and Jackson advances on Sharpsburg to help Lee, leaving General A.P. Hill behind to deal with the captured prisoners and spoils of war. 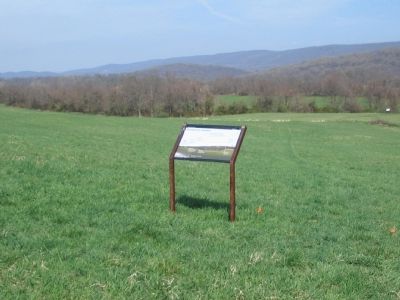 Topics and series. This historical marker is listed in this topic list: War, US Civil. In addition, it is included in the Former U.S. Presidents: #16 Abraham Lincoln series list. A significant historical month for this entry is September 1705.

Location. 39° 19.25′ N, 77° 46.75′ W. Marker is near Bolivar, West Virginia, in Jefferson County. Marker can be reached from Bakerton Road (County Route 27), on the right when traveling south. Located in the north section of the School House Ridge unit of the Harpers Ferry National Historic Park. The marker is along a walking trail just north of the William L. Wilson Freeway (US 340). The trail is best reached from the parking area on Bakerton Road (CR 27). Touch for map. Marker is in this post office area: Harpers Ferry WV 25425, United States of America. Touch for directions.

Other nearby markers. At least 8 other markers are within walking distance of this marker. Fake Attack - September 14th (about 400 feet away, measured in a direct line); Assessing the Obstacle (about 500 feet away); Confederates Converge (about 600 feet away); Flag Talk (approx. 0.3 miles away); Battle of Harpers Ferry (approx.

Photographed By Craig Swain, April 5, 2008
3. Schoolhouse Ridge
The wayside stands next to a 3-in Model 1861 Ordnance Rifle.
0.3 miles away); No Man's Land (approx. 0.4 miles away); Allstadt House (approx. half a mile away); A Dangerous Position (approx. 0.6 miles away). Touch for a list and map of all markers in Bolivar.

More about this marker. The background of this marker is a panoramic photograph of the terrain seen from Schoolhouse Ridge. Key points indicated are the respective locations of Sharpsburg, South Mountain, Bolivar Heights, Maryland Heights, and Harpers Ferry. In the lower left corner is an inset photograph of Louisiana soldiers lie dead near the Cornfield at Antietam. Two days earlier these same men stood where you now stand. 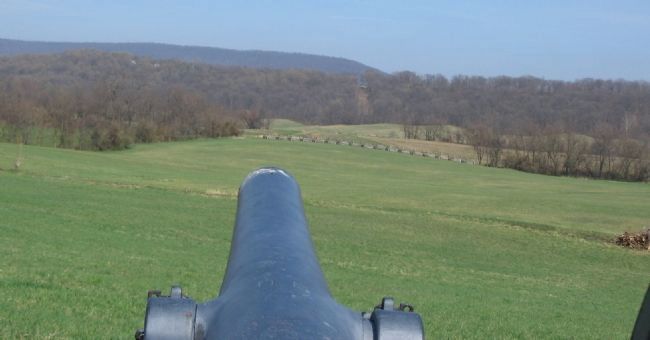 Photographed By Craig Swain, April 5, 2008
4. Bolivar Heights from Schoolhouse Ridge
Looking down the barrel of the 3-inch Rifle at Bolivar heights. The cut through the woods on Bolivar Heights, to the right of the gun barrel, was created to provide viewing for a similar 3-in Rifle placed on that ridge line. The perspective between these two guns is a fine study of artillery placement during the Civil War. Maryland Heights stands behind Bolivar Heights in the distance.
Credits. This page was last revised on September 12, 2020. It was originally submitted on May 22, 2008. This page has been viewed 1,312 times since then and 22 times this year. Last updated on September 6, 2020, by Bradley Owen of Morgantown, West Virginia. Photos:   1, 2, 3, 4. submitted on May 22, 2008, by Craig Swain of Leesburg, Virginia. • J. Makali Bruton was the editor who published this page.
Share this page.