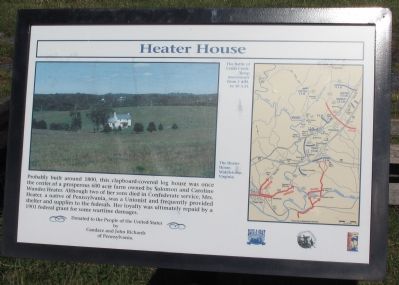 Photographed By Craig Swain, September 29, 2007
1. Heater House Marker
Inscription.
Heater House. . Probably built around 1800, this clapboard-covered log house was once the center of a prosperous 600 acre farm owned by Solomon and Caroline Wunder Heater. Although two of her sons died in Confederate service, Mrs. Heater, a native of Pennsylvania, was a Unionist and frequently provided shelter and supplies to the federals. Her loyalty was ultimately repaid by a 1901 federal grant for some wartime damages.,
Donated to the People of the United States , by , Candice and John Richards , of Pennsylvania. . This historical marker was erected by Blue and Gray Education Society and Cedar Creek Battlefield Foundation. It is Near Middletown in Frederick County Virginia

Probably built around 1800, this clapboard-covered log house was once the center of a prosperous 600 acre farm owned by Solomon and Caroline Wunder Heater. Although two of her sons died in Confederate service, Mrs. Heater, a native of Pennsylvania, was a Unionist and frequently provided shelter and supplies to the federals. Her loyalty was ultimately repaid by a 1901 federal grant for some wartime damages.

Topics. This historical marker is listed in this topic list: War, US Civil. A significant historical year for this entry is 1800.

Location. 39° 1.13′ N, 78° 17.634′ W. Marker is near Middletown, Virginia, in Frederick County. Marker is on Valley Pike (U.S. 11), on the right when traveling south. Located at a pull-off overlooking the Heater House. Touch for map. Marker is in this post office area: Middletown VA 22645, United States of America. Touch for directions. 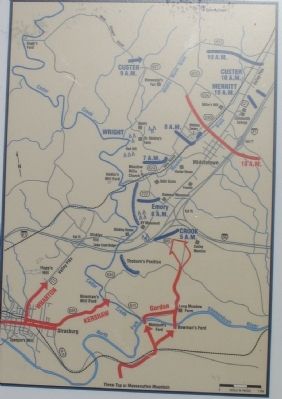 More about this marker. On the left the marker displays "The Heater House, Middletown, Virginia." And on the right is a map of "The Battle of Cedar Creek: Troop movements from 5 A.M. to 10 A.M."

Regarding Heater House. The Cedar Creek battlefield is interpreted by several markers. See the Battle of Cedar Creek Virtual Tour by Markers link below.

2. Battle of Cedar Creek Preservation Efforts. Civil War Preservation Trust site detailing preservation efforts at the battlefield. The site includes a wealth of background information on the battle and an animated map. (Submitted on October 18, 2008, by Craig Swain of Leesburg, Virginia.) 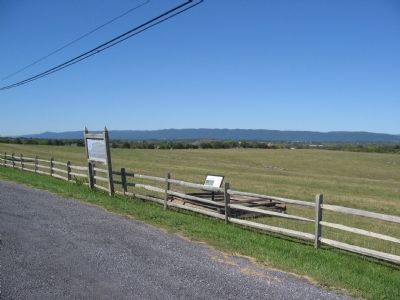 John was a resident of Middletown at the opening of the war, but enlisted in Co. E, 7th Virginia Cavalry at Front Royal. He was listed as 5th sergeant by November 1861. Wounded at Patterson's Creek, Virginia (West Virginia), he died of his wounds on 1/5/64 and was buried in the Stonewall Cemetery, Winchester.

Henry W. Heater was a resident of Front Royal at the opening of the war and also enlisted in Co. E, 7th Virginia Cavalry, though he enlisted at Romney. He is listed as a 3rd corporal in November 1862, and a 2nd corporal by February 1864. Wounded at Funkstown, Maryland on 7/7/63, he was detached on hospital duty in Staunton for several months in 1864. However, he was captured at Point of Rocks, Va. (Loudoun County) on 8/13/64, was paroled at Staunton, and was later "caught with arms and prowling about the country as a guerrilla;" quite a difference between his sentiments and those of his mother. He was confined in Old Capitol Prison, 8/13/64. Following transfer to Ft. Delaware later

Photographed By Craig Swain, September 29, 2007
4. The Heater House
that month, he died on March 18, 1865 of small pox and was buried at Finn's Point Cemetery, New Jersey (though there is a headstone for him at the Stonewall Cemetery in Winchester.
— Submitted March 27, 2009, by Robert H. Moore, II of Winchester, Virginia. 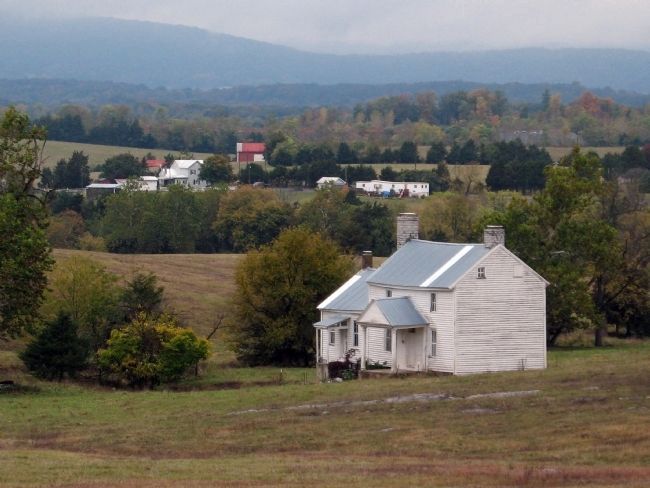 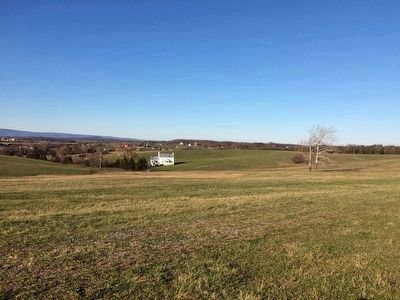 Photographed By Shane Oliver, November 14, 2015
6. View of the Historic Heater House
The Heater House is not open to the public, as the Cedar Creek Battlefield Foundation and National Park Service are currently working to restore the house's interior. The best way to view the house is to pull over into the gravel pull-off near the "Heater House" Marker.
Credits. This page was last revised on September 9, 2020. It was originally submitted on November 5, 2007. This page has been viewed 2,331 times since then and 32 times this year. Last updated on September 7, 2020, by Bradley Owen of Morgantown, West Virginia. Photos:   1, 2, 3, 4. submitted on November 5, 2007, by Craig Swain of Leesburg, Virginia.   5. submitted on October 17, 2014, by Allen C. Browne of Silver Spring, Maryland.   6. submitted on November 28, 2015, by Shane Oliver of Richmond, Virginia. • J. Makali Bruton was the editor who published this page.
Share this page.