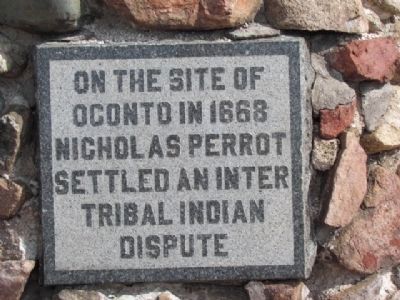 On this site of
Oconto in 1668
Nicholas Perrot
settled an inter
tribal Indian
dispute.

Topics. This historical marker is listed in these topic lists: Native Americans • Notable Events. A significant historical year for this entry is 1668.

Location. 44° 53.294′ N, 87° 52.163′ W. Marker is in Oconto, Wisconsin, in Oconto County. Marker is at the intersection of Main Street and Congress Street, on the left when traveling east on Main Street. Touch for map. Marker is in this post office area: Oconto WI 54153, United States of America. Touch for directions. 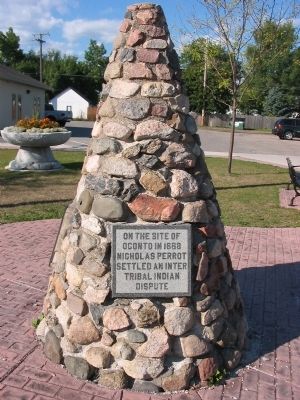 Click or scan to see
this page online
. "He formed a fur trading company around 1667 and undertook expeditions to various tribes and land in and around present-day Wisconsin. He was sometimes the first white man seen by the native peoples and was generally well received." (Submitted on January 25, 2009.)

2. History of Milwaukee, City and County. Nicholas Perrot came to visit the Wisconsin Indians in 1665, having been intrusted by the authorities at Montreal with the task of making peace among the tribes who were "fierce as wild cats, full of mutual jealousies, without rulers and without laws." (Submitted on January 25, 2009.) 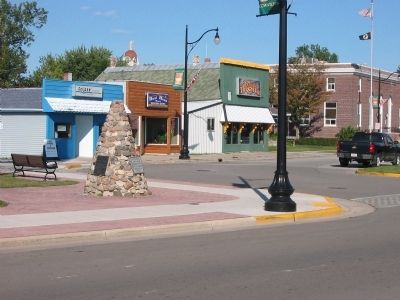