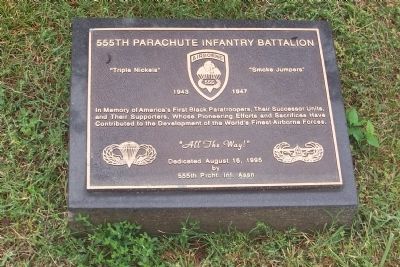 In memory of America's first Black paratroopers, their successor units, and their supporters whose pioneering efforts and sacrifices have contributed to the development of the world's finest airborne forces.
"All the Way!"

Topics and series. This memorial is listed in these topic lists: African Americans • Air & Space • War, Korean • War, World II. In addition, it is included in the National Cemeteries series list. 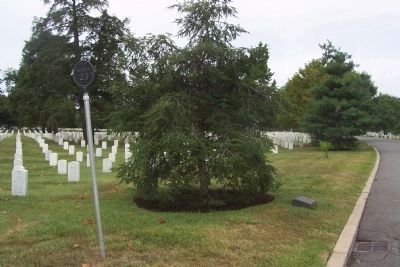 Additional commentary.
Paid Advertisement
Click on the ad for more information.
Please report objectionable advertising to the Editor.
sectionheadg>1. 2nd Ranger Infantry Company (Airborne).
The Triple Nickels' "successor units" include the 2nd Ranger Company (Airborne) which was attached to the 187th Airborne Regimental Combat Team during the Korean War. Veterans of WWII's Operation Fire Fly would be in its ranks during the First UN Counteroffensive and the airborne assault on Munsan-ni, Korea, 23 March 1951. The first and only all-Black unit to ever make a combat parachute jump behind enemy lines, the 2nd Ranger Company achieved all of its objectives at Munsan-ni under the leadership of Captain Warren E. Allen, suffering relatively light casualties, and earning the Bronze Arrowhead for Parachute Assault.
— Submitted January 20, 2009, by Richard E. Miller of Oxon Hill, Maryland.