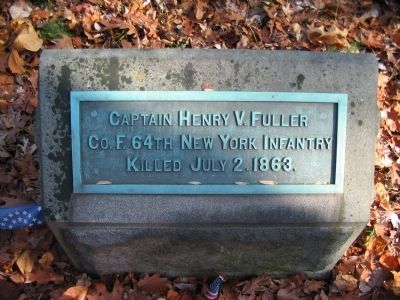 Location. 39° 47.692′ N, 77° 14.71′ W. Marker is in Cumberland Township, Pennsylvania, in Adams County. Memorial can be reached from DeTrobriand Avenue, on the right when traveling east. Located in the Rose Woods, along Rose Run, at Gettysburg National Military Park. Touch for map. Marker is in this post office area: Gettysburg PA 17325, United States of America. Touch for directions. 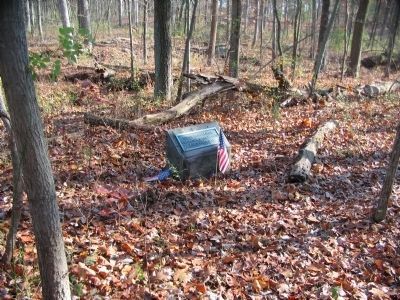 By Craig Swain, November 11, 2008
2. Captain Henry V. Fuller Marker
As the regiment retired from the vicinity of Brooke Avenue, Captain Fuller was wounded in the leg. Assisted by one of his soldiers, Fuller was hit again in the back.

Click or scan to see
this page online
. Captain Fuller is buried in Little Valley New York. (Submitted on January 26, 2009, by Craig Swain of Leesburg, Virginia.)