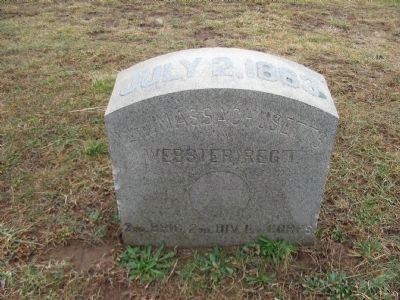 By Craig Swain, December 27, 2008
1. 12th Massachusetts Position Marker
In the center of the marker is a circle or "moon," the symbol of the First Corps.
Inscription.
12th Massachusetts. 2nd Brigade, 2nd Division.
July 2, 1863 12th Massachusetts (Webster) Reg't. 2nd. Brig. 2nd. Div. 1st Corps.. . This memorial was erected in 1885. It is in Cumberland Township in Adams County Pennsylvania

Location. 39° 48.401′ N, 77° 14.105′ W. Marker is in Cumberland Township, Pennsylvania, in Adams County. Memorial is at the intersection of Hancock Avenue and Humphreys Avenue, on the left when traveling north on Hancock Avenue. Located south of the Pennsylvania Memorial in Gettysburg National Military Park. Touch for map. Marker is in this post office area: Gettysburg PA 17325, United States of America. Touch for directions. 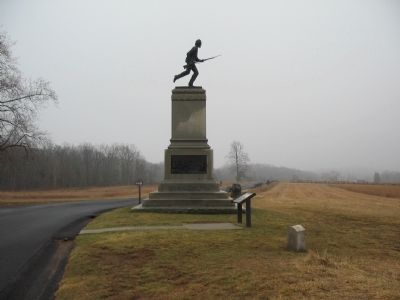 By Craig Swain, December 27, 2008
2. 12th Massachusetts Position Marker
The marker is located next to the 1st Minnesota Infantry Monument. The 12th Massachusetts was one of several 1st Corps units rushed to this sector of the battlefield to shore up the lines. The 1st Minnesota made a desperate charge to gain time for these reinforcements to arrive.

Related markers. Click here for a list of markers that are related to this marker. 12th Massachusetts at Gettysburg.