Signers of the Mecklenburg Declaration of Independence 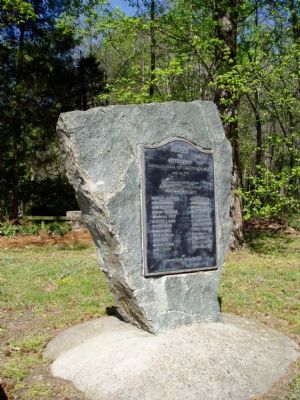 Erected 1967 by Alexandriana Daughters of the American Revolution Chapter.

Topics. This historical marker is listed in these topic lists: Colonial Era • Patriots & Patriotism • War, US Revolutionary. A significant historical month for this entry is May 1780. 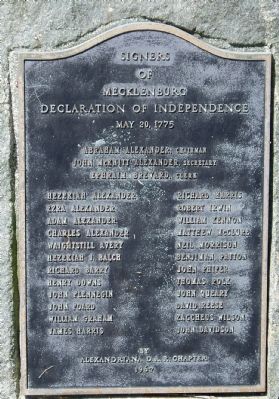 Click or scan to see
this page online
or near this postal address: 9921 Old Statesville Rd, Charlotte NC 28269, United States of America. Touch for directions.

Resolved — That whosoever directly or indirectly abets, or in any way, form, or manner countenances the invasion of our rights, as attempted by the Parliament of Great 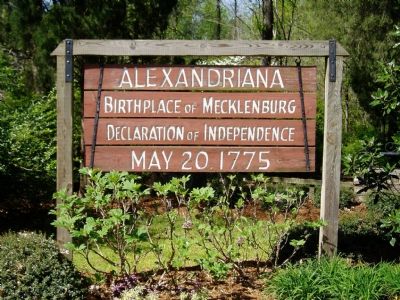 Photographed By John Walker Guss, May 20, 2006
3. Alexandriana, Site of the Signing of the Mecklenburg Declaration of Independence
Britain, is an enemy to his country, to America, and the rights of man.
Resolved — That we the citizens of Mecklenburg County, do hereby dissolve the political bands which have connected us with the mother country, and absolve ourselves from all allegiance to the British Crown, abjuring all political connection with a nation that has wantonly trampled on our rights and liberties and inhumanly shed innocent blood of Americans in Lexington.
Resolved — That we do hereby Declare ourselves free and independent people; that we are, and of a right ought to be, a sovereign and self-governing people under the power of God and the General Congress; to the maintenance which independence we solemnly pledge to each other our mutual co-operation, our lives, our fortunes and our scared honor.
Resolved — That we hereby ordain and adopt as rules of conduct all each of our former laws, and that the crown of Great Britain cannot be considered hereafter as holding any rights, privileges, or immunities among us.
Resolved — That all officers, both civil and military, in the country, be entitled to exercise the same powers and authorities as heretofore; that every member of this delegation shall henceforth be civil officer and exercise the powers of a justice of the peace, issue process, hear and determine controversies according to law, preserve peace, union and harmony in the country, and use every exertion to spread the love of liberty and of country until a more general and better organized system of government be established.
Resolved — That a copy of these resolutions be transmitted by express to the President of the Continental Congress assembled in Philadelphia to be laid before that body.
(signed as per the inscription above)
— Submitted July 15, 2007, by J. J. Prats of Powell, Ohio.
2. Mecklenburg Declaration of Independence
All modern scholarly research to date has been unable to verify the claim that there was in fact such a document called the Mecklenburg Declaration of Independence. There are NO contemporary records mentioning it, and in fact, the alleged Mecklenburg Declaration only came to light in the early 19th century (1818-1819), well after the American Revolution. The Mecklenburg Declaration of Independence is a myth. Note that on this site there is a "recreation" of the document, which should raise alarm bells to all serious researchers and historians. It has been recreated because there was no original document. See Richard N.Current's article "That Other Declaration: May 20, 1775-May 20, 1975" in the North Carolina Historical Review, 1977 54(2): 169-191.
— Submitted November 29, 2007, by John Maass of Washington, District of Columbia.
Credits. This page was last revised on April 18, 2021. It was originally submitted on July 7, 2007, by John Walker Guss of Hillsborough, North Carolina. This page has been viewed 5,892 times since then and 138 times this year. Photos:   1, 2, 3. submitted on July 7, 2007, by John Walker Guss of Hillsborough, North Carolina. • J. J. Prats was the editor who published this page.
Share this page.