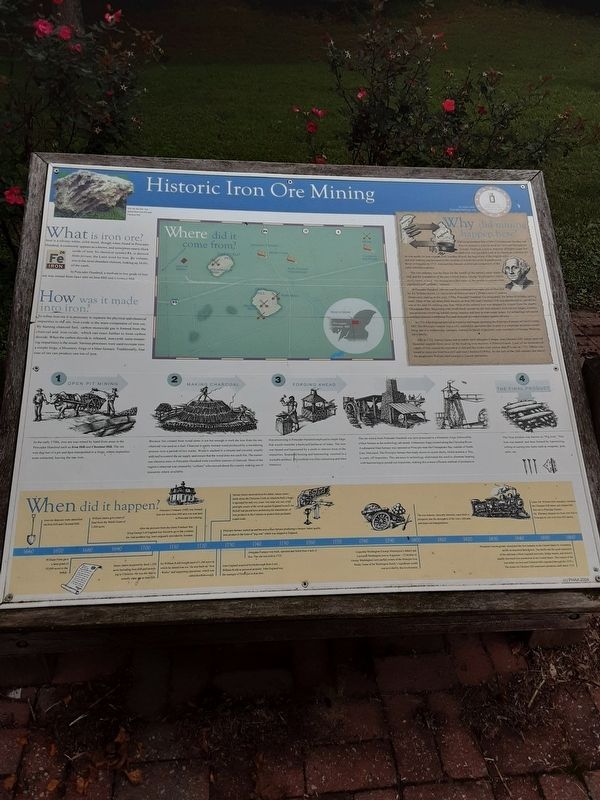 [caption:] Iron ore like this was mined from Iron Hill and Chestnut Hill

What is iron ore?
Iron is a silvery-white, solid metal, though when found in Pencader Hundred, it commonly appears as a brown, and sometimes nearly black oxide of iron. Its chemical symbol Fe, is derived from ferrum, the Latin word for iron. By volume, iron is the most abundant element, making up 34.6% of the earth.

In Pencader Hundred, a medium to low grade of iron ore was mined from open pits on Iron Hill and Chestnut Hill.

How was it made into iron?
To refine iron ore it is necessary to separate the physical and chemical impurities in the ore. Iron oxide is the main component of iron ore. By burning charcoal fuel, carbon monoxide gas is formed from the charcoal and iron oxide, which can react further to form carbon dioxide. When the carbon dioxide is released, iron (with some remaining impurities) is the result. Various processes were used to create iron: a simple forge, a bloomery forge or a blast furnace. Traditionally, four tons of ore can produce one ton of iron. 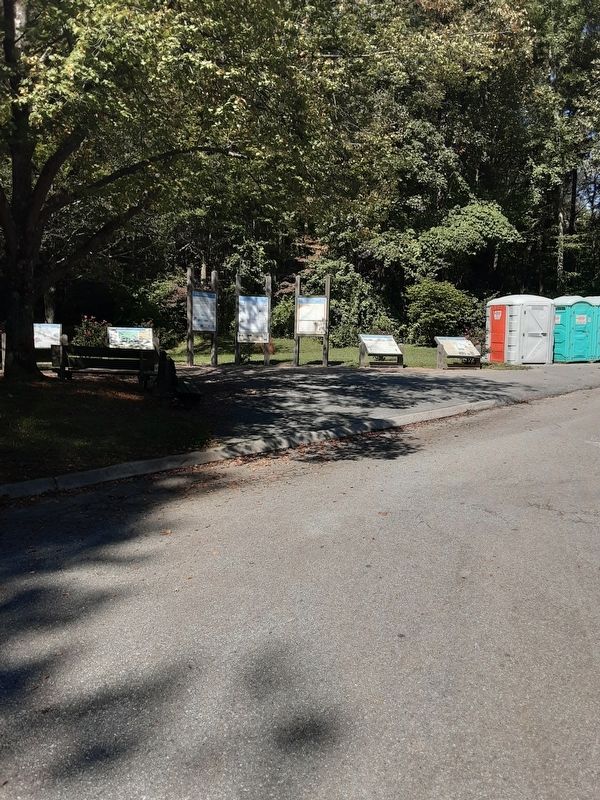 Click or scan to see
this page online
Mining
In the early 1700s, iron ore was mined by hand from areas in the Pencader Hundred such as Iron Hill and Chestnut Hill. The ore was dug out of a pit and then transported to a forge, where impurities were extracted, leaving the raw iron.

2 Making Charcoal
Because fire created from wood alone is not hot enough to melt the iron from the ore, charcoal was used as a fuel. Charcoal is partly burned wood produced by a smoldering process over a period of two weeks. Wood is stacked in a mound and covered, usually with turf to control the air supply and ensure that the wood does not catch fire. The numerous chestnut trees in Pencader Hundred were excellent sources of charcoal. Most of the region's charcoal was created by "colliers" who moved about the country making use of resources where available.

3 Forging Ahead
Iron processing in Pencader Hundred employed a simple forge that would resemble a backyard barbecue of today. The iron was heated and hammered by a smith to remove most of the impurities. Repeated heating and hammering resulted in a workable product. This method was time consuming and labor intensive.

The ore mined from Pencader Hundred was later processed in a bloomery forge followed by a blast furnace as the technology advanced. A bloomery forge existed along the Christina River. A substantial blast furnace was opened at Principio near the Chesapeake Bay outside of North East, Maryland. The Principio furnace had ready access to oyster shells, which acted as a flux to carry off impurities. The advance in technology eliminated the need to alternate heating with hammering to pound out impurities, making this a more efficient method of production.

4 The Final Product
The final product was known as "Pig Iron". This iron was heated and then formed by hammering, rolling or casting into items such as weapons, pots, nails, etc.

Why did mining happen here?
The Great Northern War (1700-1721) between Sweden and Russia created a critical need for iron ore throughout Europe. England, a major importer of highly regarded Swedish iron was forced to look at its American colonies for its iron needs. As iron exports from Sweden slowed, the beginning of the English colonial iron industry can be traced to the creation of iron works on the Rappahannock River in Virginia in 1713. Iron quickly became a principal component of the early colonial economy.

The iron industry was the basis for the wealth of the nation's early leadership and the foundation of the new United States. George Washington's family involvement in local iron mining provided some of the wealth to pursue other significant and profitable ventures.

In Pencader Hundred, iron ore was first extracted from open pits on Iron Hill by Sir William Keith, Lt. Governor of Pennsylvania's Three Lower Counties (Delaware) starting in the early 1700s. Pencader Hundred was principally the home of mining operations. Most of the ore taken from the pits of Iron Hill and Chestnut Hill was transferred to operations out of the area for refining into iron. Most of the refined iron was shipped for export from the nearby Chesapeake Bay. Beginning with small batch operations the iron industry evolved into larger continuous processes involving natural energy sources and then to man-made steam. As technology advanced, a unique process combining flux and charcoal provided a better quality of iron.

In 1723 John England arrived in America and began operating the Principio Furnace in Cecil County, MD. The Principio venture was a very successful operation due in part to a corporate structure resembling one of a modern-day company. Among its board of directors were members of George Washington's family.

Also in 1723, Samuel James and investors built Abingdon Furnace near Chestnut Hill. James received financial support from some of the leading iron masters in Pennsylvania. Lack of an economical supply of flux caused the operation to fail and the works were sold at sheriff's sale in 1735. Others continued to mine ore from Iron Hill and later Chestnut Hill but, by the turn of the 20th century, the last of the proprietors William McConaughey ceased operations.

When did it happen? [timeline]

[between 1660 and 1670]
Iron ore deposits were identified on Iron Hill and Chestnut Hill.

[between 1710 and 1720]
After the pressure of the Great Northern War, King George I of England was forced to go to the colonies for vital products (eg. iron) originally provided by Sweden.

[about 1720]
Principio Company (MD) was formed. Iron ore from Iron Hill was sent later to Principio for refining.

[chronological order between 1720 and 1730]
Samuel James received from his father, James James, lands along the Christina Creek on which he built a forge; it operated for only two years. Iron later was one of the principal causes of the revolt against England because the British had passed laws prohibiting the manufacture of iron products in the the Colonies to protect their profitable export trade. [ --- ]
Sir William Keith bought land of 1,260 acres in which he mined iron ore. He also built an "Iron Works" and supporting operations, which was called Keithsborough. [ --- ]
[next 2 items shown occurring at same time]
Principio furnace started up and became a blast furnace producing a cheaper, better quality iron product in the form of "pig iron" which was shipped to England. [ --- ]
John England acquired Keithsborough from Lord William Keith as personal property. John England was the manager of Principio at that time.

[about 1800, but reaching back to about 1720]
Augustine Washington (George Washington's father) and Lawrence Washington (son to Augustine - 1/2 brother to George) were partial owners of the Principio Iron Works. Some of the Washington family's significant wealth was provided by this involvement.

[about 1800]
The iron industry, basically dormant, came back in prosperity due to the insurgence of the wars, railroads, and improved transportation.

[between 1840 and 1850]
Later, Mr. William McConaughey operated the Chestnut Hill mines and shipped the iron ore to Principio furnace.
Mr. Whitaker shipped ore from Iron Hill to Principio by rail from the Iron Hill station.

[about 1860; Lincoln became President on 4 March 1861]
President Lincoln greatly stimulated the iron industry in the United States by increasing tariffs on imported British iron. The tariffs and the great expansion of the railroads (which required steel rails, bridge beams, and wheels) rapidly increased iron production in the eastern United States. The owners of the iron mines on Iron and Chestnut hills operated through the 1870s. The mines on Chestnut Hill continued operation until about 1914.

Topics. This historical marker is listed in these topic lists: Colonial Era • Industry & Commerce • Wars, Non-US. A significant historical year for this entry is 1713.

Location. 39° 38.342′ N, 75° 45.367′ W. Marker is near Newark, Delaware, in New Castle County. Marker is on Robert L. Melson Lane near Whitaker Road, on the left when traveling north. Although Whitaker Road is named above (because Robert L. Melson Lane intersects it), the Lane is blocked at Whitaker Road, so Iron Hill Park, which includes this marker, has to be reached by road from Old Baltimore Pike. Touch for map. Marker is in this post office area: Newark DE 19702, United States of America. Touch for directions.