— Placed on the National Register of Historic Places - 1976 — 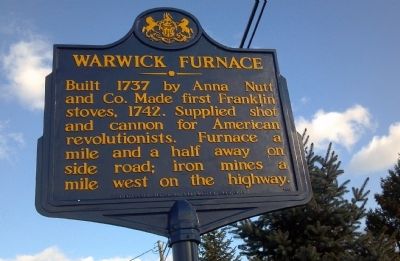 Photographed By Keith S Smith, January 3, 2012
1. Warwick Furnace Marker
Inscription.
Warwick Furnace. . Built 1737 by Anna Nutt and Co. Made first Franklin stoves, 1742. Supplied shot and cannon for American revolutionists. Furnace a mile and a half away on side road; iron mines a mile west on the highway. . This historical marker was erected in 1947 by Pennsylvania Historical and Museum Commission. It is in Warwick Township in Chester County Pennsylvania

Built 1737 by Anna Nutt and Co. Made first Franklin stoves, 1742. Supplied shot and cannon for American revolutionists. Furnace a mile and a half away on side road; iron mines a mile west on the highway.

Topics and series. This historical marker is listed in these topic lists: Colonial Era • Industry & Commerce • Notable Places. In addition, it is included in the Pennsylvania Historical and Museum Commission series list. A significant historical year for this entry is 1737.

Location. 40° 9.812′ N, 75° 45.341′ W. Marker is in Warwick Township, Pennsylvania, in Chester County. Marker is at the intersection of Ridge Road (Route 23) and Warwick Furnace Road, on the left when traveling west on Ridge Road. Touch for map. Marker is at or near this postal address: 2423 Ridge Rd, Elverson PA 19520, United States of America. Touch for directions.

Other nearby markers. At least 8 other markers are within 4 miles of this marker, measured as the crow flies. Colonel Thomas Bull (approx. 2.2 miles away); Headraces (approx. 3.1 miles away); Charcoal Kilns (approx. 3.1 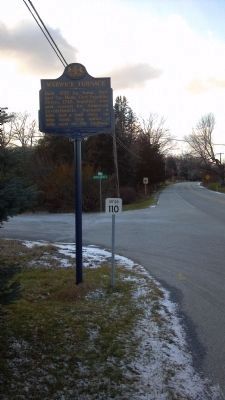 More about this marker. Note the clean look of this marker, as well as the pile of dirt at its base. This marker has been recently restored. The date can be seen in the enlarged image, however it was not painted yellow like the rest of the text.

Additional commentary.
1. A History of Warwick Furnace:
In the years of colonization prior to the Revolutionary War, a group known as the Ironmasters migrated to North America from England. These individuals had been operating forges and furnaces in England and now sought to make a new fortune for themselves in America. Samuel Nutt was one of those Quaker’s; he relocated to Chester County, Pennsylvania, west of 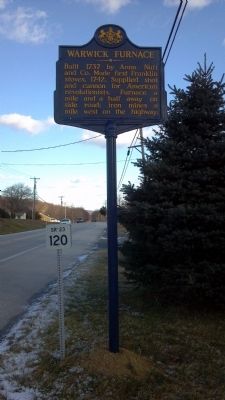 He eventually relocated near the village of Warwick, in northern Chester County; Warwick Furnace was established in 1737 by his widow Anna Nutt. Samuel Nutt was an English Quaker who had already built an ironworks nearby at Coventry. Nutt named his wife, a nephew, Samuel Nutt, Jr., and Samuel Savage as his successors. He also directed in his will that the heirs should build a furnace on 120 acres of land on the south branch of French Creek. In accordance with the will, Anna constructed the furnace 1737. In doing so, she retained the ironworkers as well as the miners, forge men, colliers, blacksmiths, teamsters, and woodcutters her late husband had hired.

Samuel Nutt, Jr., died in 1739 he was 21 years of age, the furnace reverted to the remaining heirs, Anna Nutt & Samuel Savage, who continued the operations until 1741. Samuel Savage died in 1742 and the furnace was operated from 1741 to 1752 by George Taylor who had married the widow of Samuel Savage Jr., Taylor also ran the Coventry Forge which was one of a few neighboring furnaces and forges. When Samuel Savage, III, was old enough to run the mill, George Taylor was discharged by the other share owners of Warwick Furnace. At that time around 1752-1753, George Taylor went into a partnership with yet another man named 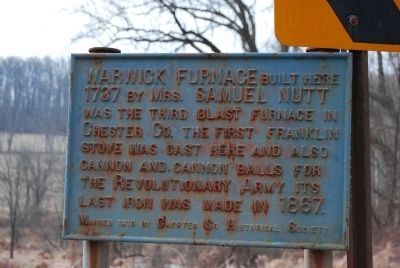 Photographed By Mike Wintermantel, January 19, 2014
4. Warwick Furnace Marker
Warwick Furnace built here 1737 by Mrs. Samuel Nutt
Was the third blast furnace in Chester Co. The first Franklin Stove was cast here and also cannon and cannon balls for the Revolutionary Army. Its last iron was made in 1867.
Marker placed at site by Chester County Historical Society
Samuel, Samuel Flower. Taylor and Flower operated the Durham Furnace located in Northern Bucks County, Pennsylvania. George Taylor went on to become a member of the Continental Congress and was a signer of the Declaration of Independence.
— Submitted January 5, 2012, by Keith S Smith of West Chester, Pennsylvania. 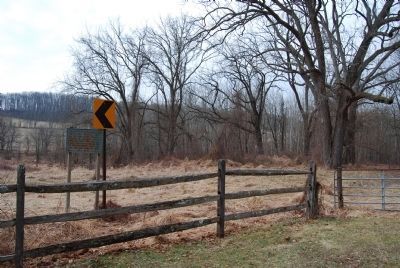 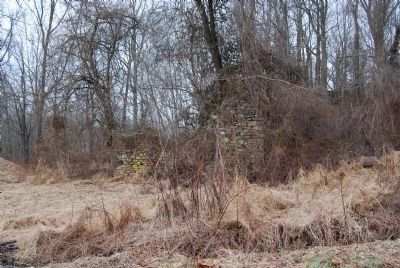