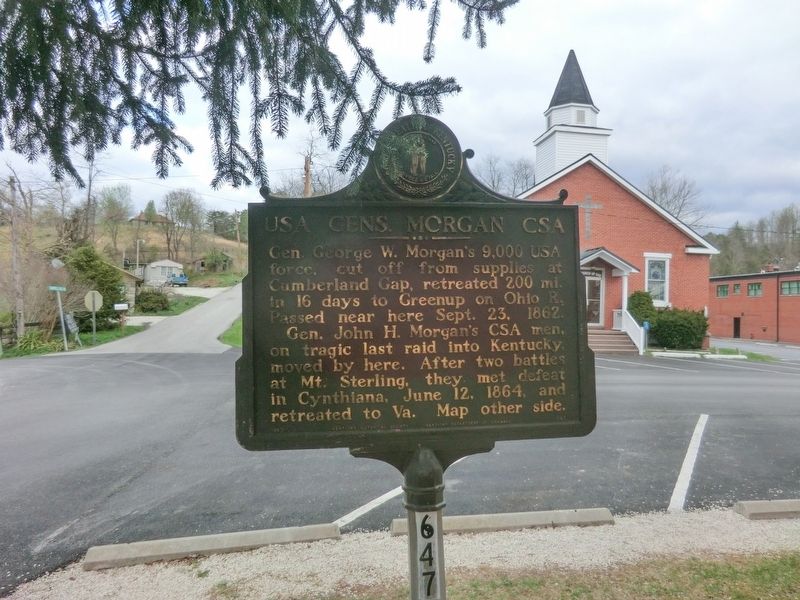 Photographed By Don Morfe, April 15, 2014
1. USA Gens. Morgan CSA Marker-Side 1
Inscription.
USA Gens. Morgan CSA. Confederate Raids and Invasions, and a Federal Retreat, in Kentucky. Gen. George W. Morgan's 9,000 USA force, cut off from supplies at Cumberland Gap, retreated 200 mi. in 16 days to Greenup on Ohio R. Passed near here Sept. 23, 1862. Gen. John H. Morgan's CSA men, on tragic last raid into Kentucky moved by here. After two battles at Mt. Sterling, they met defeat in Cynthiana, June 12, 1864 and retreated to Va. Map other side. . This historical marker was erected in 1963 by Kentucky Historical Society-Kentucky Department of Highways. It is in Campton in Wolfe County Kentucky

Topics and series. This historical marker is listed in this topic list: War, US Civil. In addition, it is included in the Kentucky - Confederate Raids and Invasions, and a Federal Retreat, and the Kentucky Historical Society series lists. A significant historical date for this entry is June 12, 1860.

Location. 37° 44.101′ N, 83° 32.837′ W. Marker is in Campton, Kentucky, in Wolfe County. Marker is on Court Street. The marker is located on the grounds of the Wolfe County Courthouse. Touch for map. Marker is at or near this postal address: 10 Court St, Campton KY 41301, United States of America. Touch for directions.

Other nearby markers. At least 8 other markers are within 9 miles of this marker, measured as the crow flies. Wolfe County, 1860 (here, next to this marker); Swift's Silver Camp 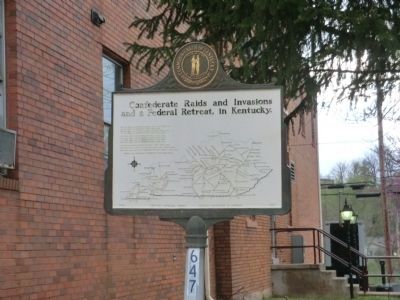 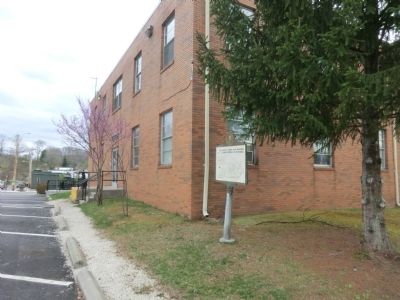