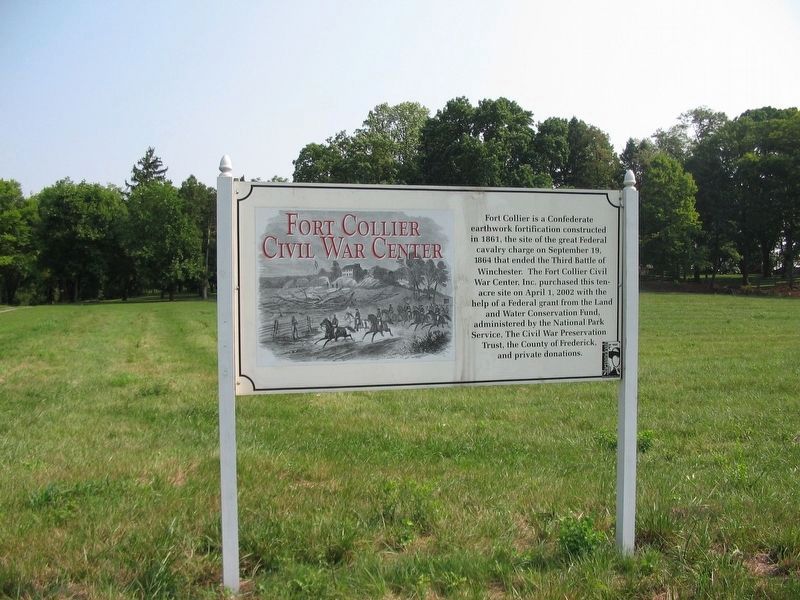 Fort Collier is a Confederate earthwork fortification constructed in 1861, the site of the great Federal cavalry charge on September 19, 1864 that ended the Third Battle of Winchester. The Fort Collier Civil War Center, Inc., purchased this ten acre site on April 1, 2002 with the help of a Federal grant from the Land and Water Conservation Fund, administered by the National Park Service, The Civil War Preservation Trust, the County of Frederick, and private donations.

Topics. This historical marker is listed in these topic lists: Forts and Castles • War, US Civil. A significant historical date for this entry is April 1, 2002.

Location. Marker has been reported permanently removed. It was located near 39° 12.032′ N, 78° 9.309′ W. Marker was near Winchester, Virginia, in Frederick County. Marker was at the intersection of Brooke Road (Virginia Route 1322) and Brick Kiln Road (Virginia Route 783), on the right when traveling east on Brooke Road. Touch for map. Marker was at or near this postal address: 909 Martinsburg Pike, Winchester VA 22601, United States of America. Touch for directions.

Other nearby markers. At least 8 other markers are within walking distance of this location. 2nd Battle of Winchester (within shouting distance of