Industry Evolution on the Broad River

From Henderson Island to the Fairfield Pumped Storage Facility 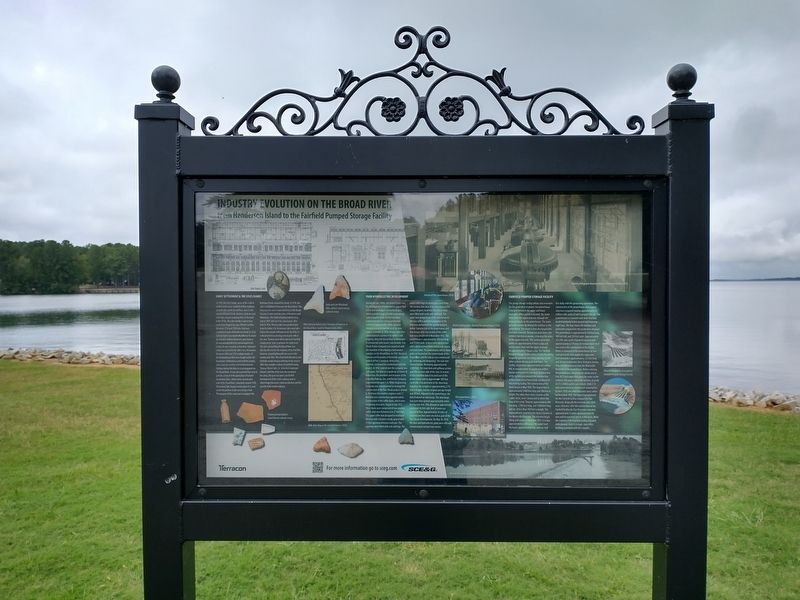 Early Settlement and the Lyles Family
In 1745, the Lyles family, some of the earliest settlers in the area, established their holdings on both sides of the Broad River, close to the mouth of Beaver Creek. Brothers, Ephraim and John Lyles, began acquiring titles to the land in the 1750s. The Lyles family is said to have come from Virginia by way of North Carolina. Between 1750 and 1780 Lyles Ford was established south of Henderson island. In 1764, Ephraim Lyles was reportedly killed at his home by Cherokee Indians; however, some believe he was actually killed by citizens loyal to the crown. As was common at that time, Ephraim’s estate was passed to his eldest son, Arromanus. Between 1780 and 1782 multiple battles of the Revolutionary War were fought within the boundaries of Newberry and Fairfield counties. Lyles Ford was used by several detachments fighting during this time as a crossing point on the Broad River. It was also reported that several patriots camped at the plantation of Colonel Arromanus Lyles, whose home was located east of the Broad River. Sometime around 1780, Arromanus Lyles began construction of a canal on the Broad 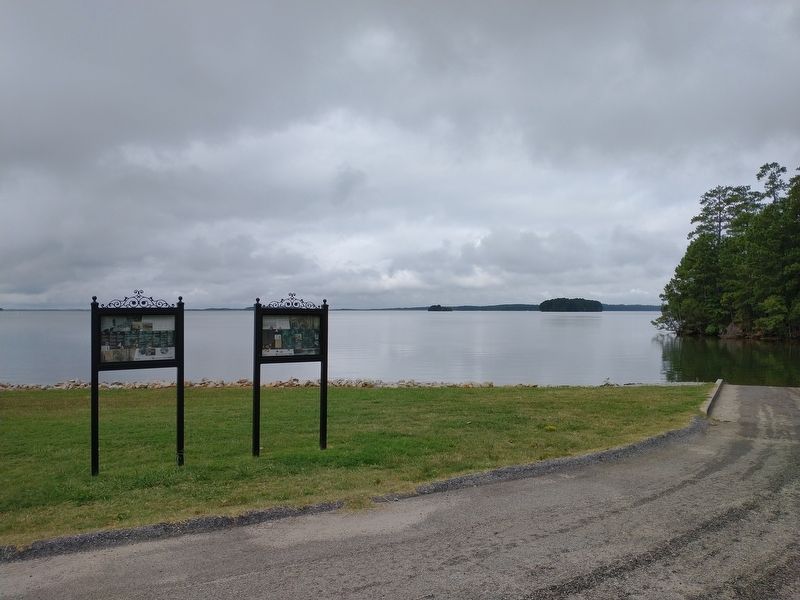 Photographed By Tom Bosse, September 10, 2020
2. Industry Evolution on the Broad River Marker
Marker is on the right.

Click or scan to see
this page online
River in the area of Lyles Ford. The purpose of this canal was to navigate flat bottomed boats around the shoals. In 1796, the Lyles established a ferry over the Broad River. This ferry was the most important ferry on the Broad because it connected the cities of Newberry and Winnsboro. The Ashford family took the ferry over in 1807 and ran it for several years after that. In 1816, Thomas Lyles was granted land from his father, Col. Arromanus Lyles near Lyles Ford at the mouth of Beaver Creek. By 1850, he is documented as owning several grist mills in the area. Thomas went on to represent Fairfield County in the State Legislature for eight years. The rea surrounding the Broad River was directly affected for the majority of the Civil War, however, actual fighting did not occur in the vicinity until 1865. Men from both Newberry and Fairfield counties began enlisting in the army in 1861. One notable resident of Fairfield County, Thomas Minter Lyles, Jr., served as Lieutenant Colonel, with five of his sons also serving in the army. The post war years saw further development of the state’s railway system, which helped increase cotton production and the growth of the textile industry. 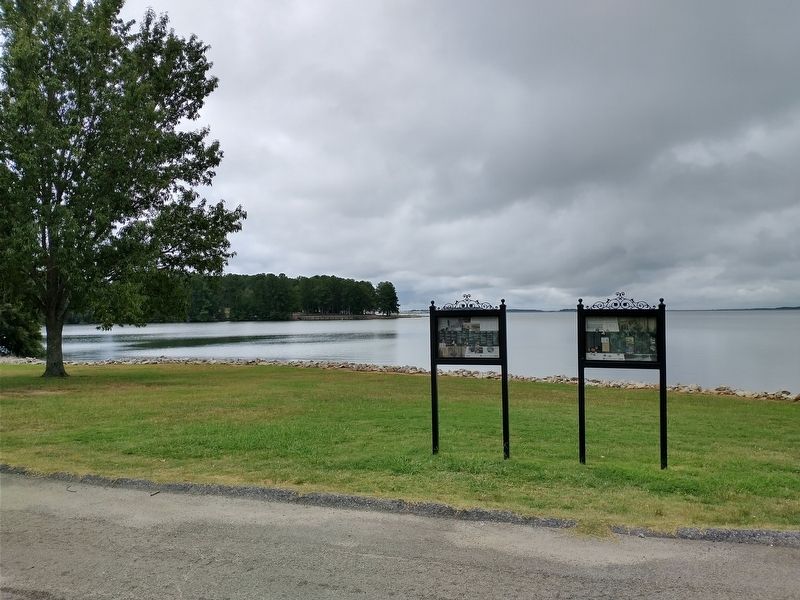 Photographed By Tom Bosse, September 10, 2020
3. Industry Evolution on the Broad River Marker
Marker is on the right.
period artifacts found during cultural survey.
Mills Atlas Map of the Fairfield District (1825).

Parr Hydroelectric Development
During the late 1800s, the United States saw the development of hydroelectric power that led to new techniques and technologies, which provided ways to build on previously undeveloped lands. As the Columbia Canal’s potential for energy production had been tapped in the 1890s, forward thinking investors saw the need for new sources of power. In 1896, Henry Larkin Parr commissioned a survey of his father’s mill property along the Broad River to determine if commercial water power was feasible. Parr Shoals Power Company was organized with the intention of developing a hydropower complex on the Broad River. In 1907, Alester G. Furman and Associates of Greenville purchased control of Parr’s company. Henry Parr, however, continued his involvement with the project. In 1912, control over the company was sold again, this time to a syndicate of Edwin W. Robertson, the president and treasurer of the Columbia Railway, Gas, and Electric Company. Experienced designer J.G. White Engineering Company was commissioned to manage the construction of the Parr Shoals project. George G. Shed was the resident engineer and J.T. McLellan was construction superintendent. Construction of the coffer dams, which were temporary structures, began in July 1912. These dams were comprised of two wooden doffers that were between 6 to 27 feet high. The upper coffer was designed to hold back the river with crib piers evenly spaced with 12 foot openings between each pier. The openings were filled with rock and logs. The lower coffer kept the backwater away from the construction area. It too was constructed using crib piers; however, the crib sections were filled with earth and solid rock. The water was pumped out of the area between the two coffers and the foundation of the dam was anchored to the granite bedrock below. Construction of the powerhouse and dam began after one section of the coffer dam was completed in November 1912. The powerhouse is approximately 300 feet long and 52 feet wide. It has a steel substructure with a brick exterior finish laid in a six-course common bond. The powerhouse and six sluice gates are located on the eastern back of the Broad River and the tailrace was constructed by “widening and deepening” the east river channel below. Measuring approximately 2,000 feet, the main dam and spillway section span the western side of the river. A section of non-overflow dam is located east of the powerhouse and an approximate 300 foot earth dike is located west of the sluiceway. Together, the complex is approximately 2,715 feet in length, and the original average height was 39 feet. Adjacent to the powerhouse, the dam featured six sluiceways. The sluiceways had gates that opened approximately seven feet by nine feet. This allowed an approximate combined 14,400 cubic feet of water per second to flow. Approximately 30 miles of transmission lines were erected as part of the Parr Shoals Development. On May 30, 1914, the dam and hydroelectric plant were officially commissioned and put into service.

Topics. This historical marker is listed in these topic lists: Colonial Era • Industry & Commerce • Settlements & Settlers • Waterways & Vessels. A significant historical date for this entry is May 30, 1914.

Location. 34° 19.642′ N, 81° 17.143′ W. Marker is in Monticello, South Carolina, in Fairfield County. Marker is on Monticello Road (State Highway 215) 0.3 miles north of Baltic Circle, on the left when traveling north. Marker is located at the boat ramp north of Lake Monticello Park. Touch for map. Marker is in this post office area: Jenkinsville SC 29065, United States of America. Touch for directions.