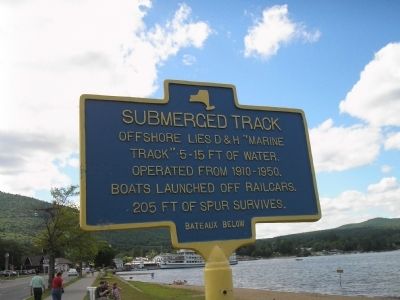 Erected 2002 by Bateaux Below, Incorporated.

Topics. This historical marker is listed in these topic lists: Railroads & Streetcars • Waterways & Vessels. A significant historical year for this entry is 1910.

Location. 43° 25.114′ N, 73° 42.376′ W. Marker is near Lake George, New York, in Warren County. Marker is at the intersection of Beach Road and Fort George Road, on the left when traveling east on Beach Road. Marker is on the Lake George waterfront, across from Lake George Battlefield Park. Touch for map. Marker is in this post office area: Lake George NY 12845, United States of America. Touch for directions. 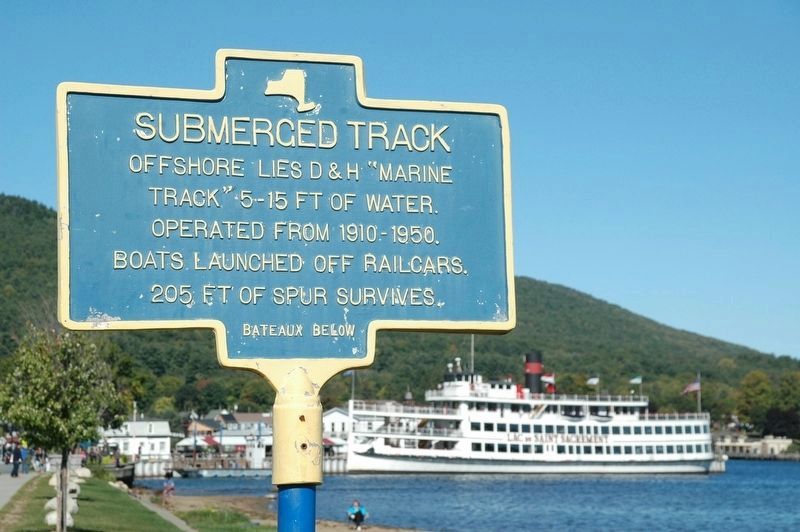 Regarding Submerged Track. From a point nearby, a side track nicknamed the "Submarine Railway" sloped off into Lake George. The track extended just over 200 feet into the lake, ending about 15 feet below the surface. Rail cars linked to a steel cable were lowered into the water to a depth where boats could float free of their cradles. From this track many a Chris Craft, Gar Wood, and similar pleasure boats were delivered directly into Lake George. The unique track provided nearly 40 years of service before its retirement and partial removal in 1950. Today a significant portion of the track is preserved under water. 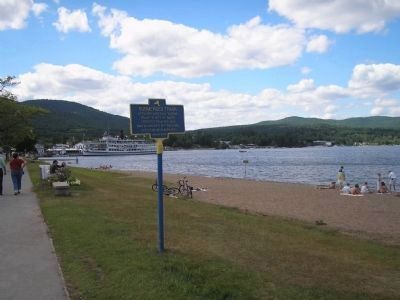 Photographed By Bill Coughlin, July 10, 2008
4. Submerged Track Marker
A track of the Delaware & Hudson Railroad curved from the railroad station to the steamboat pier seen in the background.