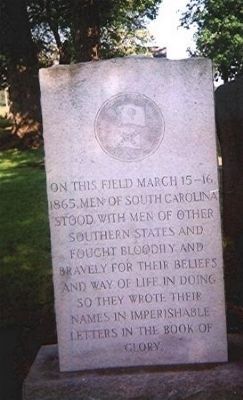 On this field March 15-16, 1865, men of South Carolina stood with men of other Southern States and fought bloodily and bravely for their beliefs and way of life. In doing so they wrote their names in imperishable letters in the book of glory.

Topics. This historical marker is listed in these topic lists: Patriots & Patriotism • War, US Civil. A significant historical date for this entry is March 15, 1865.

Location. 35° 15.823′ N, 78° 40.367′ W. Marker is near Dunn, North Carolina, in Harnett County. Marker can be reached from Burnett Road (State Highway 82) half a mile north of Magurder Rd., on the right when traveling north. The South Carolina and other Confederate State markers and monuments are located at the Averasboro Cemetery one mile south of the museum. Touch for map. Marker is in this post office area: Dunn NC 28334, United States of America. Touch for directions. 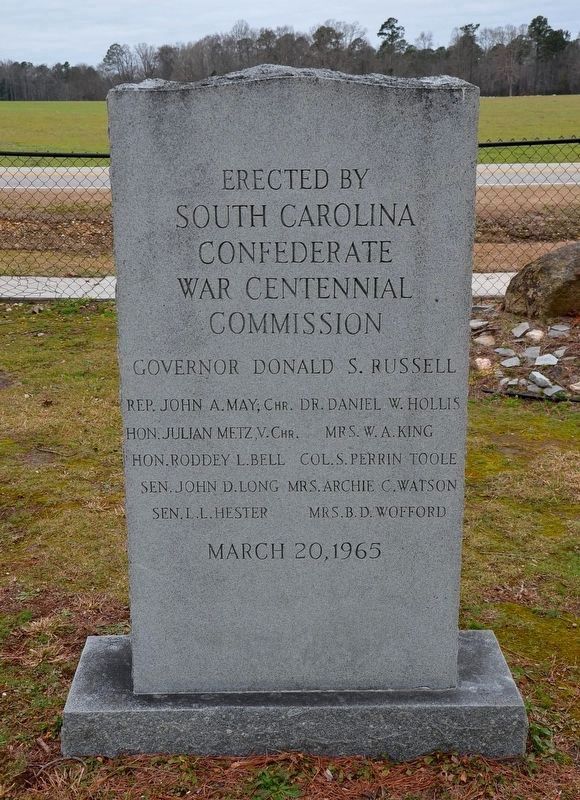 More about this marker. The battlefield is small compared to others like Gettysburg or Sharpsburg, yet it is one of the most beautiful locations on a dedicated War of the Confederate States and United States battlefield tour.

Regarding South Carolina Troops at Battle of Averasboro, NC. South Carolina was the first state to secede from the United States and was the example for other states considering independence. South Carolina troops were the first to battle when US troops refused to leave South Carolina soil peaceably.
Almost four years later South Carolinians fought General Slocum's Yankees on the field of Averasboro. They fired and charged with personal fury against the same Yankees that sacked and burned their homes in South Carolina after Sherman's "March to the Sea" the earlier winter.
Though outgunned and half starved General Hardee again gave battle at Bentonville days after. Inevitably the brave South Carolinans and their comrades surrendered with General Johnston 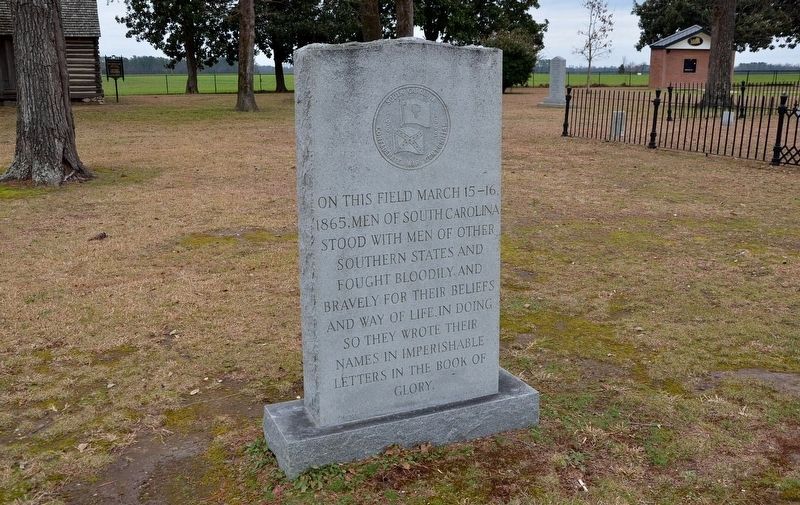 Photographed By Karl Stelly, January 16, 2017
3. South Carolina Troops at the Battle of Averasboro, North Carolina
Viewed from a different angle
at Bennett Place in Durham a month later. 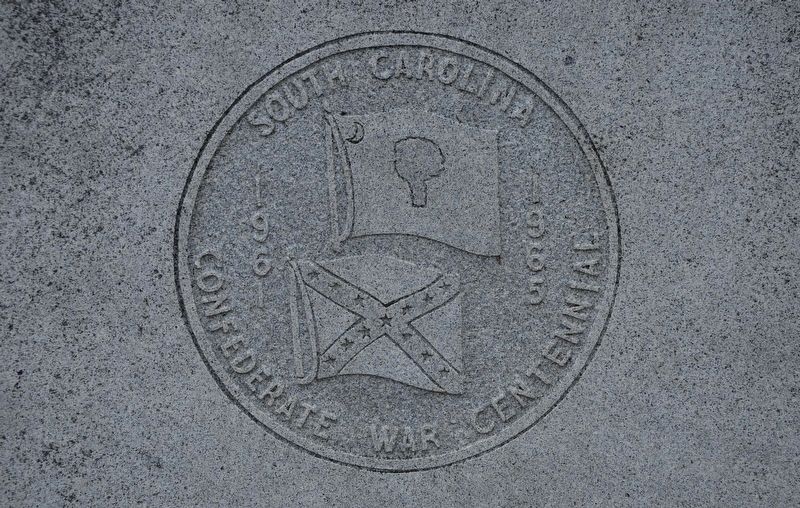 Photographed By Karl Stelly, January 16, 2017
4. South Carolina Troops at the Battle of Averasboro, North Carolina
Closeup of the South Carolina Confederate War Centennial emblem on the front
Credits. This page was last revised on December 2, 2020. It was originally submitted on September 9, 2011. This page has been viewed 718 times since then and 21 times this year. Last updated on November 30, 2020, by Bradley Owen of Morgantown, West Virginia. Photos:   1. submitted on September 9, 2011, by Zacharias Beau T of Alpine, Texas.   2, 3, 4. submitted on February 5, 2017, by Karl Stelly of Gettysburg, Pennsylvania. • Bernard Fisher was the editor who published this page.
Share this page.