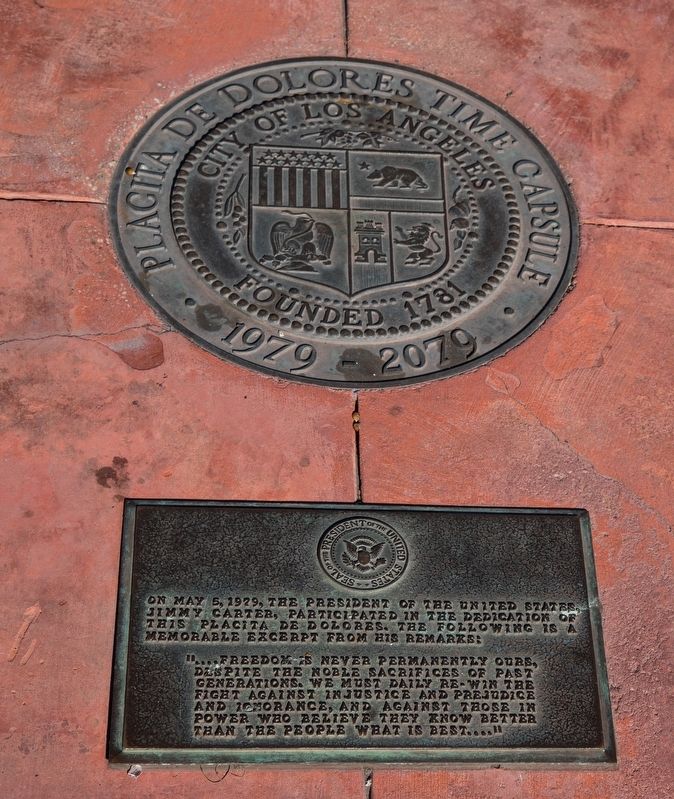 “... Freedom is never permanently ours, despite the noble sacrifices of past generations. We must daily re-win the fight against injustice and prejudice and ignorance, and against those in power who believe they know better than the people what is best. ...”

On May 5, 1979, the President of the United States, Jimmy Carter, participated in the dedication of this Placita de Dolores. The following is a memorable excerpt from his remarks:

“... Freedom is never permanently ours, despite the noble sacrifices of past generations. We must daily re-win the fight against injustice and prejudice and ignorance, and against those in power who believe they know better than the people what is best. ...”

Topics and series. This historical marker is listed in these topic lists: Government & Politics • Hispanic Americans • Notable Places. In addition, it is included in the Time Capsules series list.

Other nearby markers. At least 8 other markers are within walking distance of this marker. Plaza Substation (a few steps from this marker); Antonio Aguilar 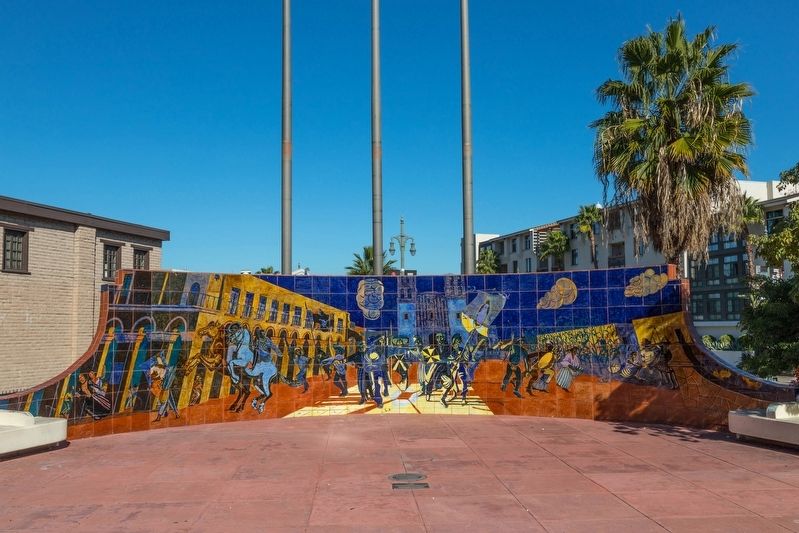 Also see . . .
1. Background Information. Brief sketch dated 1999 by Michael Several where he summarizes the Cry for Independence and describes the mural’s depiction of it. Excerpt:

The revolution for Mexican independence from Spain began on the evening of September 15, 1810. Ignacio Perez, sent by Dona Josefa Dominquez, informed Juan de Aldama, Captain Ignacio Allende and Father Miguel Hidalgo in the town of Dolores that the government had discovered their planned revolt. The following morning, church bells called hundreds of peasants to the town square where they heard the leader of the conspiracy, Fr. Hidalgo, cry out for independence (“El

1979 mural by Eduardo Carillo. Photographed by J.J. Prats, December 4, 2018
3. “El Grito: The Cry for Freedom
1979 ceramic tile mural by Eduardo Carillo at the Placita de Dolores, Los Angeles, California. It is made up of 300 one-foot-square hand-made ceramic tiles and is approximately 8 feet high by 44 feet wide.
Grito”). A large peasant army quickly mobilized while the revolution spread to other regions of Mexico. However, in March 1811, Hidalgo, Aldama and Allende were defeated near Guadalajara and captured. They were executed a few months later, but the revolution continued until independence was won in 1821. At the conclusion of the revolt, Spanish control of Los Angeles ended, and for 26 years the city was an integral part of Mexico.

2. El Grito: The Cry for Freedom. Multipage images of the mural and interpretive text. The page includes photos and a video of the artist creating the tiles for the mural. “The mural commemorates the instigating call, el grito, made in 1810, by Father Hildalgo.” ... “Carillo invited a team of interested students to help with all phases of the firing and installation process. By aprenticing, the students gained valuable experience in the art of large-scale mural design and construction of a permanent public art piece.” (Submitted on December 8, 2020.)

Each year Mexican people celebrate the 16th of September in commemoration of the 1810 start of what became the Mexican independence movement. The colorful patriotic festival 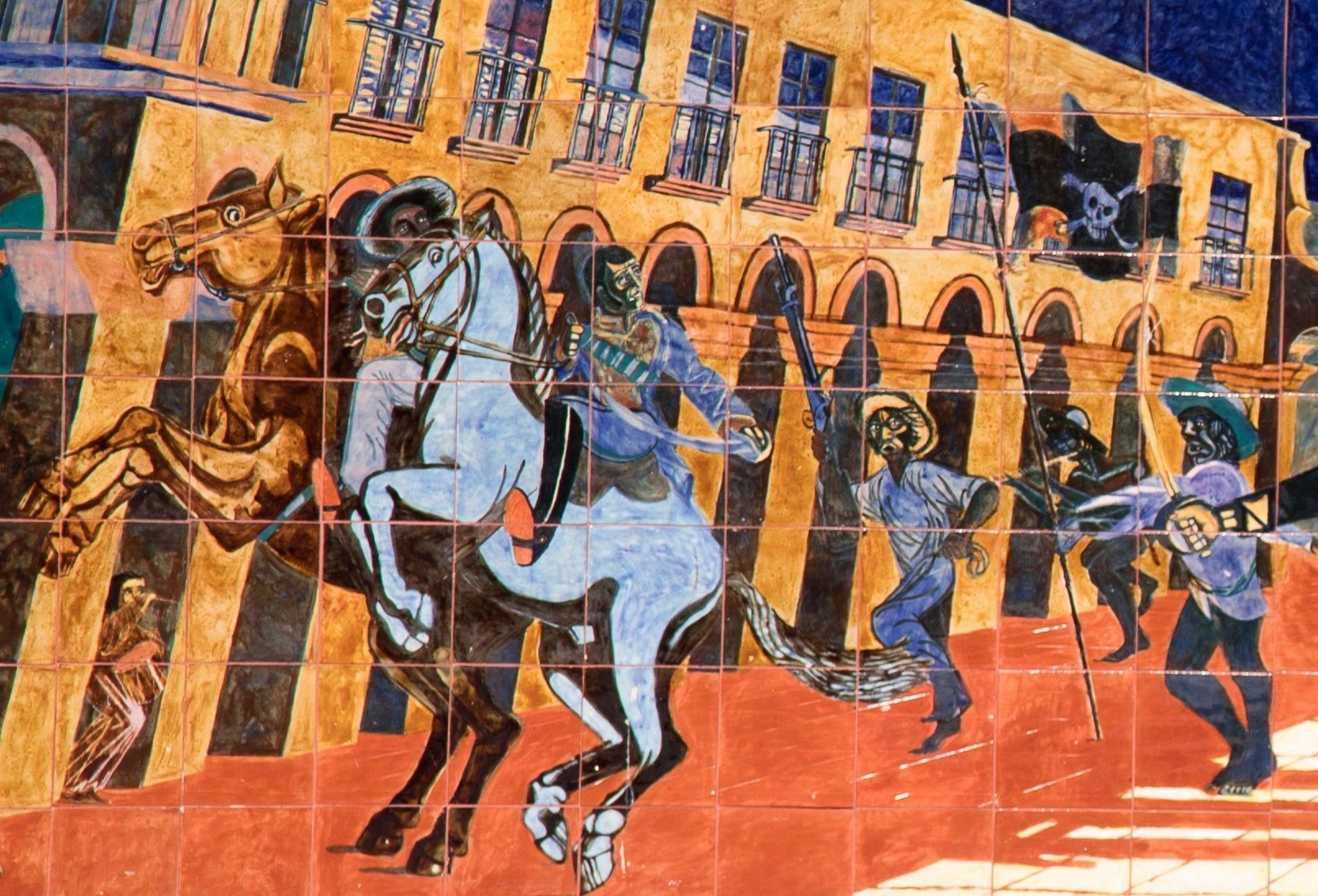 1979 mural by Eduardo Carillo. Photographed by J.J. Prats, December 4, 2018
4. “El Grito: The Cry for Freedom" Left Panel Detail
Captain Ignacio Allende is depicted riding the blue horse, next to Ignacio Perez on the brown horse, riding out of town to carry the Cry for Freedom to the rest of the country. Behind the horses holding the rifle is Jose Maria Morelos, the leader of the revolt. A soldier bears the flag of the revolution, a skull and crossbones.
is celebrated not only within Mexican national boundaries, but also on the other side of its northern border wherever great concentrations of Mexican communities are found. In Los Angeles, California the demographic and cultural strength of the Mexican community – the second largest in the world after Mexico City – makes celebrating the annual “fiestas patrias” an indispensable local tradition. A colorful ceramic mural located in the historic heart of L.A. titled El Grito (“The Cry”) celebrates Mexico’s independence and as well as the heritage of the city’s vibrant Mexican American community. ...