History of the Wapsipinicon Mill
March 7, 1867 the Independence Mills Co. was organized for the purpose of buying water power and building a custom and merchants flouring mill. Work began immediately and began operation as a flouring mill August 1, 1870. The total costs were $100,000 for the mill and water privileges. The building is a timber frame with brick veneer on the outside — 6 stories high (including basement) 112' long x 62' wide x 102' high.

There are over 100 windows of different shapes and sizes. The windows were for light and ventilation. Combustion of dust caused explosions & fire. In 2012 signatures were discovered on the window casing of some of the 5th floor windows. On the first floor (now basement) remain 4 window openings to the street that have never been used. This space was filled in with limestone and dirt on the outside, covering the space completely.

Water enters the Mill through arches at the north end of the building. Metal trash racks cover the arches preventing debris from entering the Mill. The weight or pressure of the flowing water turns the turbine wheels. The turbines provide 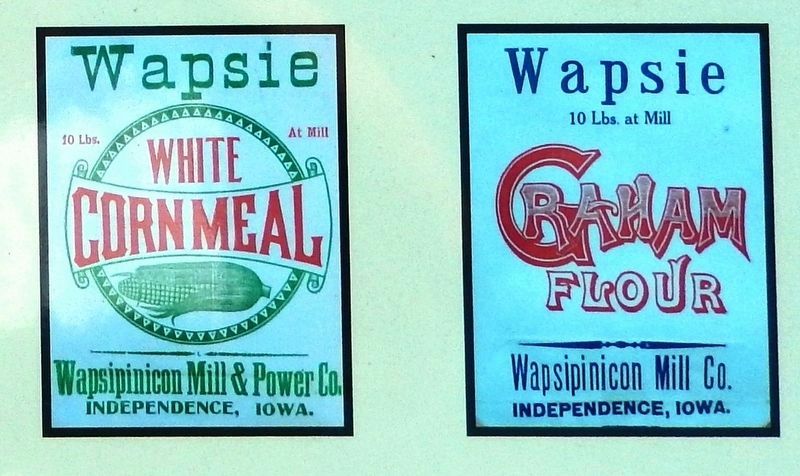 1909 Wapsipinicon Mill & Power Company was incorporated. In the 1930's the mill stopped processing flour and focused strictly on custom grinding for livestock feed.

Antique Rock Puller
The iron implement to your left is a rock puller. One man operated this tool, along with his oxen or horses. The operator placed the implement over the top of the native boulder and winched it upward, out of the soil. Once removed, the farmers transported the stones to the construction site.

West Wall of the Mill
Look up (under the windows) shows deep grooves along the wall. These were made by the wagon hubs that scraped the bricks as the farmers got as close to the mill wall as possible, to ensure, grain, corn or meal did not miss the wagon. Chute exits are visible where bricks were inserted in.

Horse Hitch
The granite horse hitch was moved here from the McCready Harness Shop in Independence, Iowa. He was one of 2 blacksmiths on 3rd Ave. NE. Gone are the days of the ringing sound of steel clanging upon steel as the "smithy" shaped the horse shoe with showers of colored sparks.

Large Tie Rods
The outside walls of the Mill feature rectangular bearing plates. Attached to these plates are long iron rods, spanning the distance between the two walls. Turnbuckles, located 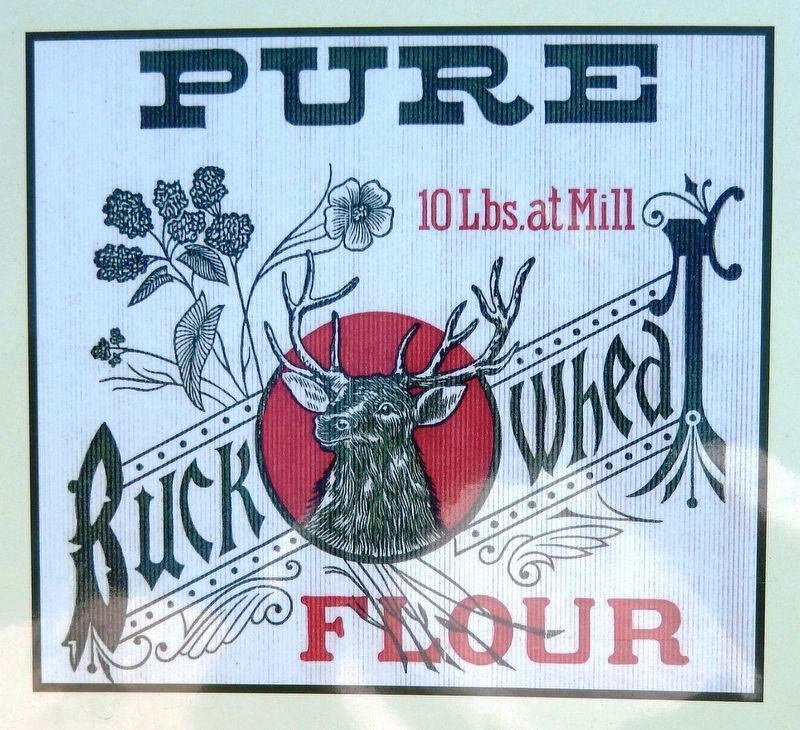 3. Marker detail: Wapsipinicon Mill Buckwheat Flour
in the center of the rods, maintain tension in the rods, helping keep the mill square and strong.

Iron Stars
Cast iron star brick ties, probably made locally by Frank Megow of the "Star Foundry" in Independence, are utilized as wall ties or brick anchors. The brick tie holds cladding to wood sheathing, across an air space. A clinching-head spike was used as a supplemental tie for holding brick to wood.

Brick Pavers
The sidewalk and front patio of the mill illustrates the type of streets used in early Independence. The City laid its first brick paver in the 1880's. Now many of the pavers have been saved and are utilized here as a display.

Prairie Flowers
Iowa was once a land covered by vast prairies. While thick woodlands bordered the many rivers and streams and covered much of northeast Iowa, prairies still dominated the landscape. Prairie grasses and flowers covered approximately 85 percent of Iowa.

Mesic Prairies were the most common prairie type to cover Iowa. They are not too wet and not too dry, they lie somewhere in between. Mesic prairies have lighter soils than wet prairies and are found on both loamy and sandy soils. Rainwater soaks in more on mesic prairies than it does on dry prairies but does not collect water from surrounding areas like a wet prairie does.

Our small Prairie Flower Garden is a project 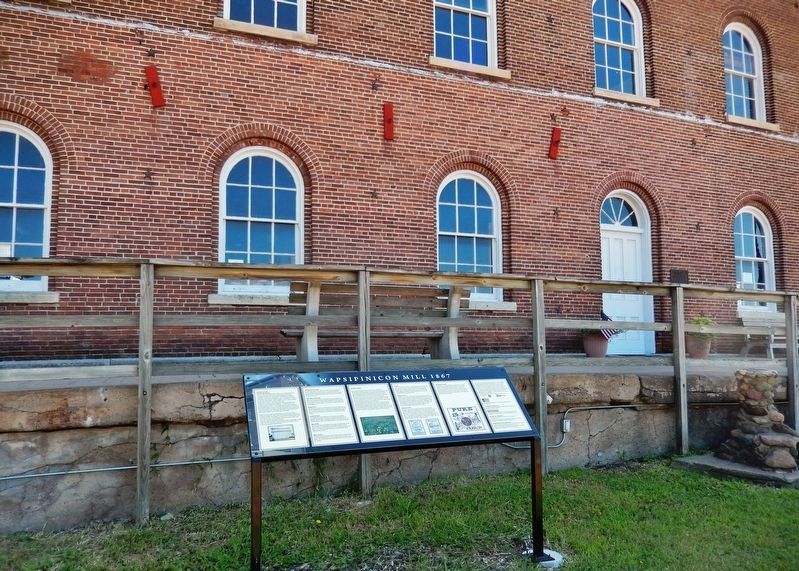 Flour
Used in many foods, Flour is made from grains or other starchy food sources. It is most commonly made from wheat, but also maize (corn), rye, barley, and rice. Flour is the key ingredient of bread, which is the staple food in many countries, and therefore the availability of adequate supplies of flour has often been a major economic and political issue.

Wheat Flour
Usually the word 'flour' used alone refers to wheat flour, which is one of the most important foods in European and American culture and it usually is enriched. Wheat flour is the main ingredient in most types of breads and pastries. It consists principally of wheat flour together with fine particles of wheat bran, wheat germ, and the offal from the 'tail of the mill' in earlier times. The 'tail of the mill' is nothing more than the sweepings of leftovers after everything has been processed from that week.

Graham Flour
Graham flour is a form of white wheat flour. It is named for Sylvester Graham who developed this form 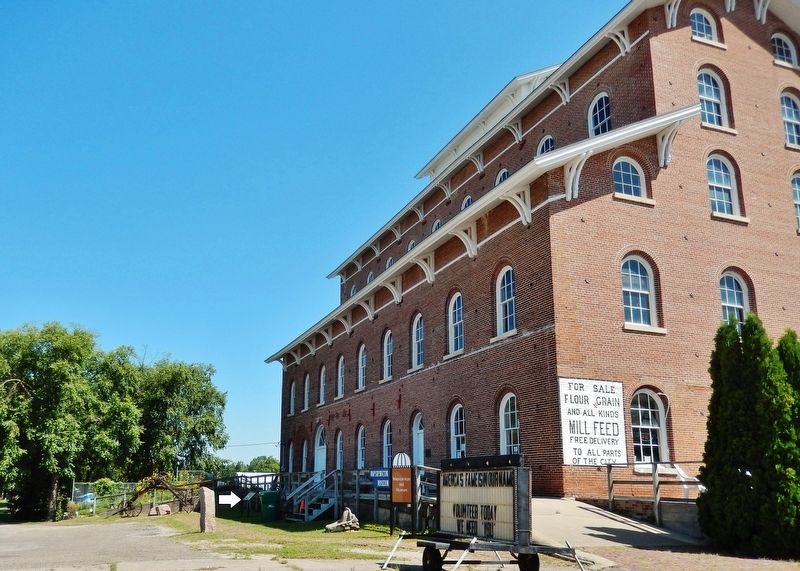 By Cosmos Mariner, August 8, 2017
5. Wapsipinicon Mill (southwest elevation)
(marker visible in background, within building shadow)
of flour in the 1830's. To make graham flour, the endosperm of winter wheat is finely ground. The bran and germ layers are returned and mixed in, resulting in a coarse, brown flour with a nutty and slightly sweet flavor. Although the terms graham flour and whole wheat flour are often used interchangeably, there is a difference. Graham flour is a slightly coarser grind than whole wheat flour.

Buckwheat Flower
Buckwheat has many characteristics of grains, but is actually a rhubarb with a high-quality protein balance. It has an earthy, slightly sour flavor that is usually tempered in commercial products by the addition of a little wheat flour. WWII caused a flour shortage in the county. A ton of buckwheat was shipped from South Dakota and the buhr stones were started again for processing buckwheat flour for a local café. It was the last time the buhr stones were used. 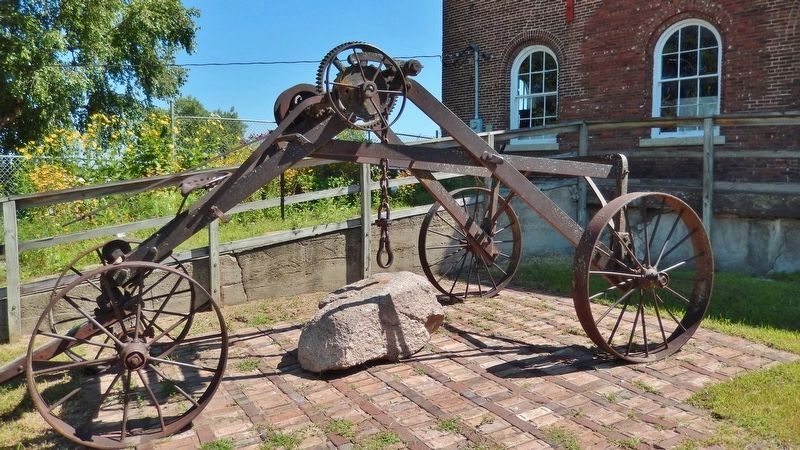 Location. 42° 28.142′ N, 91° 53.723′ W. Marker is in Independence, Iowa, in Buchanan County. Marker is on 2nd Avenue Northwest just north of 1st Street West (County Highway D22), on the right when traveling north. Marker is located on the west side of Wapsipinicon Mill. Touch for map. Marker is at or near this postal address: 100 1st Street West, Independence IA 50644, United States of America. Touch for directions.

Also see . . .
1. Wapsipinicon Mill (Wikipedia). The first mill built on this site was completed in 1854. It was replaced by the present structure in 1867. Part of its foundation is the original mill. It continued to operate as a mill until 1976, when the Buchanan County Historical Society acquired it and they operate it as a museum. (Submitted on December 9, 2020, by Cosmos Mariner of Cape Canaveral, Florida.)

2. Wapsipinicon Mill. Bread in all 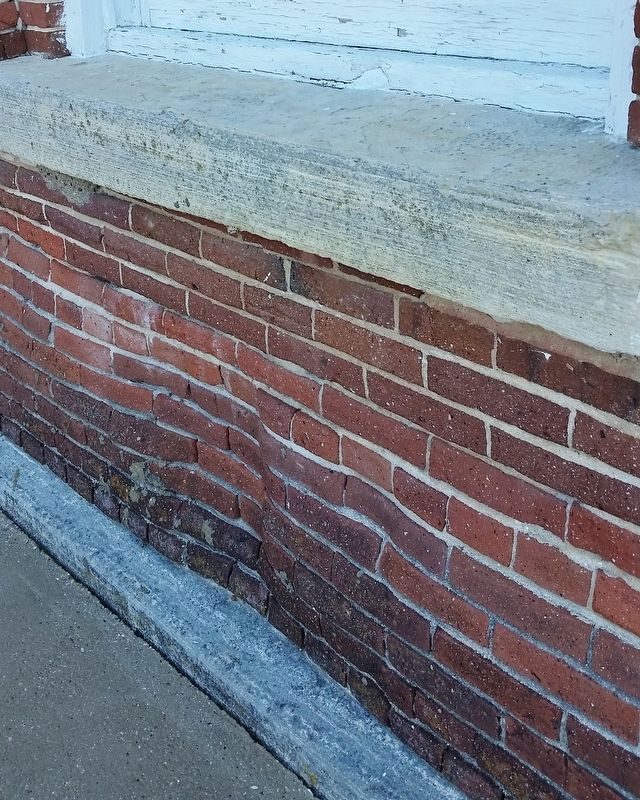 By Cosmos Mariner, August 8, 2017
7. Wapsipinicon Mill - West Wall Grooves
times and in most cultures is considered the staff of life. Therefore, grinding the settlers’ wheat into flour and other grains into various mill products for a fast-growing population was of the utmost importance. The Wapsipinicon Mill served in this capacity for over 100 years. As wheat production slowed down, it became more economical to produce “Wapsi” brand poultry and stock feed. (Submitted on December 9, 2020, by Cosmos Mariner of Cape Canaveral, Florida.) 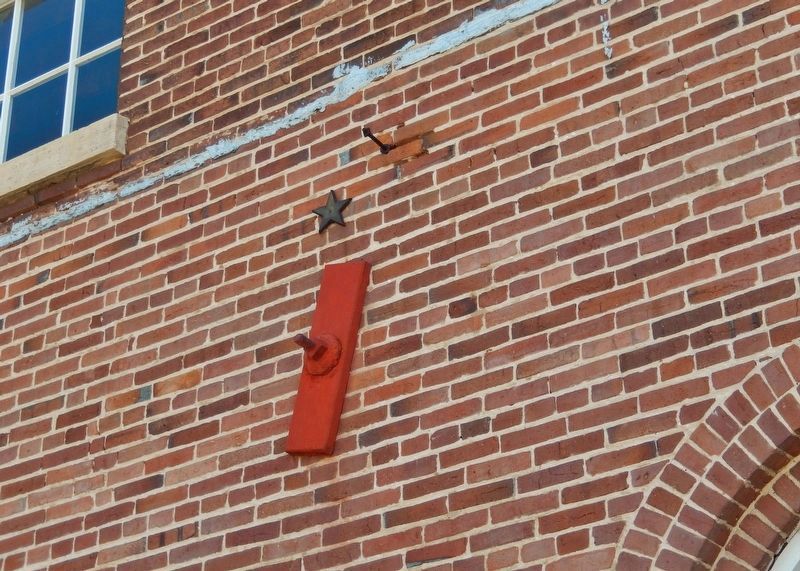 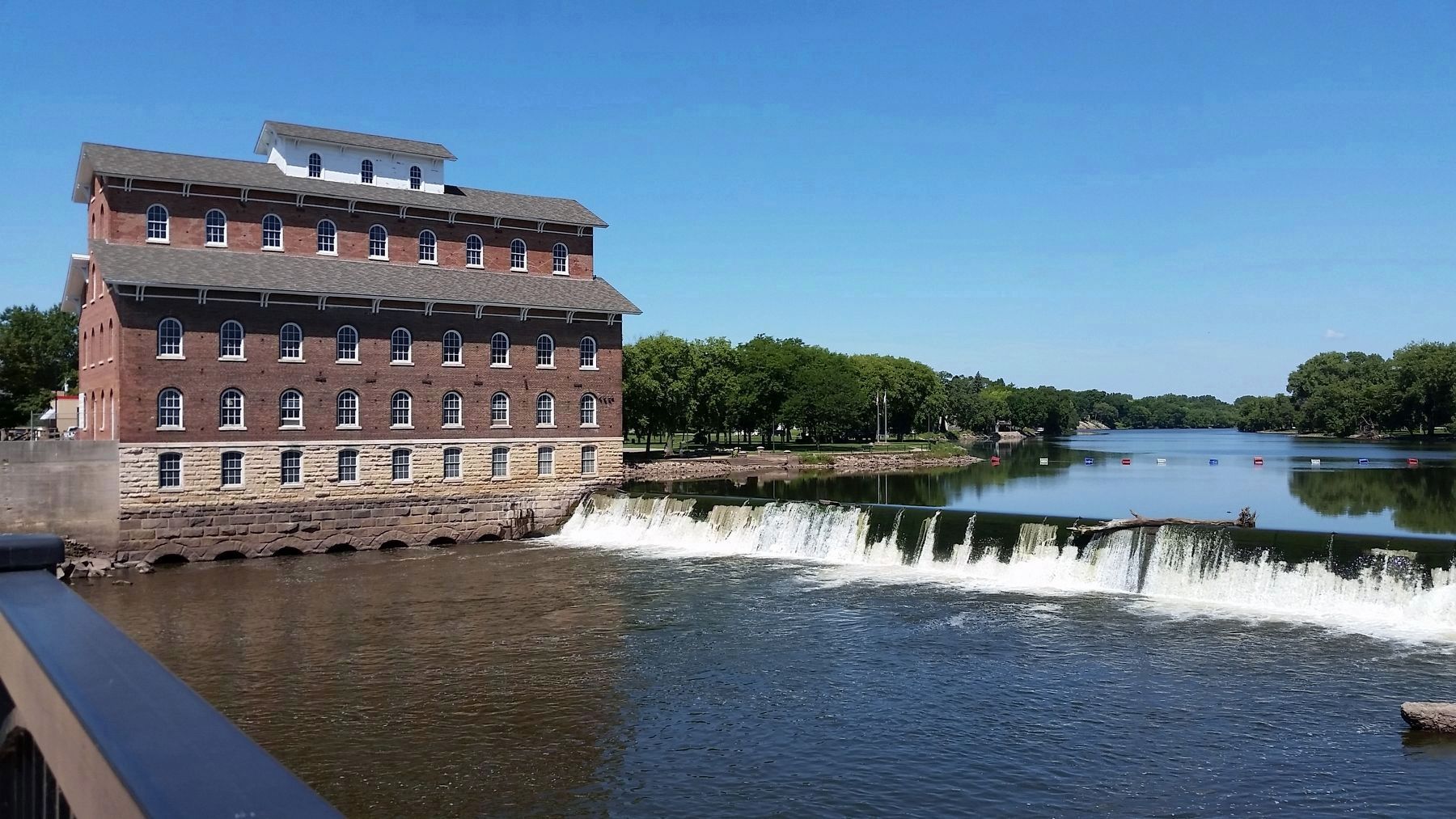