Life with the Railroad 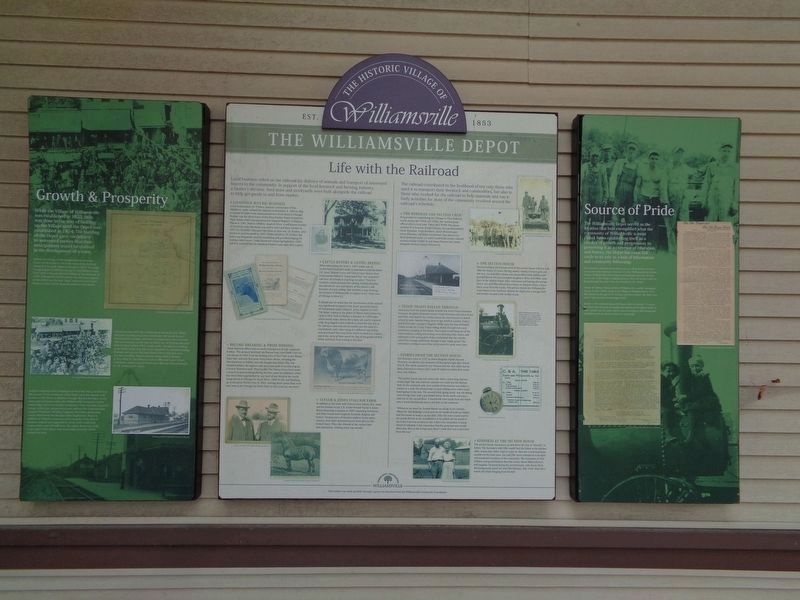 Local business relied on the railroad for delivery of animals and transport of interested buyers to the community. In support of the local livestock and farming industry, a farmer's elevator, feed store and stockyards were built alongside the railroad to help get goods to and from market.

Local businessman J.F. Prather, importer and breeder of fine Shorthorn cattle, utilized the railroad on December 4, 1904 to ship a carload of cattle to the International Live Stock Show in Chicago. Prather was the third owner of the Price-Prather House located on Main Street, which was placed on the National Register of Historic Places in 1991. Built in 1868 by James R. Price, a well-known breeder of Hereford cattle, the home was sold to John and Mary Prather in 1877 for $20,000. They gave the home to their son, J.F. Prather, who lived in it until his death in 1927. While owned by J.F. Prather, the home was frequently used for socializing and provided lodging for visiting cattle buyers. Teddy Roosevelt visited Springfield in 1903, and it is rumored that 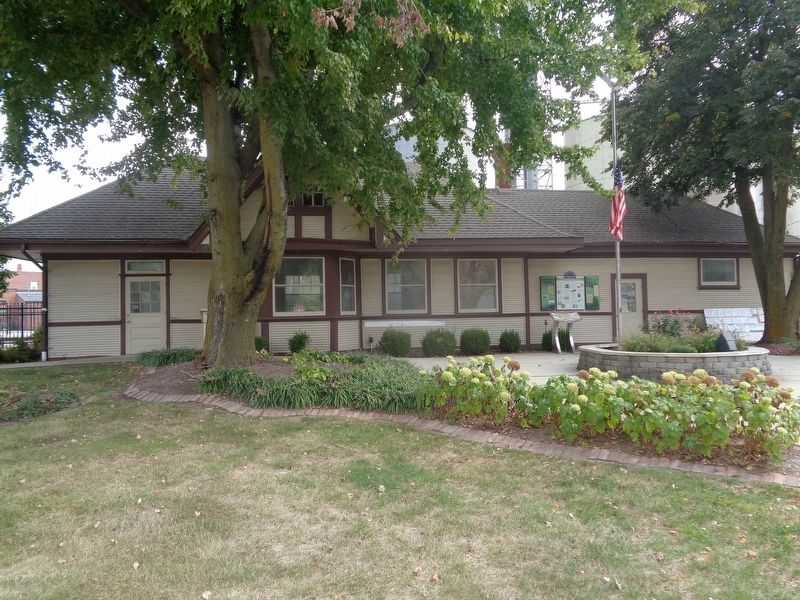 By Jason Voigt, September 27, 2020
2. The Williamsville Depot Marker
Marker is mounted on the building
he stayed at Prather's one night after a party.

When advertising the June 4, 1907 public sale of Scotch-bred Shorthorn cattle in association with his father J.R. Jones' Walnut Grove and Cherry Grove farms, local businessman Milton E. Jones noted that "our customers will have no trouble in reaching our place." This fact would be certain because the catalog, besides detailing the animals for sale and history of the industry and business of cattle raising, also includes a map showing the location of Williamsville in respect to the "Main Line of Chicago & Alton R'y."

It should also be noted that the introduction of the railroad was significant in regard to the Jones' particular breed of Cruickshank cattle. Milton E. Jones explains in 1907, "My father coming to the plains of Illinois had to drive his cattle to New York to Market, a distance of 1,000 miles, which seems today almost like a fairy tale, and it required a big, long legged coarse bullock to stand the trip, but as the railways came into use he readily saw the need of a Cruickshank cattle, they being of a different type and at once purchased this cross from which we bred our winners and in the niche of time saved the flag of the grand old Red, White and Roan from trailing in the dust."

These business affairs had no small consequence as was explained further. "The present herd bull, the famous Imp. Lard Banff 150718 was shown in 1901 from the leading fairs of New York to the Illinois State Fair, and won first prize everywhere shown, including the Pan-American at Buffalo, and was bought that fall for fifty-one hundred dollars, the highest cash price ever paid in auction ring for a Scotch Shorthorn bull." Prior to this "the Cherry Grove Herd made a record on prize bullocks during the four years on exhibition which has never been approached by any herd of any breed in the world, being shown at Chicago Fat Stock Show, 1890-91-92, and finishing up at the great World's Fair of 1893, winning more prizes than were ever won at the Chicago Fat Stock Show in four years by any herd."

In addition to his work with Cherry Grove Farms, M.E. Jones and his brother-in-law C.R. Taylor formed Taylor & Jones Horse Importing Company in 1900, importing Percheron and Shire horses from England, Scotland, Belgium and France. Owning some of the best stallions in the entire country, their sales attracted buyers from all over the United States. They also showed at the various fairs and expositions, winning many top awards.

The railroad contributed to the livelihood of not only those who used it to transport their livestock and commodities, but also to those who worked for the railroad to help maintain and run it. Daily activities for most of the community revolved around the railroad's schedule.

• The Foreman and Section Crew

Section foreman Joe Parsons lived in the section house with his wife Ollie for nearly 25 years. Having raised a family of seven girls and one boy, Joe and Ollie's home was always filled with children and grandchildren. The two youngest daughters, Bette and Millie, were born in the section house. After retirement and leaving the section house, Joe and Ollie moved into a home on Harpole Street, a mere block away from the tracks. This picture details the Williamsville Train Depot in the forefront. Behind the Depot sits as storage shed and further beyond is the section house.

Memories from the section house include one from Evelyn Dennison Freeman, daughter of section worker Virgil Dennison and niece to Joe and Ollie, who lived in the section house for several years to attend school in town. Besides being close in age and first cousins, Evelyn and the Parsons' youngest daughter Millie were the best of friends. Evelyn recalls the Troop Trains rolling slowly through town and sometimes stopping at the Depot. The troops would hang out of the train windows, yelling and waving; even throwing their names and addresses to the young girls. Evelyn exclaimed that she and the rest of her teenage girlfriends thought it was "really great!" She remembers writing to one of the servicemen for quite some time.

• Stories from the Section House

Jim Thornton, born in 1937 to eldest daughter Mallie Parsons Thornton, recalls his own memories of the period right after World War II. The watch carried by Joe Parsons and the time table that he likely followed are shown here, both of which are referred to in the story that follows.

"The section house was one room wide, three rooms long and two stories high. The only entrance anyone ever used was the kitchen door on the southeast side. Just outside of the kitchen was either a cistern or a well. The kitchen had a wood cooking stove and a small hand pump by the sink. The second room, going north, was the dining room/living room with a pot-bellied stove. At the north end was a stairway to the second floor. A boardwalk went south from the house past a wood shed/smoke house and then to the outhouse."

"Whenever we went for Sunday dinner we all ate in the kitchen. When the Ann Rutledge would pass by we would all hold our dishes and silverware to keep it on the table. After the train would roar by we would all look at my Grandfather as he pulled out his watch to see if the train was on-time or not. I don't ever remember it being ahead of schedule. I also remember that the grownup men would often play dice on the living room floor! I think that was a carryover from the war."

• Kindness at the Section House

The section house was known up and down the line as "friendly" to hobos. The foreman's wife Ollie would feed the hobos at the kitchen table, unless they didn't want to come in, then she would feed them outside on the front lawn. Joe and Ollie were considered to be kind and wonderful members of the community. The memories of their children and grandchildren describe a busy home filled with love and laughter. Pictured facing the section house, with Route 66 in the background, stand Joe and Ollie Parsons, July 1943. Note Joe's watch and chain hanging from his belt.

Named the Chicago & Mississippi Railroad when the Depot was first built in 1854, the name of the Railroad changed to St. Louis, Alton & Chicago in 1857. The name changed again in 1862 to Chicago & Alton Railroad until 1947 when it became the Gulf, Mobile & Ohio Railroad. In 1949, Williamsville bid farewell to the old steam engines, as the GM&O was the first "large" railroad in the United States to replace all its steam locomotives with diesels.

Taken from the south side of Main Street during the late 1800s, this photo includes local town and country folk astride horses, manning their carriages and some accompanied by their livestock. The two structures on the right sit where the old Williamsville State Bank location, built in 1903, resides today. The tall brick building in the center of the shot still stands alongside the old bank building. Business and services that lined Main Street at this time were (l-r) the Post Office, Reisch's Butcher Shop, Miller's Harness & Shoe Shop, Dr. McClelland's medical office and Taylor & Sons, a hardware, cutlery and provisions store that was later purchased by J.B. Jones and J.P. Turley.

Several businesses once existed just north of the Depot, as shown in this picture. To the northwest of the Depot, off in the distance and located on Elm Street, is Robison's Garage. Beyond the Depot, in the same general location where the Williamsville Community Center exists today, were several other businesses. These included Claypool's Garage, where gas and groceries were sold and the Greyhound bus stopped, Shepherd's Welding Company, Meredith's Barbershop, Glenn's Blacksmith and Baugher Farm Implements. These, in addition to Wilson's restaurant, were examples of the kind of businesses utilized and supported by locals when small-town communities were self-sufficient. This photo shows Joy's Café to the right of the Depot, with automobiles from the 1940s parked out front.

The Williamsville Depot served as the location that best exemplified what the community of Williamsville is most proud. From establishing itself as a conduit of growth and progression, to preserving it as a conveyor of education and history, the Depot has come full circle in its role as a hub of information and community fellowship.

The memories attached to the Depot and its role in history are best conveyed in this editorial, written in 1915 by Williamsville local Nate Hussey. Williamsville station agent and telegraph operator, he was son of one of the Village's original pioneers. Note the article refers to living through the years since the 90s; that is, the 1890s.

George M. Adams, former editor to Williamsville's weekly newspaper during the late 1800s, wrote to the Village of Williamsville in 1972. Still spirited at the age of 90, George reminisced about "the little town where I got my start in newspaper work."

Hussey's 1915 editorial about the Depot refers to George. "It was at the depot that our local newspaperman gathered his biggest batch of news. Adams was his name and he was everything in that newspaper establishment from devil, to editor, to ownership."

Location. 39° 57.239′ N, 89° 32.976′ W. Marker is in Williamsville, Illinois, in Sangamon County. Marker is on South Elm Street south of West Main Street (County Route 2), on the right when traveling north. Touch for map. Marker is at or near this postal address: 102 S Elm St, Williamsville IL 62693, United States of America. Touch for directions.