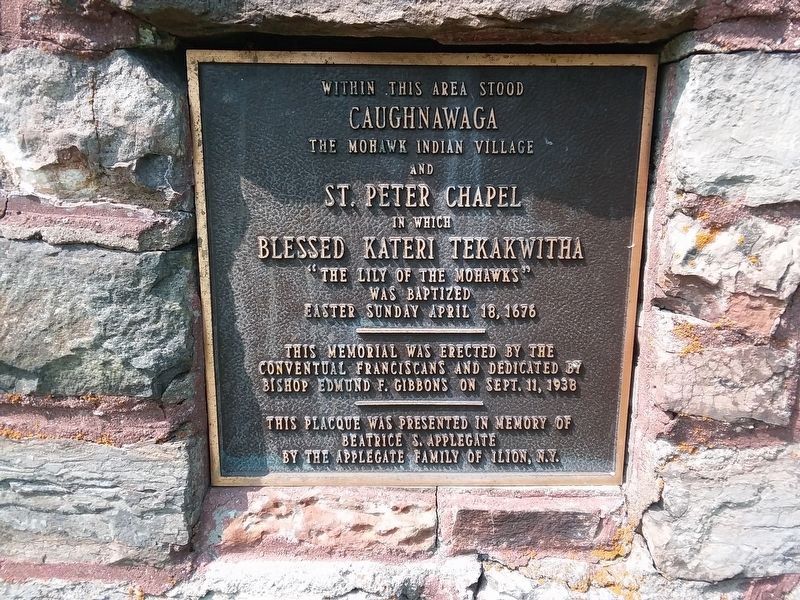 This memorial was erected by the Conventual Franciscans and dedicated by Bishop Edmund F. Gibbons on Sept. 11, 1938

Within this area stood
Caughnawaga
the Mohawk Indian village
and
St. Peter Chapel
in which
Blessed Kateri Tekakwitha
"The Lily of The Mohawks"
was baptized
Easter Sunday April 18, 1678


This memorial was erected by the
Conventual Franciscans and dedicated by
Bishop Edmund F. Gibbons on Sept. 11, 1938


This plaque was presented in memory of
Beatrice S. Applegate
by The Applegate Family of Ilion, N.Y.

Erected 1938 by The Applegate Family.

Topics. This historical marker is listed in these topic lists: Churches & Religion • Native Americans • Settlements & Settlers • Women. A significant historical date for this entry is April 18, 1678.

Other nearby markers. At least 8 other markers are within walking distance of this marker. Caughnawaga Castle Site (a few steps from this marker); 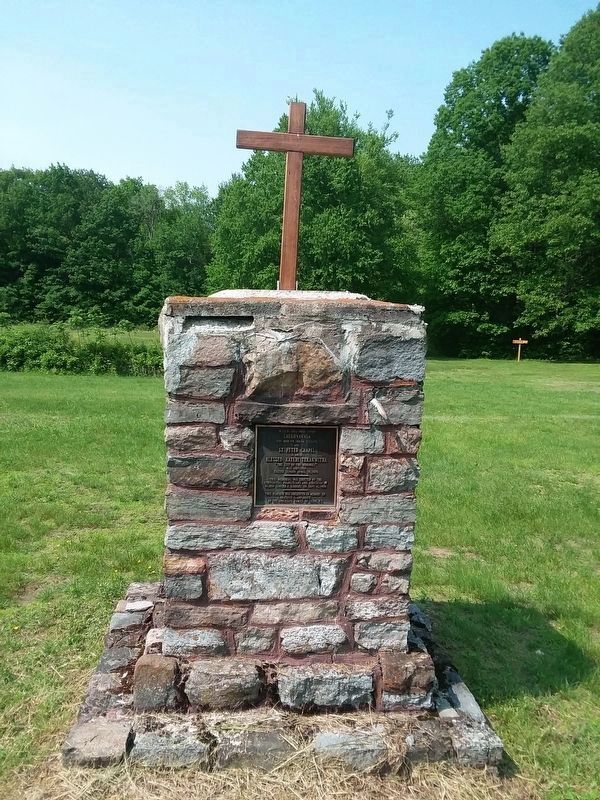 Born in the Mohawk village of Ossernenon, on the south side of the Mohawk River in present-day New York State, she contracted smallpox in an epidemic; her family died and her face was scarred. She converted to Catholicism at age nineteen, when she was baptized and given the Christian name Kateri in honor of Catherine of Siena. Refusing to marry, she left her village and moved for the remaining five years of her life to the Jesuit mission village of Kahnawake, south of Montreal on the St. Lawrence River in New France, now Canada.

Kateri Tekakwitha took a vow of perpetual virginity. Upon her death at the age of 24, witnesses said that her scars vanished minutes later, and her face 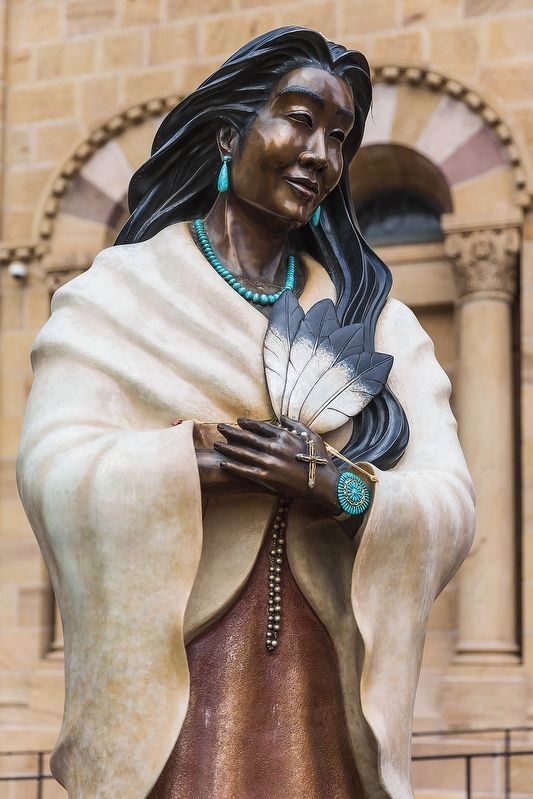 By Dieter Kaupp via Wikimedia Commons (CC ) 4.0, July 5, 2013
3. Statue of Saint Kateri Tekakwitha
Cathedral Basilica of St. Francis of Assisi, Santa Fe, NM
appeared radiant and beautiful. Known for her virtue of chastity and mortification of the flesh, as well as being shunned by some of her tribe for her religious conversion to Catholicism, she is the fourth Native American to be venerated in the Catholic Church and the first to be canonized, in 2012. 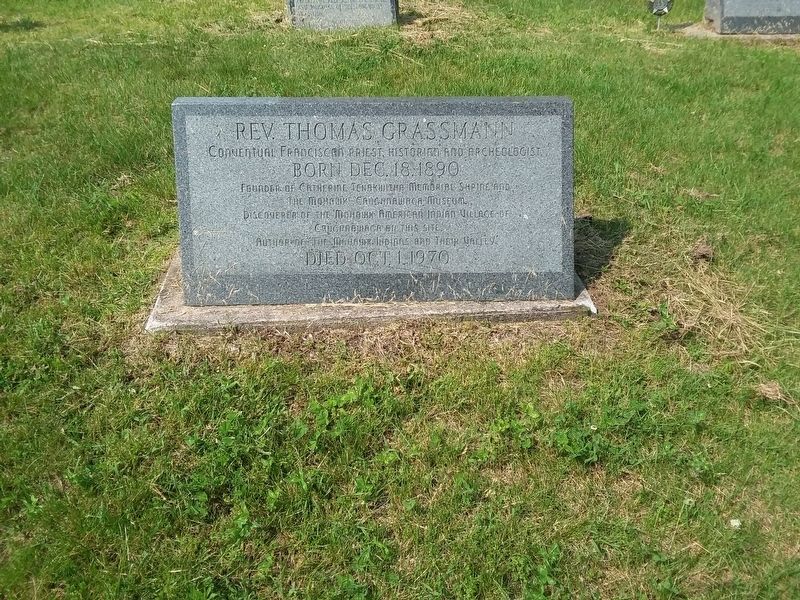 Photographed By TeamOHE, June 1, 2019
4. Rev. Thomas Grassmann
“Conventual Franciscan priest, historian and archeologist. Born Dec. 18. 1890. Founder of Catherine Tekakwitha Memorial Shrine and the Mohawk-Caughawaga Museum. Discoverer of the Mohawk American Indian Village of Caughnawaga on this site. Author of The Mohawk Indians and Their Valley.” This marker placed near the shrine. 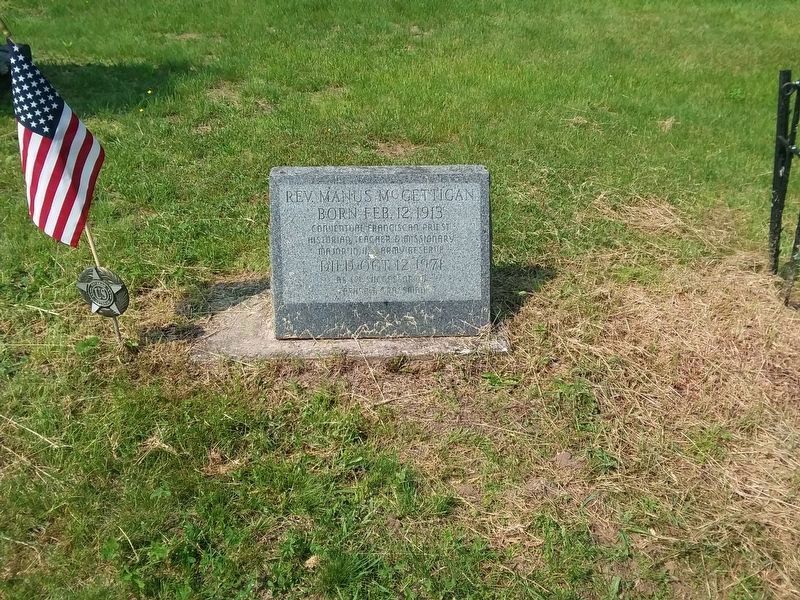 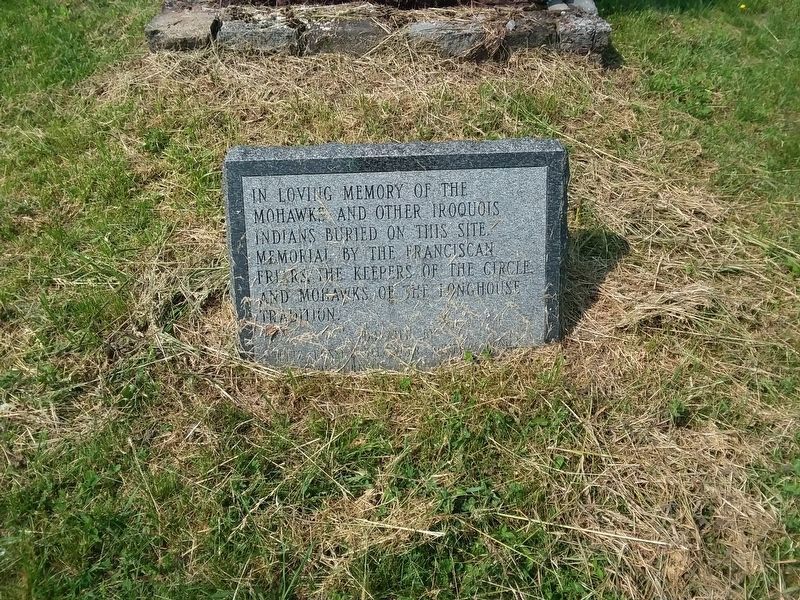 Photographed By TeamOHE, June 1, 2019
6. In Loving Memory
“In loving memory of the Mohawks and other Iroquois Indians buried on this site. Memorial by the Franciscan Friars, the Keepers of the Circle, and Mohawks of the longhouse tradition.” 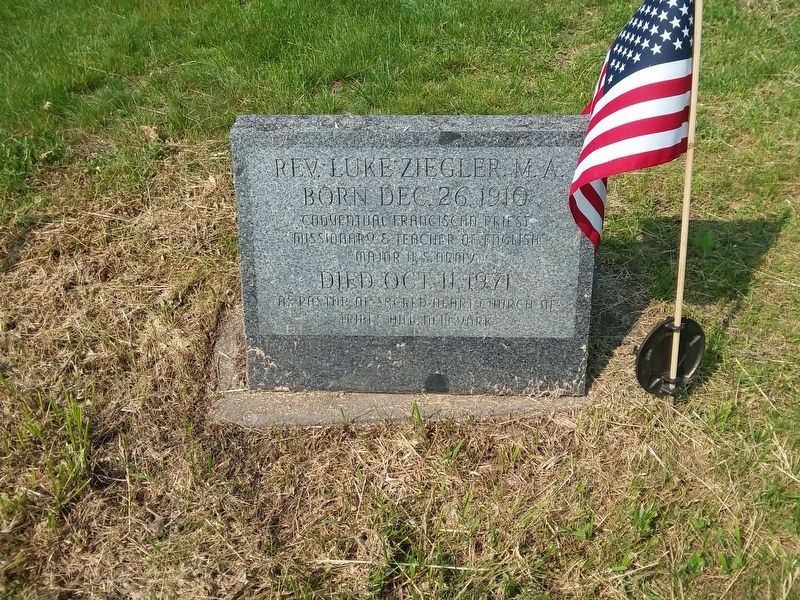