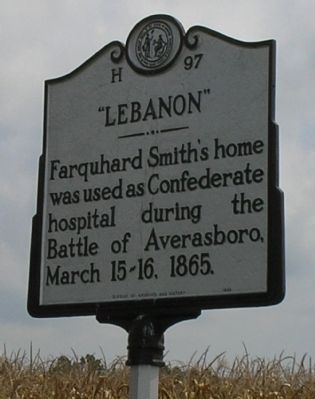 By Bill Coughlin, August 18, 2006
1. Lebanon Marker
Inscription.
"Lebanon". . Farquhard Smith's home was used as Confederate hospital during the Battle of Averasboro, March 15-16, 1865. . This historical marker was erected in 1961 by Division of Archive and History. It is Near Dunn in Harnett County North Carolina

Farquhard Smith's home was used as Confederate hospital during the Battle of Averasboro, March 15-16, 1865.

Erected 1961 by Division of Archive and History. (Marker Number H-97.)

Topics and series. This historical marker is listed in this topic list: War, US Civil. In addition, it is included in the North Carolina Division of Archives and History series list. A significant historical month for this entry is March 1800. 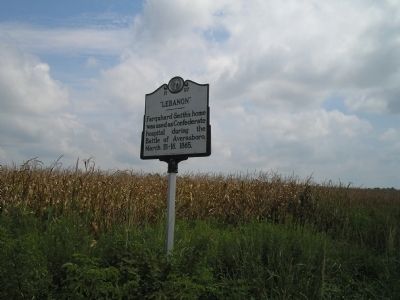 Regarding "Lebanon". On March 15th the left wing of General Sherman’s Union army, commanded by General H. W. Slocum, was advancing along the road from Fayetteville to Averasboro. General H. J. Kilpatrick’s cavalry division was in the lead, skirmishing with General Joseph Wheeler’s Confederate cavalry which contested the Union advance.

At 3:00 P.M. the Union forces struck a heavy Confederate skirmish line. General Smith Atkins’ 9th Michigan cavalry drove the skirmishers back into the first of three lines of breastworks erected across the road. The Union cavalry then constructed heavy barricades in front of the Confederate works. Nearly three hours after the initial Union attack began, Confederate General W. B. Taliaferro, whose division was holding position, ordered an attack along his line. The Union forces, though hard-pressed, were able to hold their position due to the arrival of reinforcements from the 14th Corps. Nightfall found the two armies in nearly the same positions they had held throughout the afternoon. General W. T. Sherman Union commander, arrived on the field during the 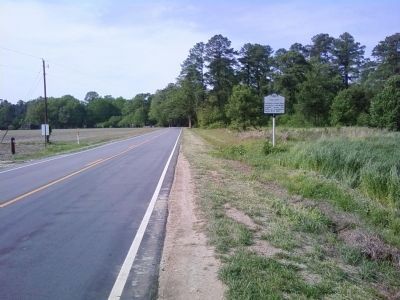 At 6:00 A.M. on March 16th, the Union forces attacked Taliaferro’s line, driving the Confederates before them. Then the Southerners launched a desperate counter-attack. A disaster for the Union forces was averted when portions of the 20th Corps arrived upon the field. Three batteries of artillery were placed in the position near the John Smith house. They began firing upon the Confederates, driving them back into their breastworks.

Union General H. J. Kilpatrick’s cavalry found a back road and circled to the rear of the Confederate position. The Union cavalry attempted to use the road to flank the Confederates, but was stopped by Colonel G. P. Harrison’s brigade of McLaws’ division after moving only a short distance.

General Taliaferro decided to abandon the Confederate second position after finding his men in danger of being flanked. At 1:00 P.M. he withdrew to the third and final line of earthworks, where he was assisted by McLaws' division on his left and Wheeler’s dismounted cavalry on his right. Rhett’s disorganized brigade was held in general reserve behind the junction of this road and 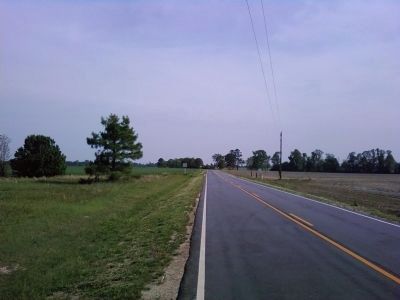 The Union forces soon advanced and established a strong line immediately in front of the Confederate third line. From the new position they pressed the Confederates all afternoon and part of the evening, but were unable to break the line. At 8:00 P.M. General W. J. Hardee, commanding the Confederate forces at Averasboro, having accomplished his objectives, began withdrawing his corps along the Smithfield road. Wheeler’s cavalry was left behind to cover the retreat. By 4:00 A.M. on March 17th, all Confederate units had been withdrawn, leaving the Union forces in control. Nearly 700 Union soldiers and approximately 500 Confederates had been killed or wounded. Local farms including “Oak Grove and “Lebanon,” as well as several other smaller dwellings were utilized by both armies as field hospitals.

General Hardee wished to accomplish two things by contesting the Union advance at Averasboro. The first objective was to determine for General Joseph E. Johnston, commander of all Confederate forces in the Carolinas, whether Sherman’s army was advancing on Raleigh or Goldsboro. The Confederates learned it was moving on Goldsboro. The second objective was to stretch out the distance between Sherman’s left and right wings (which were moving on parallel roads) in order to give General Johnston a chance to concentrate his smaller army and destroy the 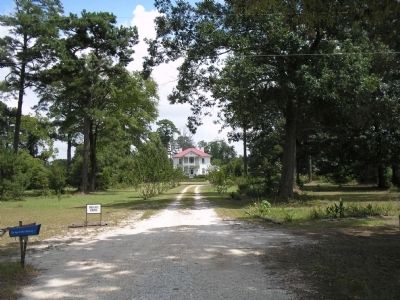 By Bill Coughlin, August 18, 2006
5. Lebanon
This house, built in 1825, was the first Harnett County property named to the National Register of Historic Places. The photo was taken from the road, just north of the marker.
Union left wing before the right wing could come to its assistance. Both of these objectives were fully accomplished. The stage was now set for the greater Battle of Bentonville fought 25 miles east on March 19-21, 1865. 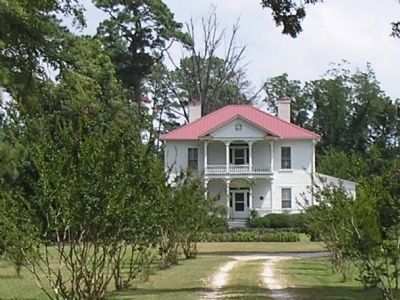 By Bill Coughlin, August 18, 2006
6. Lebanon
During the Battle of Averasboro on March 15-16, 1865, the Union army under Gen. William T. Sherman pursued Confederates under Gen. William J. Hardee past this plantation house. Lebanon was also used as a hospital during and after the battle. 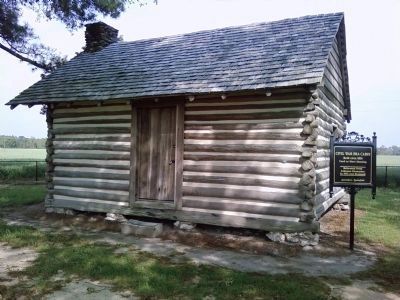