1953: A Century Old and Still Progressing 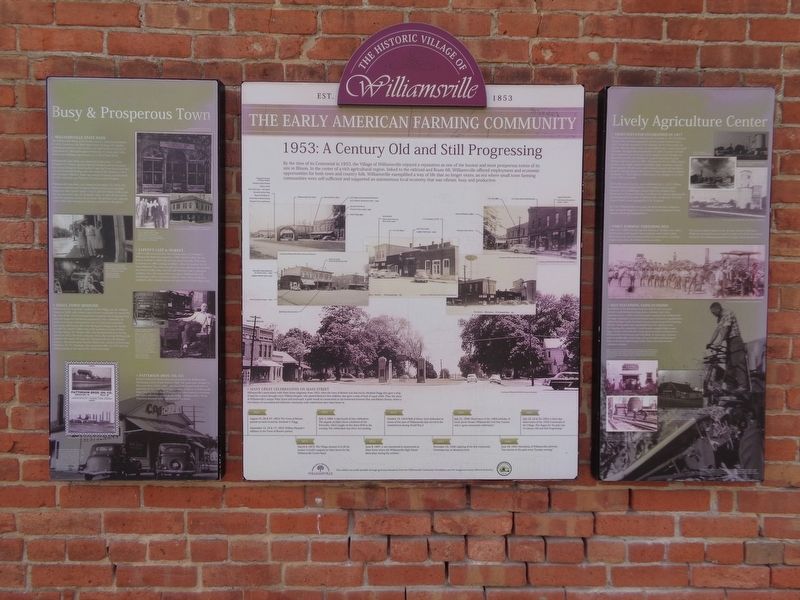 By the time of its Centennial in 1953, the Village of Williamsville enjoyed a reputation as one of the busiest and most prosperous towns of its size in Illinois. In the center of a rich agricultural region, linked to the railroad and Route 66, Williamsville offered employment and economic opportunities for both town and country folk. Williamsville exemplified a way of life that no longer exists; an era where small town farming communities were self-sufficient and supported an autonomous local economy that was vibrant, busy and productive.

Many Great Celebrations on Main Street

Williamsville's particularly wide Main Street originates from 1853, when the town of Benton was laid out by Abraham Flagg who gave a strip of land for a street through town. William Harpole, who plotted Benton's first addition, also gave a strip of land of equal width. Thus, the story of Williamsville's unique Main Street and boulevard. A park would be constructed on the boulevard between Pine and Elkhart Streets, where a rich history of successful elaborate community-wide celebrations have been home to. 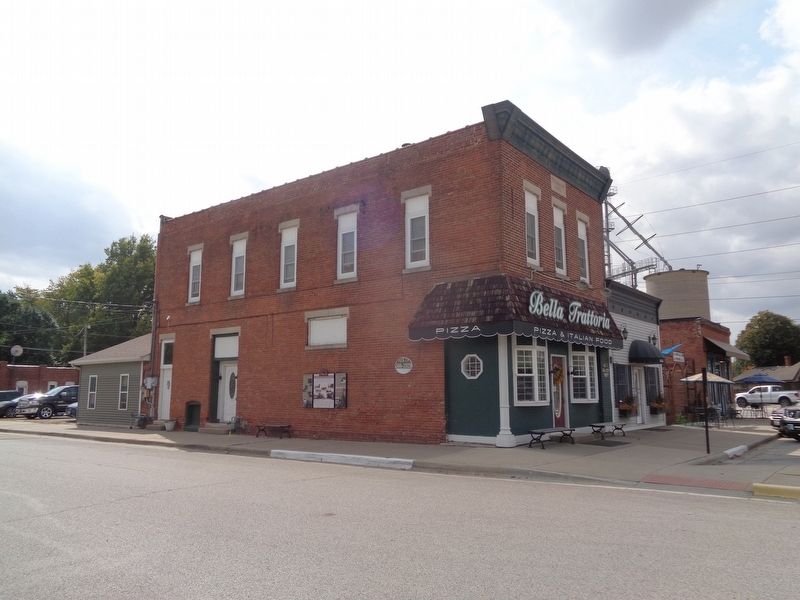 March 9, 1872: The Village donates $14.36 for lumber to build a pagoda on Main Street for the Williamsville Cornet Band.

July 4, 1884: A big Fourth of July celebration. The pagoda on Main Street contained all the fireworks, which caught on fire about 8:00 in the evening. The celebration was short, but exciting.

June 8, 1897: A new bandstand is constructed on Main Street where the Williamsville High School Band plays during the summer.

October 15, 1919: Roll of Honor Arch dedication in honor of the men of Williamsville that served in the armed forces during World War I.

June 26, 1942: Merchants of Williamsville advertise "free movies at the park every Tuesday evening."

The Williamsville Bank of J.F. Prather and Co. opened for business in 1890, located at 106 West Main Street. To house the rapidly expanding business, a new location was built on the north side of Main Street in 1903 and remained there for 77 years until 1980, when a new building was erected at 512 West Main Street.

Williamsville State Bank was chartered on December 1, 1920. President J.F. Prather and his bank are credited with saving many area farms during the Stock Market Crash and Great Depression due to sound financial banking. After the death of Mr. Prather in 1927, Vice President Milton E. Jones was named President until his death in 1952, when his son Thornton P. Jones became President.

Williamsville State Bank was robbed on December 14, 1953. The gunman required bank President Thornton Jones to tie up bank employees Jim Conrad, Gladys Council, and Ann Shaver with a rope. Having run out of rope, he demanded Jones to take of his necktie, which the gunman used to tie up Jones. The gunman was captured a short time aftr leaving the bank in a roadblock at Broadwell.

Laffey's Café was located in the building where J.F. Prather's Williamsville Bank first opened in 1890. Patrick Laffey, Sr. was born in Ireland in 1869 and married Anna Connelly. They came to America in 1880, settling in Elkhart, where he worked for the Alton Railroad. They were the parents of ten children, one of which was Patrick Laffey who, with his wife Florence, had a restaurant in Elkhart for a few years before moving to Williamsville and establishing Laffey's Café from 1930 to 1945. They would later establish Laffey's Market across the street at 119 West Main Street.

The first doctor to practice medicine in the Village was Dr. William Conrey in 1855, after whom Conrey Street would later be named. By the time of the 1953 Centennial there would be two long practicing and well-respected physicians supported by the community. Dr. Stuttle served the community for over 50 years and continued practicing well into his 80s, after having first hung up his shingle in 1900. Dr. Stuttle's office was at the southwest corner of Main and Elm Streets. Dr. Shearl's office was located downtown, having opened in 1915. He died in January 1954, after serving Williamsville residents for nearly 40 years. Dr. Garrison took over Dr. Shearl's practice. Two doors away from Dr. Shearl was a Doctor of Veterinary Medicine, Dr. C.C. Hastings, who opened his office in 1913 and was still practicing at the time of the 1953 Centennial.

The first grain elevator in Williamsville was built in 1877 by Wesley Council, who had been engaged in the local grain business since 1857. It had two elevators in the building: one for corn on the ear and the other for wheat, oats, rye and shelled corn. Council also dealt in lumber and agricultural implements. In 1881, Council's elevator was considered one of the best of its capacity on the Chicago and Alton Railroad. His son, William H. Council, inherited the grain business upon his death in 1897. Destroyed by fire in 1900, a larger elevator was rebuilt; capable of handling larger quantities of grain and equipped with the most modern improvements and machinery. Council's elevator became the Farmer's Cooperative Grain Company on March 15, 1921. Clarence Wilcockson was manager at the time of the 1953 Centennial.

By 1955, Williamsville's two grain elevators and feed companies were among the largest in central Illinois, processing much of the annual yield of surrounding farms.

Taken circa 1900, this photograph displays a "thresher run" where local farmers work together harvesting the wheat fields. Likely steam powered, the threshing machine is connected to a portable engine with a belt, all of which can be seen here.

The grain would be hauled to the elevator and the chaff baled. While the men and boys were hard at work in the field, the women and girls were making preparations for large "thrashing dinners."

In addition to the downtown business district and two grain elevators with feed processing plants, a lumber yard, farm implement store, welder and blacksmith supported the Williamsville farming community. Local hired hands and contractors supplied their additional labor needs. Livestock was an integral part of the farming lifestyle. Stockyards were maintained near the railroad tracks for shipping the commodity. Local farmers supplied milk, cream, eggs, chicken, beef and other home-grown produce and goods to Williamsville's businesses and townsfolk alike rented space for perishables and butchered meat at the local cold storage locker, before freezers became common in homes.