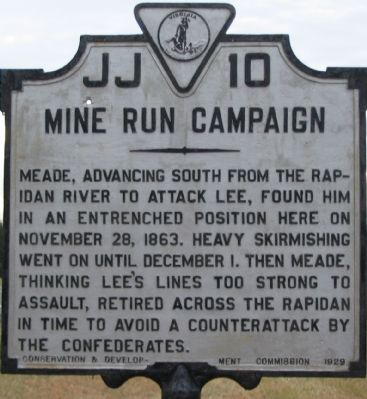 Photographed By Craig Swain, January 5, 2008
1. Mine Run Campaign Marker
Inscription.
Mine Run Campaign. . Meade, advancing south from the Rapidan River to attack Lee, found him in an entrenched position here on November 28, 1863. Heavy skirmishing went on until December 1. Then Meade, thinking Lee's lines too strong to assault, retired across the Rapidan in time to avoid a counterattack by the Confederates. . This historical marker was erected in 1929 by Conservation and Development Commission. It is Near Locust Grove in Orange County Virginia

Meade, advancing south from the Rapidan River to attack Lee, found him in an entrenched position here on November 28, 1863. Heavy skirmishing went on until December 1. Then Meade, thinking Lee's lines too strong to assault, retired across the Rapidan in time to avoid a counterattack by the Confederates.

Topics and series. This historical marker is listed in this topic list: War, US Civil. In addition, it is included in the Virginia Department of Historic Resources series list. A significant historical month for this entry is November 1863.

Location. This marker has been replaced by another marker nearby. It was located near 38° 17.811′ N, 77° 50.797′ W. Marker was near Locust Grove, Virginia, in Orange County. Marker was at the intersection of Constitution Highway (State Highway 20), on the right when traveling west on Constitution Highway. Touch for map. Marker was in this post office area: Locust Grove VA 22508, United States of America. Touch for directions.

Other nearby markers. At least 8 other markers are within 3 miles of this location, measured as the crow flies. Face Off (approx. 2 miles away); a different marker 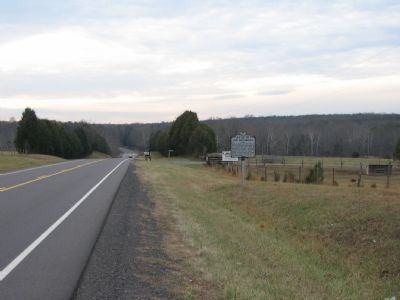 Photographed By Craig Swain, January 5, 2008
2. Mine Run Campaign Marker
Mine Run passes under the highway in the valley beyond the marker. 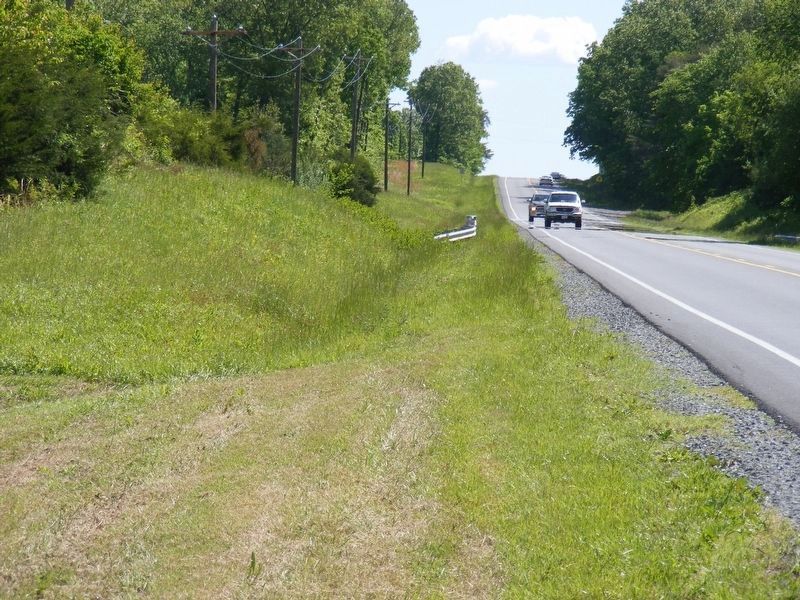 Photographed By Pete Payette, May 8, 2017
3. Mine Run Campaign Marker 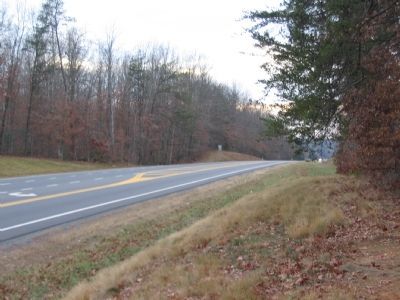 Photographed By Craig Swain
4. Federal Lines
Here, to the west of the Robinson's Tavern site and to the east of the marker location, Federal forces in General Sedgwick's VI Corps entrenched as they faced the Confederate lines about two miles further west beyond Mine Run. The armies engaged here were the same as those which fought at Gettysburg, earlier in the year. Consider that Pickett's famous charge in that battle traversed a mile over open fields. Here at Mine Run a proposed Federal attack would cover double that distance over broken ground. All this a very good reason why Mine Run was a battle that never really got started. 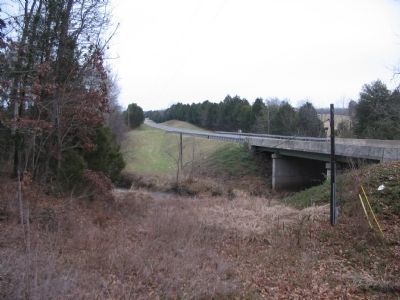 Photographed By Craig Swain, January 5, 2008
5. Mine Run
Here were the Orange Turnpike (modern VA 20) crosses Mine Run, the advanced Confederate defenses were positioned to contest any Federal attack. Even if the two miles of broken ground is overcome, the Federals still had to ford the stream. Thus adding another consideration for the commanders in blue. 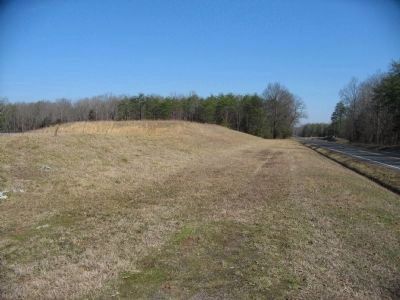 Photographed By Craig Swain, January 5, 2008
6. Confederate Lines
Here along Virginia Highway 20 (looking east back at the Mine Run Bridge), at the high ground west of Mine Run, the Confederates built several fortified artillery positions to cover the valley of Mine Run. The berm here is not natural or part of the fortifications, but rather a modern excavation of a pumping station.

CR 692 closely follows the trace of the Confederate line of defenses on the west side of Mine Run. While several traces of earthworks exist along the woods and fields, these remain on private property. 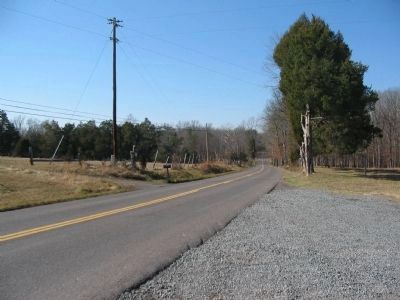