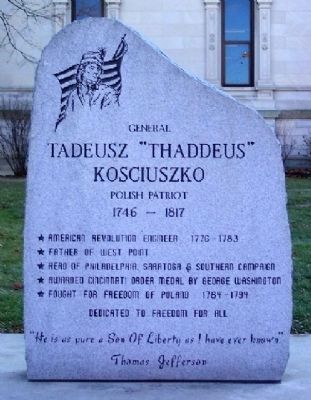 Photographed By William Fischer, Jr., December 30, 2008
1. General Tadeusz "Thaddeus" Kosciuszko Monument
Inscription.
General Tadeusz "Thaddeus" Kosciuszko. Polish Patriot. , . American Revolution Engineer 1776 - 1783 , . Father of West Point , . Head of Philadelphia, Saratoga and Southern Campaign , . Awarded Cincinnati Order Medal by George Washington , . Fought for freedom of Poland 1784 - 1794, Dedicated to Freedom for All, “He is as pure a Son Of Liberty as I have ever known” Thomas Jefferson . This historical marker is in Warsaw in Kosciusko County Indiana

Dedicated to Freedom for All

Topics and series. This historical marker is listed in these topic lists: Patriots & Patriotism • War, US Revolutionary • Wars, US Indian. In addition, it is included in the Former U.S. Presidents: #03 Thomas Jefferson series list. A significant historical year for this entry is 1776.

Location. 41° 14.337′ N, 85° 51.437′ W. Marker is in Warsaw, Indiana, in Kosciusko County. Marker is on Main Street, on the right when traveling east. Marker is on the north courthouse grounds. Touch for map. Marker is in this post office area: Warsaw IN 46580, United States of America. Touch for directions. 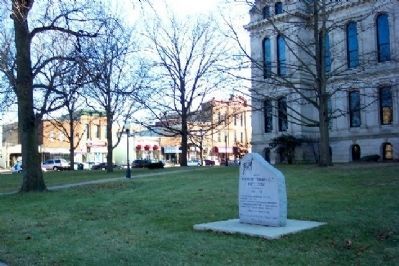 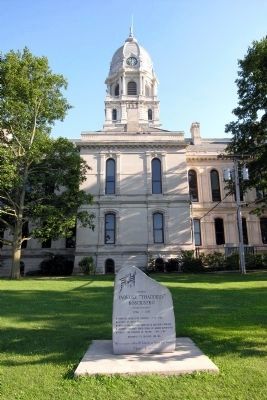