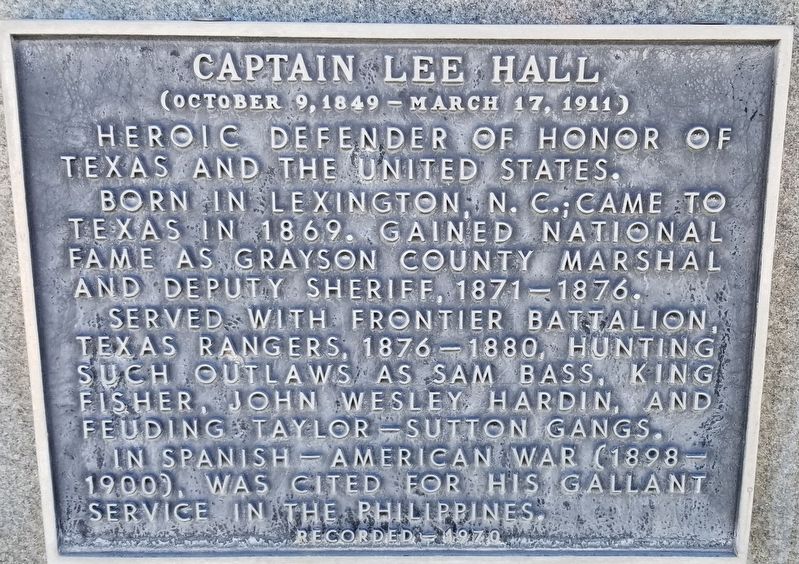 Location. Marker has been reported damaged. 29° 25.294′ N, 98° 28.003′ W. Marker is in San Antonio, Texas, in Bexar County. Marker can be reached from Paso Hondo 0.1 miles west of North Palmetto Street. The marker is located in the first circle driveway in the San Antonio National Cemetery. Touch for map. Marker is at or near this postal address: 517 Paso Hondo, San Antonio TX 78202, United States of America. Touch for directions.

Also see . . .
1. Texas Rangers. In 1823, only two years after Anglo-American colonization formally began in Texas, Empresario Stephen F. Austin hired ten experienced frontiersmen as "Rangers" for a punitive expedition against a band of Indians. But not until November 24, 1835, did Texas lawmakers institute a specific force known as the Texas Rangers. Source: The Handbook of Texas (Submitted on December 26, 2020, by James Hulse of Medina, Texas.)

2. Jesse Leigh Hall (1849–1911). Artist Frederic Remington characterized him as "a gentleman of the romantic Southern soldier type, and he entertained the highest ideals, with which it would be extremely unsafe to trifle." Source: The Handbook of Texas (Submitted on December 26, 2020, by James Hulse of Medina, Texas.)