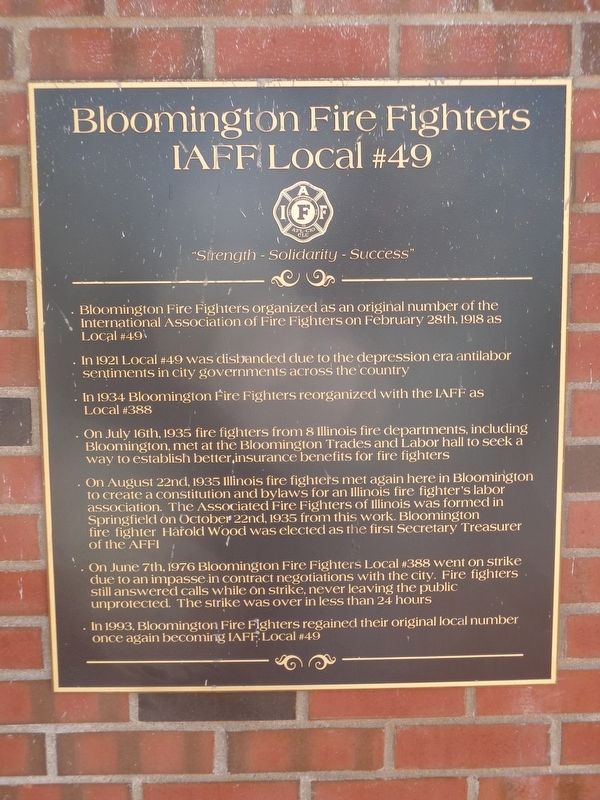 • On July 16th, 1935 fire fighters from 8 Illinois fire departments, including Bloomington, met at the Bloomington Trades and Labor hall to seek a way to establish better insurance benefits for fire fighters

• On June 7th, 1976 Bloomington Fire Fighters Local #388 went on strike due to an impasse in contract negotiations with the city. Fire fighters still answered calls while on strike, never leaving the 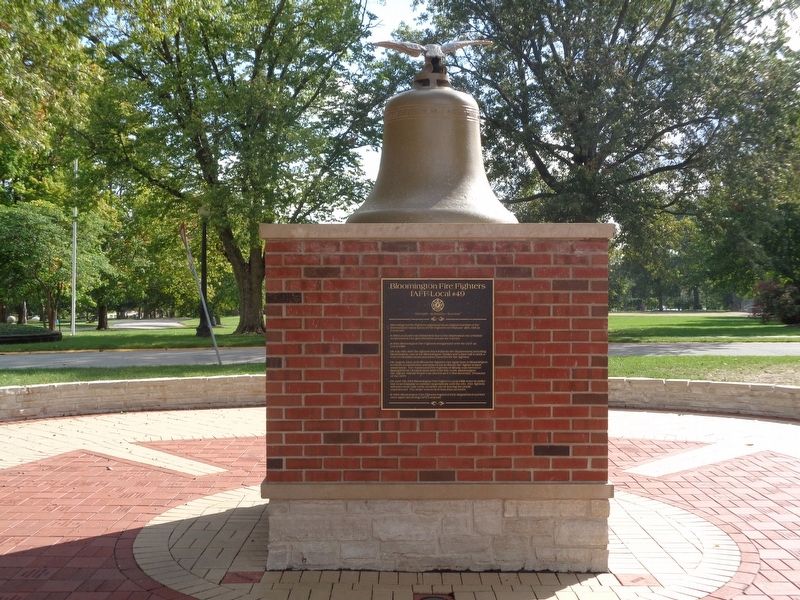 By Jason Voigt, September 28, 2020
2. Bloomington Fire Fighters IAFF Local #49 Marker
Marker is located at Miller Park
public unprotected. The strike was over in less than 24 hours

Location. 40° 28.257′ N, 89° 0.111′ W. Marker is in Bloomington, Illinois, in McLean County. Marker can be reached from South Morris Street. Marker is located in the northeastern portion of Miller Park (near the War Memorial). Touch for map. Marker is at or near this postal address: 1020 S Morris Street, Bloomington IL 61701, United States of America. Touch for directions.

Other nearby markers. At least 8 other markers are within walking distance of this marker. Bloomington Fire Department (here, next to this marker); Rhodes Mill Stones (within shouting distance of this marker); Train Whistle Monument (about 400 feet away, measured in a direct line); Dome (approx. ¼ mile away); Miller Park's Segregated Beaches (approx. 0.3 miles away); John M. Scott (approx. 0.6 miles away); Plane Crash Memorial (approx. 0.6 miles away); Angeline Strode Turner Lamon (approx. 0.6 miles away). Touch for a list and map of all markers in Bloomington.
Credits. This page was last revised on December 26, 2020. It was originally submitted on December 26, 2020, by Jason Voigt of Glen Carbon, Illinois. This page has been viewed 36 times since then and 3 times this year. Photos:   1, 2. submitted on December 26, 2020, by Jason Voigt of Glen Carbon, Illinois.
Share This Page.