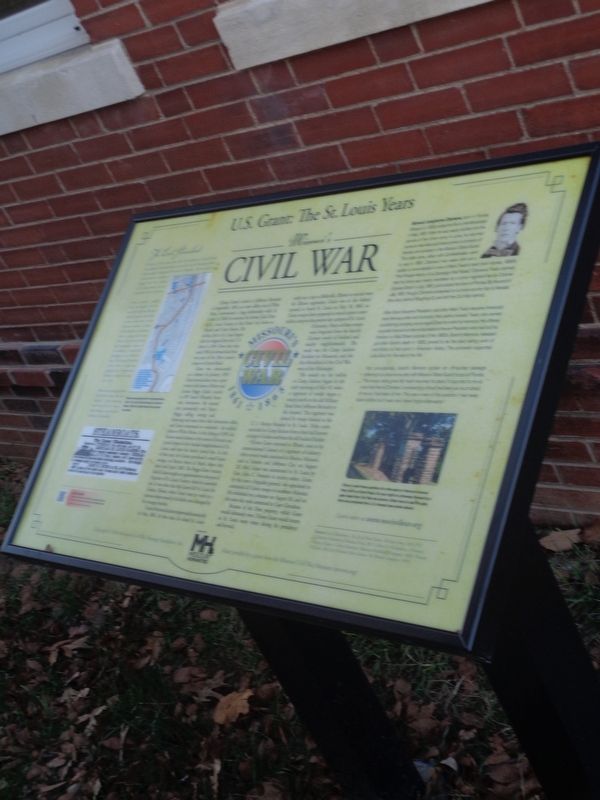 Ulysses Grant's arrival at Jefferson Barracks in September, 1843, as a new officer out of West Point, commenced a long relationship with St. Louis. In 1848, he married the former Julia Dent of St. Louis County, at the Dents' city home at Fourth and Cerre Streets. His civilian life in St. Louis began after he resigned from the U.S. Army in 1854. From that time until 1858, he farmed land that was part of the Dent country estate on Gravois Road.

Grant was unsuccessful as a farmer. In January, 1859, Grant moved alone into a spare room in the home of Harry and Louisa Boggs (Julia's cousin) at 209 South Fifteenth Street near downtown. He entered into partnership with Harry Boggs, selling, renting and financing real estate from their downtown office, and Grant commuted on weekends - he walked home to White Haven. In the Spring of 1859, the Grants rented a home at the corner of Seventh and Lynch Streets in the Soulard neighborhood of St. Louis, and there his family joined him. In July of that year, the Grants purchased a small frame cottage, on Barton Street at Ninth, where they lived until April, 1860. The Boggs-Grant venture failed. Grant 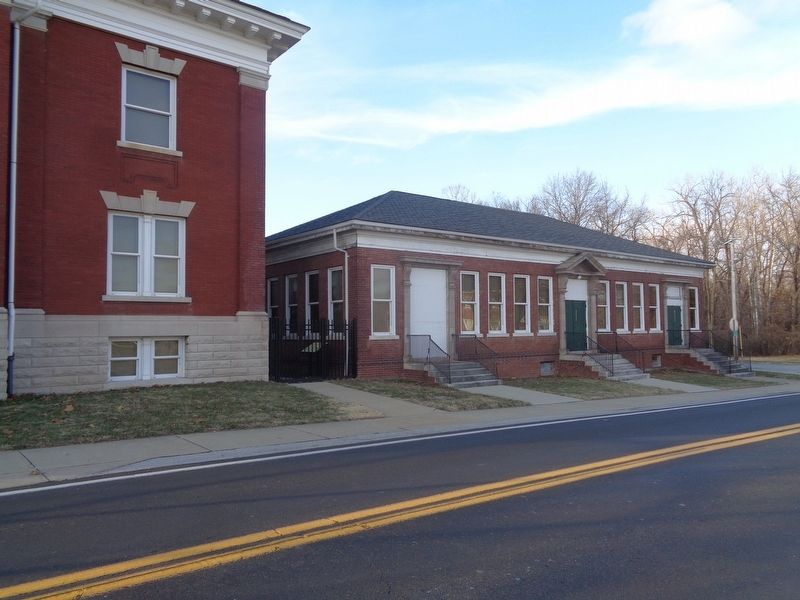 Photographed By Jason Voigt, December 28, 2020
2. U.S. Grant: The St. Louis Years Marker
Marker is between the buildings behind a fence

Click or scan to see
this page online
sought an appointment to the post of Engineer of St. Louis County, which he narrowly lost. It was then that the Grants left St. Louis for Galena, Illinois, where Grant went to work in a harness shop owned by his father and managed by his younger brother.

Grant's fortunes had not improved dramatically by May, 1861. At that time, he visited St. Louis while on a trip to Belleville, Illinois to recruit men for Illinois regiments. Grant was at the federal arsenal in South St. Louis on May 10, 1861, as Union troops there prepared to march upon a state militia camp on the present-day campus of St. Louis University. Many of these troops were irregulars from the heavily German wards of Soulard and nearby neighborhoods. The result was the Camp Jackson Incident (or Massacre), and the first bloodshed of the Civil War west of the Mississippi.

The assault on the militia at Camp Jackson began in the early morning of May 10, when a regiment of troops began a march north on the old Military Road from Jefferson Barracks to the Arsenal. This regiment was joined by troops housed at the U.S. Marine Hospital in St. Louis. Other units marched on Camp Jackson from a beer hall known as Jaeger's garden and from the old Soulard Market.

Ulysses Grant returned to Illinois, soon to be commissioned Colonel of a regiment of infantry. After several weeks stationed in Mexico, Missouri, and at Ironton and Jefferson City, on August 28, 1861, Grant was summoned to St. Louis by Gen. John C. Fremont to receive orders. Grant, by this time a brigadier general, was appointed to command all Union troops in southeast Missouri. He embarked on a steamer on August 30, and on the same day took command at Cape Girardeau.

Because of the Dent property, which Grant would ultimately own, Ulysses Grant would return to St. Louis many times during his presidency and beyond.

On May 21, 1861, eleven days after the incident at Camp Jackson, the steamboat Nebraska made its way north on the Mississippi River. It had evaded a blockade of the river at Memphis. This was the last civilian vessel to complete a voyage from New Orleans to St. Louis before the war closed the river to commerce.

Union gunners, probably from the heights at the far end of the Jefferson Barracks Parade Ground, trained their cannon on the river. As the Nebraska steamed in front of the Barracks, the gunners fired a cannon shell across its bow. The vessel's pilot did not immediately heave to for boarding. A second shell, exploded on the Nebraska's deck. This broght the boat to bay. After its cargo was inspected, the Nebraska was allowed to finish its voyage to St. Louis.

There was a passenger present in the pilot house that day, himself a pilot returning north from his last trip to New Orleans. It was Samuel Clemens of Hannibal.

Samuel Langhorne Clemens, born in Florida, Missouri, in 1835, ended his life on the Mississippi in May, 1861. After he was nearly drafted into the service of the Union army in June, he returned home to Hannibal and there joined a company of friends who enlisted in the Missouri State Guard. This state army, allied with Confederates, went to war in 1861. Clemens' two week stint as a soldier is immortalized in one of Mark Twain's best short stories, 1896's "The Private History of a Campaign that Failed." Clemens/Twain claimed that his force was nearly overtaken by a Union regiment led by Colonel Ulysses Grant, in July, 1861, just outside the town of Florida. By the end of July, 1861, though, Clemens embarked on a cross-country trip to Nevada (the story behind Roughing It, and left the Civil War behind.

After Grant became President, and after Mark Twain became America's most famous writer and humorist, their paths crossed. Twain, who owned a publishing company, encouraged Grant to write his memoirs. He offered to publish the work on terms favorable to the ex-President, who had lost his fortune in a Wall Street scandal of the 1880s. Grant's Memoirs, release just after Grant's death in 1885, proved to be the best selling work of non-fiction to that point in American history. The proceeds supported Julia Grant for the rest of her life.

Not coincidentally, Grant's Memoirs contain an oft-quoted passage referring to a close encounter with Missouri State Guard troops at Florida: "The troops were gone. My heart resumed its place. It occurred to me at once that Harris [Clemens' commanding officer] had been as much afraid of me as I had been of him. This was a view of the question I had never taken before; but it was one I never forgot afterwards."

Topics and series. This historical marker is listed in these topic lists: Arts, Letters, Music • War, US Civil • Waterways & Vessels. In addition, it is included in the Former U.S. Presidents: #18 Ulysses S. Grant, and the Missouri’s Civil War series lists.

Location. 38° 30.376′ N, 90° 17.03′ W. Marker is in Lemay, Missouri, in St. Louis County. Marker is on Worth Road south of Hancock Avenue, on the left when traveling north. Marker is on the grounds of Missouri Civil War Museum, which is part of Jefferson Barracks Park. Touch for map. Marker is at or near this postal address: 222 Worth Rd, Saint Louis MO 63125, United States of America. Touch for directions.

Editor’s want-list for this marker. a clear, horizontal photo of the marker • Can you help?
Share this page.