Laura's Dugout Home on the Banks of Plum Creek 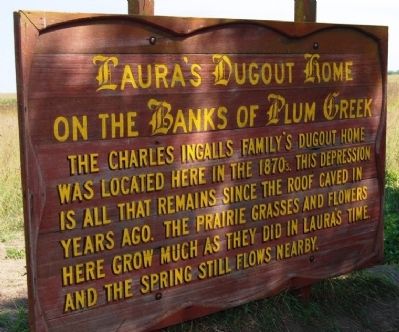 The Charles Ingalls Family's dugout home was located here in the 1870's. This depression is all that remains since the roof caved in years ago. The prairie grasses and flowers here grow much as they did in Laura's time, and the spring still flows nearby.

Topics. This historical marker is listed in this topic list: Landmarks.

Location. 44° 14.943′ N, 95° 27.81′ W. Marker is in Walnut Grove, Minnesota, in Redwood County. Marker can be reached from County Road 5 1½ miles north of U.S. 14, on the right when traveling north. Located on farmland owned by the Gordon family. Fee required. Touch for map. Marker is in this post office area: Walnut Grove MN 56180, United States of America. Touch for directions.

Regarding Laura's Dugout Home on the Banks of Plum Creek. In 1947 Harold and Della Gordon purchased a 172 acre farm in Walnut Grove, MN, unaware of its historical connection. Garth Williams, an illustrator 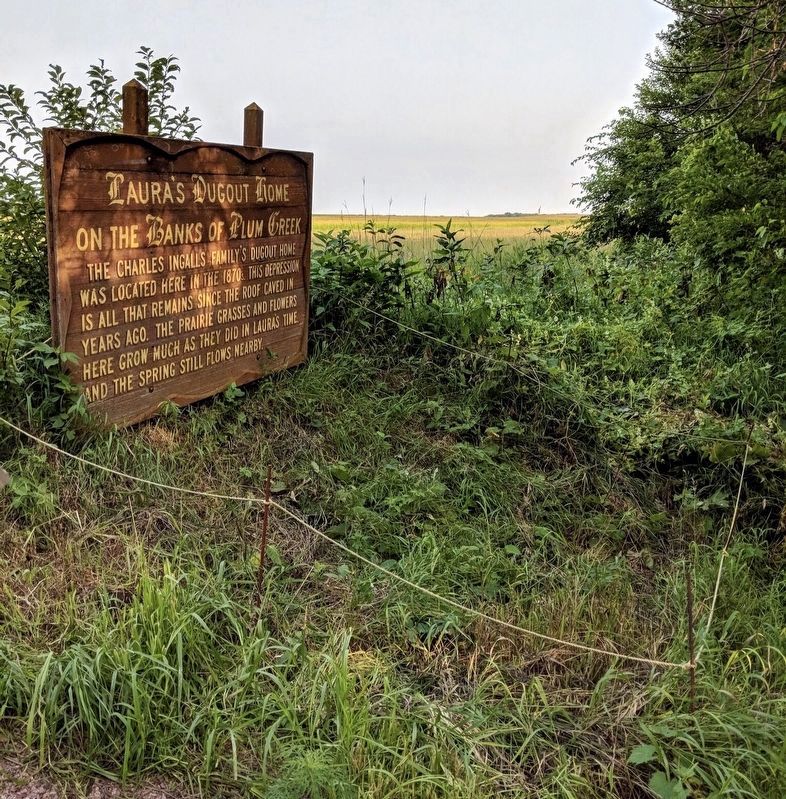 Click or scan to see
this page online
of Laura Ingalls Wilder's books, had been following the Ingalls' trail in courthouse records. He visited the Gordons in November 1947 and informed them that their new farm had been homesteaded by the Ingalls. The unusual depression in the bank of Plum Creek was the location of the Ingalls dugout.

The Gordon family continues to maintain access to the dugout site for Laura's fans. Visitors can still identify the plum thickets, table lands, big rock, spring, and other sites that Laura describes in "On the Banks of Plum Creek". The Gordons have left the dugout site as they found it in 1947. The deep depression is all that remains of Laura's dugout home. None of the buildings that Pa built remain nor is their exact location known. About 25 acres of native grasses have been planted surrounding the dugout site since 1999 to enhance the visitor's experience.

The site is open during daylight hours May through October, weather permitting. Occasionally, heavy rains cause Plum Creek to flood access to the site. Entrance to the site is through the current 1900 era farmstead located 1.5 miles north of Walnut Grove on Redwood County Highway 5. The Gordons charge visitors $5.00 per car or $30.00 per tour bus which is deposited at the site on the honor system. Follow the signs to a large parking and picnic area along Plum Creek and enjoy the sights and sounds from Laura's time.