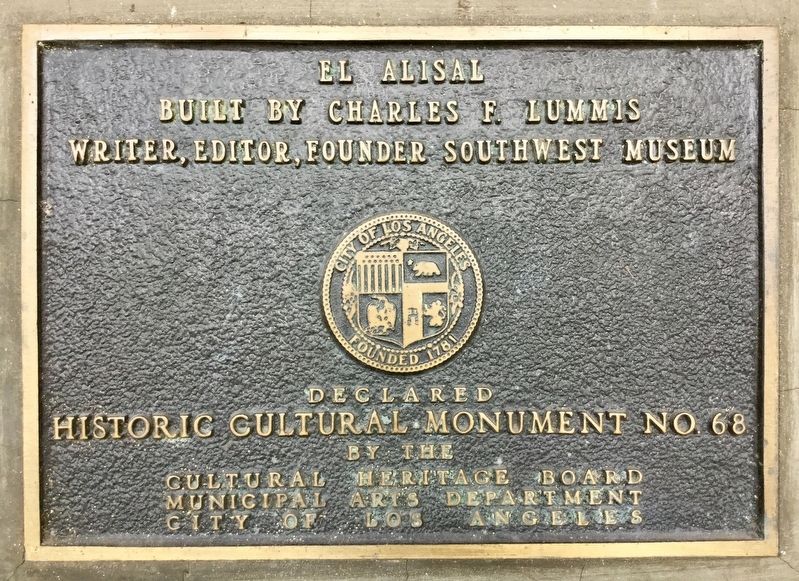 Topics and series. This historical marker is listed in these topic lists: Arts, Letters, Music • Native Americans. In addition, it is included in the California Historical Landmarks, the City of Los Angeles Historic-Cultural Monuments, and the Daughters of the American Revolution series lists.

Other nearby markers. At least 8 other markers are within 2 miles of this marker, measured as the crow flies. Hale House, Circa 1887 (approx. 0.3 miles away); Valley Knudsen Garden Residence (approx. 0.4 miles away); Charles Lummis (approx. half a mile away); Southwest Museum 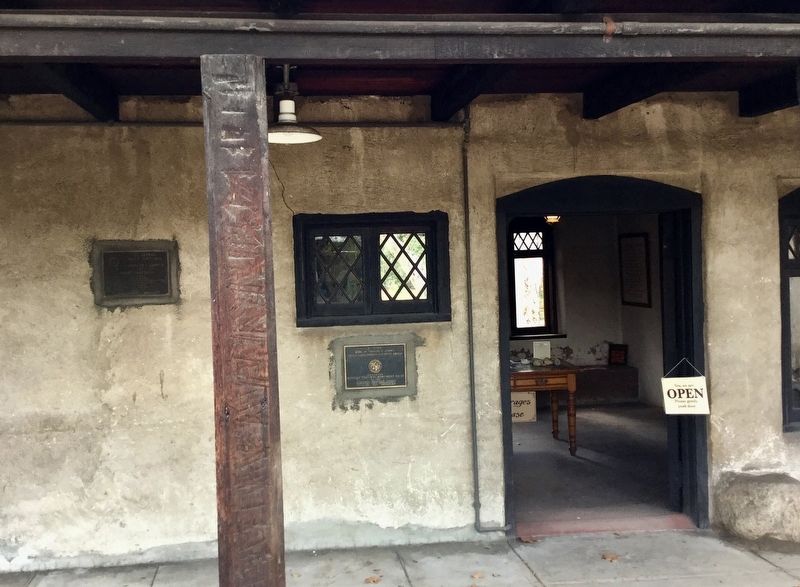 By Craig Baker, March 3, 2018
2. Two markers near the back door.
(approx. half a mile away); Hiner House and Sousa Nook (approx. 0.6 miles away); Huron Substation (approx. one mile away); Confluence of Waters and Cultures (approx. 1.2 miles away); Route 66 & Chicken Boy (approx. 1.3 miles away). Touch for a list and map of all markers in Los Angeles.

Regarding Lummis Home. This is California Historical Landmark 531 - Lummis Home, and listed on the National Register of Historic Places.
Charles Lummis built this home with his own hands. He founded the Southwest Museum of the American Indian. He wrote ten books about the Southwest. He worked as Editor of the Los Angeles Times. He worked as Director of the Los Angeles Public Library. He was an Indian rights activist. He documented Spanish-American culture. He worked to restore the Spanish Missions. He was Knighted by the King of Spain.

Also see . . .
1. Lummis Home. Website of the Los Angeles Department of Recreation and Parks. (Submitted on March 4, 2018, by Craig Baker of Sylmar, California.) 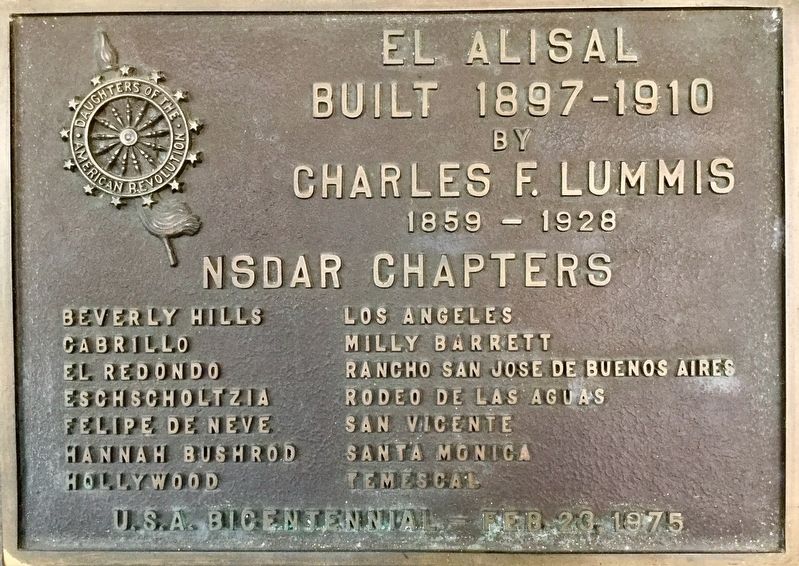 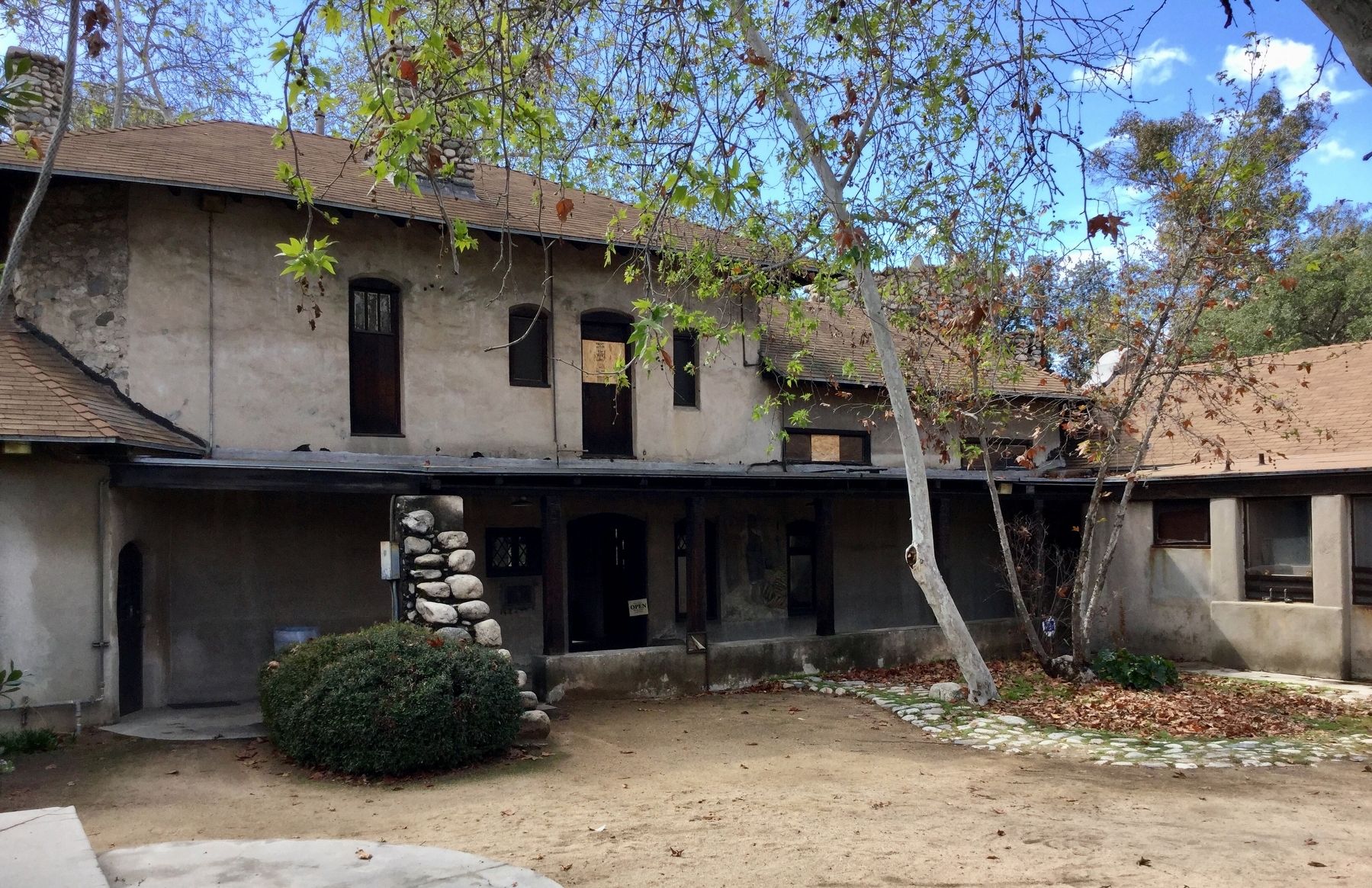 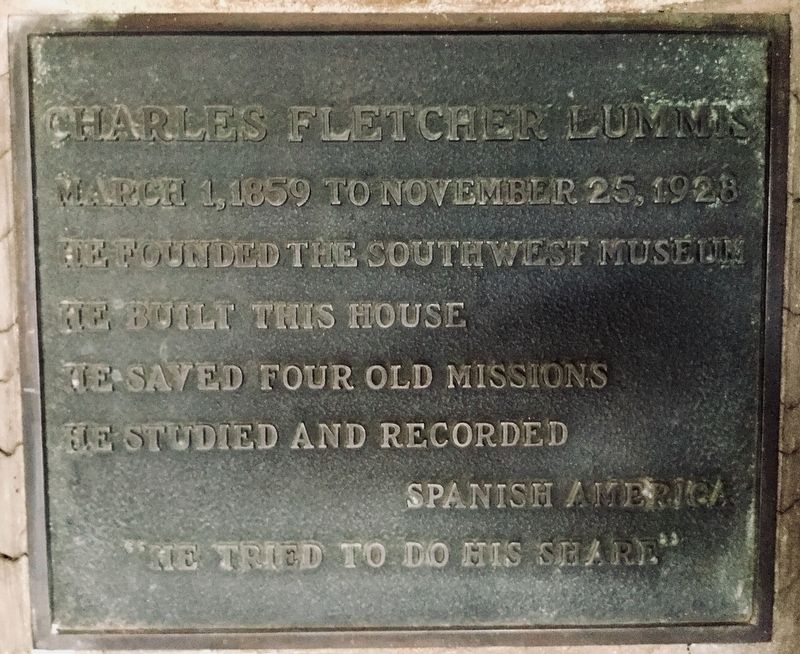 By Craig Baker, March 3, 2018
5. Epitaph
Lummis wrote his own epitaph, and his ashes are interred in the wall behind this marker. 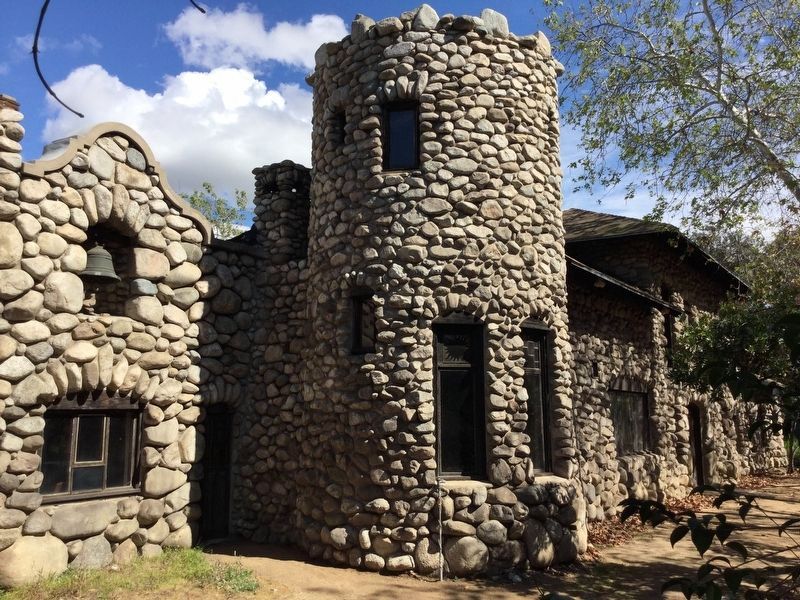 By Craig Baker, March 3, 2018
6. Front of Home.
Lummis built his home using river rock from the nearby arroyo. 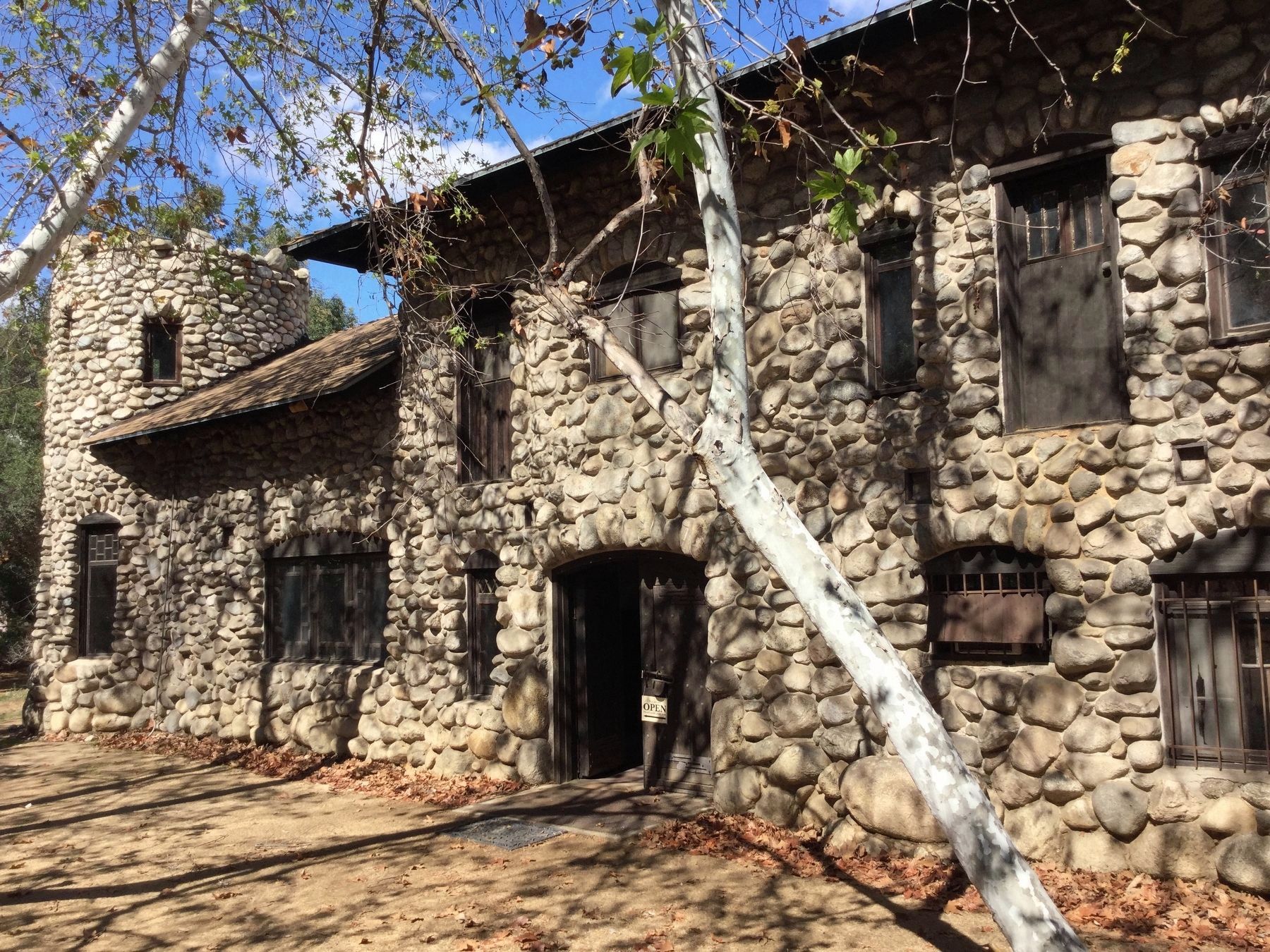 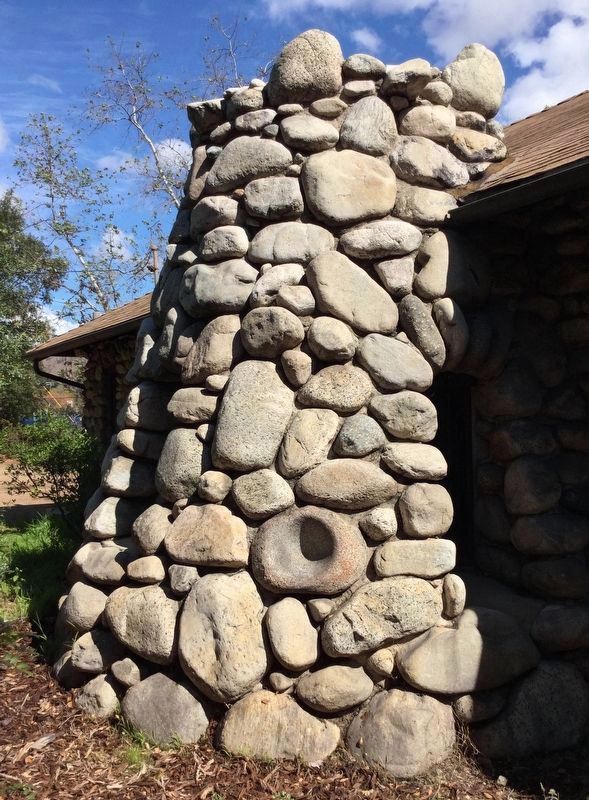 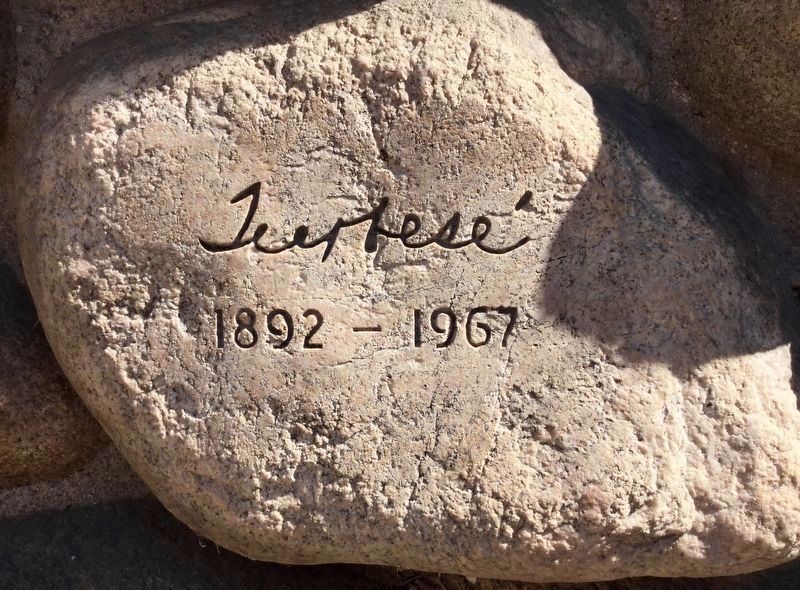 By Craig Baker, March 3, 2018
9. Lummis’ children are also interred in the walls 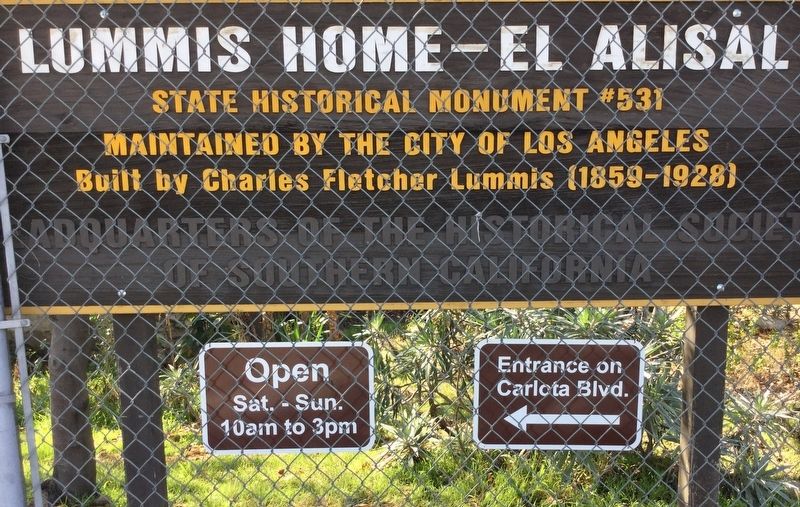 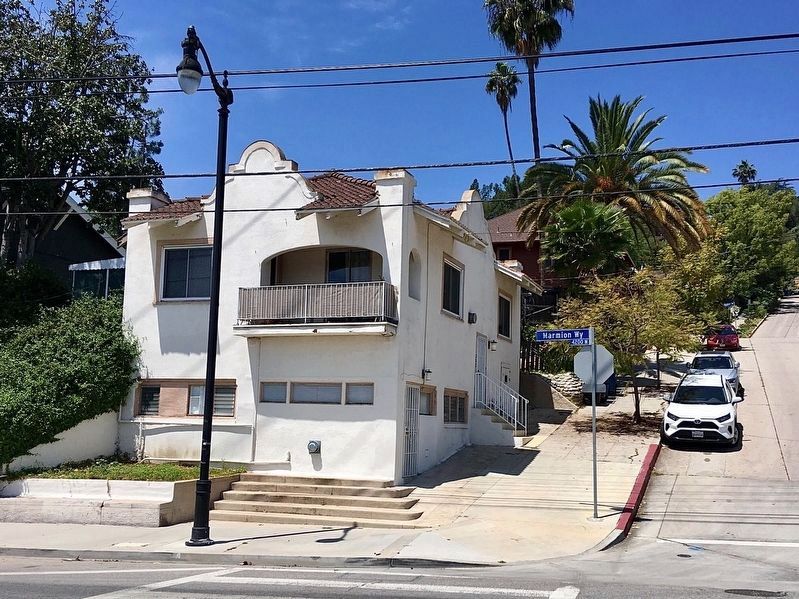