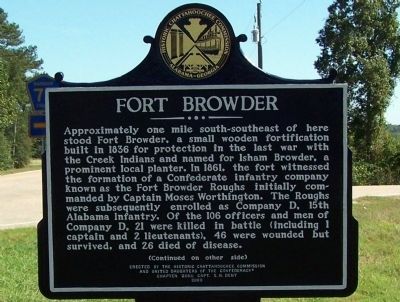 Fort Browder
Approximately one mile south-southwest of here stood Fort Browder, a small wooden fortification built in 1836 for protection in the last war with the Creek Indians and named for Isham Browder, a prominent local planter. In 1861, the fort witnessed the formation of a Confederate infantry company known as the Fort Browder Roughs initially commanded by Captain Moses Worthington. The Roughs were subsequently enrolled as Company D, 15th Alabama Infantry. Of the 106 officers and men of Company D, 21 were killed in battle (including 1 captain and 2 lieutenants), 46 were wounded but survived, and 26 died of disease.
(Continued on other side)
15th Alabama Infantry
(Continued from other side)
The 15th Alabama was recruited from Barbour, Dale, Henry, Macon, Pike, and Russell Counties and organized at Ft. Mitchell in Russell County in the summer of 1861. The unit fought in many skirmishes and battles including:
Winchester, Va. May 25, 1862
Fredericksburg, Va. Dec 23, 1862
Cross Keys, Va. 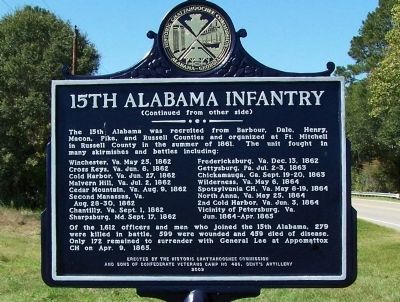 Topics and series. This historical marker is listed in these topic lists: Forts or Castles • War, US Civil • Wars, US Indian. In addition, it is included in the Sons of Confederate Veterans/United Confederate Veterans, and the United Daughters of the Confederacy series lists. 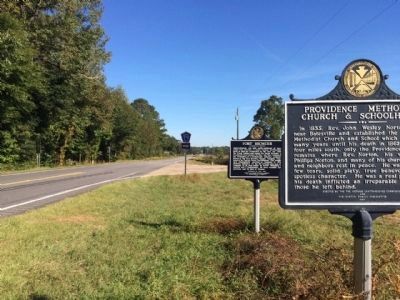 Additional comments.
1. Two markers.
There are two markers of Ft Browder, this one on Hwy 82 and one near Batesville United Methodist Church, on Woody Johnson Road, off Barbour County Road 79.
— Submitted January 13, 2021. 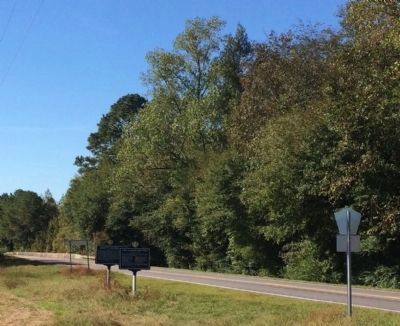