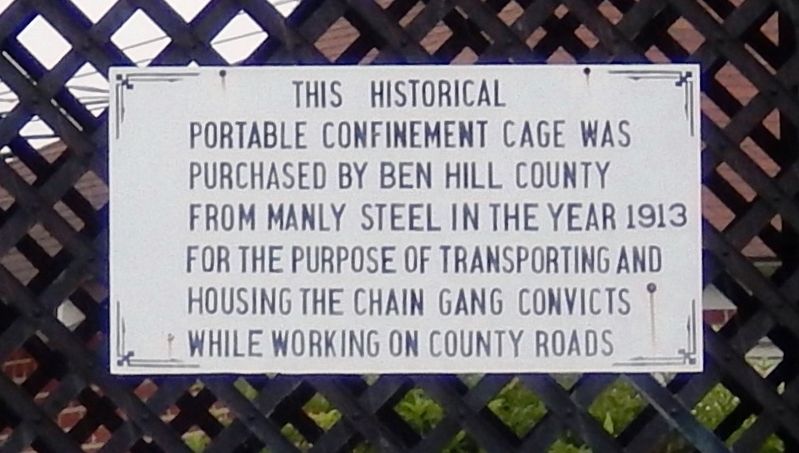 By Cosmos Mariner, October 4, 2015
1. Portable Confinement Cage Marker
Inscription.
Portable Confinement Cage. . This historical portable confinement cage was purchased by Ben Hill County from Manly Steel in the year 1913 for the purpose of transporting and housing the chain gang convicts while working on county roads. . This historical marker is in Fitzgerald in Ben Hill County Georgia

This historical portable confinement cage was purchased by Ben Hill County from Manly Steel in the year 1913 for the purpose of transporting and housing the chain gang convicts while working on county roads.

Location. 31° 42.827′ N, 83° 14.997′ W. Marker is in Fitzgerald, Georgia, in Ben Hill County. Marker is on East Pine Street just east of South Sheridan Street, on the right when traveling west. Marker and subject confinement cage are on exhibit on the south side of the Ben Hill County Courthouse, in front of the old jail house. Touch for map. Marker is at or near this postal address: 402 East Pine Street, Fitzgerald GA 31750, United States of America. Touch for directions.

Other nearby markers. At least 8 other markers are within 9 miles of this marker, measured as the crow flies. Ben Hill County (within shouting distance of this marker); In Grateful Appreciation of The Boys of Ben Hill Co. (about 300 feet away, measured in a direct line); Jefferson Davis Memorial State Park (approx. 0.2 miles away); Fitzgerald (approx. 0.2 miles away); Dedicated to the Veterans of 1898 - 1902 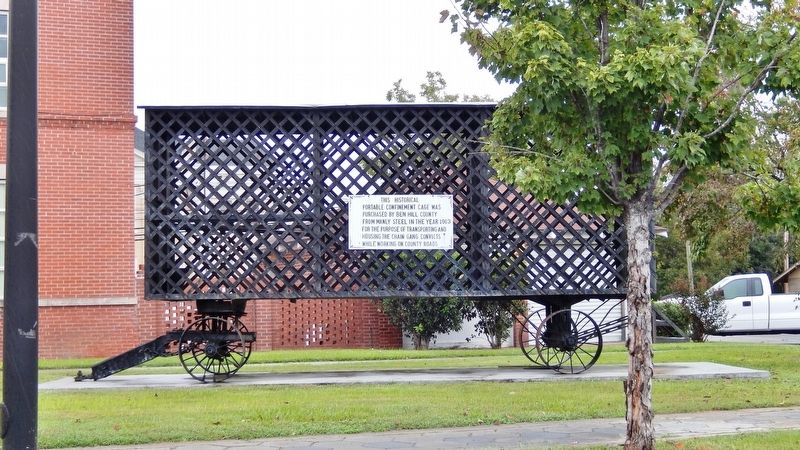 Related markers. Click here for a list of markers that are related to this marker. Manly Portable Convict Cage

Also see . . .
1. Manly Portable Convict Cage. Mounted on 2 1/2" solid steel axles and 2,500 lb., 5th wheel, all-steel truck with 32" wheels and 10" tires. The broad tires and superior construction of truck make the Cage easily transportable. A bucket of disinfectant once or twice a month and a bucket of paint once a year will keep this Cage clean, sanitary and vermin proof. (Submitted on January 16, 2021, by Cosmos Mariner of Cape Canaveral, Florida.) 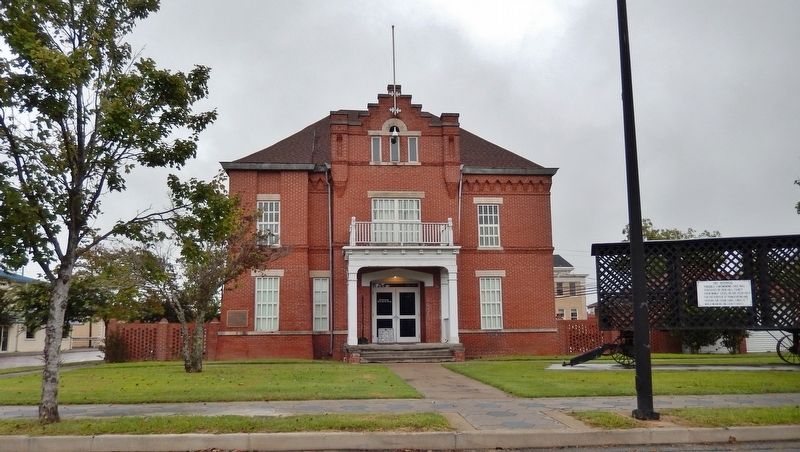