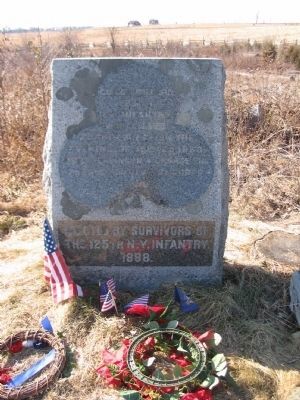 By Craig Swain, February 21, 2009
1. Colonel Willard Marker
The face of the marker incorporates a trefoil symbol of Second Corps.
Inscription.
Colonel Willard. .
Colonel Willard 125th N.Y. Infantry was killed at this place on the evening of July 2d 1863 while leading in a charge the 3d Brig. 3d Div. 2d Corps., Erected by survivors of the 125th N.Y. Infantry 1888.. . This historical marker was erected in 1888 by Surviving members of the 125th New York Infantry. It is in Cumberland Township in Adams County Pennsylvania

Colonel Willard
125th
N.Y. Infantry
was killed
at this place on the
evening of July 2d 1863
while leading in a charge the
3d Brig. 3d Div. 2d Corps.

Erected 1888 by Surviving members of the 125th New York Infantry.

Topics. This historical marker is listed in this topic list: War, US Civil. A significant historical date for this entry is July 2, 1752.

Location. 39° 48.381′ N, 77° 14.339′ W. Marker is in Cumberland Township, Pennsylvania, in Adams County. Marker can be reached from Hancock Avenue, on the right when traveling north. Located on the banks of Plum Run, approximately 300 yards west of the Pennsylvania Memorial, in Gettysburg National Military Park. Touch for map. Marker is in this post office area: Gettysburg PA 17325, United States of America. Touch for directions. 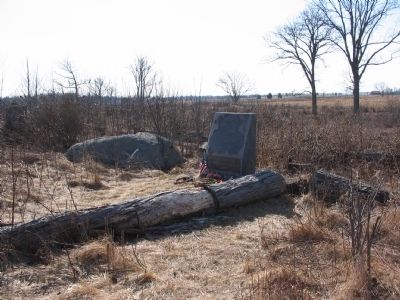 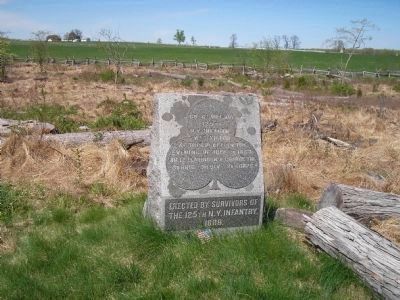 By Bill Coughlin, April 25, 2006
3. Colonel Willard Marker
This marker was originally in a wooded portion of the battlefield. It has since been cleared to give the battlefield an 1863 appearance. Many downed tree trunks can be seen in this photo. 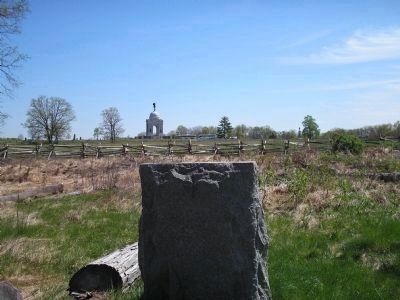 By Bill Coughlin, April 25, 2006
4. Back of Colonel Willard Marker
This photo of the back of the marker shows its proximity to the Pennsylvania Monument. 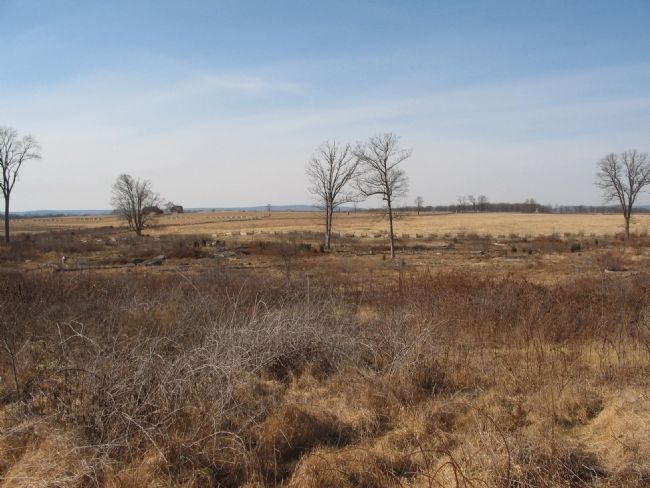 By Craig Swain, February 21, 2009
5. Open Gap in the Federal Center
Looking west from a point just south of the Willard Marker. In the left center is the red barn of the Klingle farm. Just right of center is the site of the Rogers farm. Further to the right is the Virginia State Memorial on Seminary Ridge. Between the two farms are several monuments along Emmitsburg Road representing units of Humphrey's Division of Third Corps. When those troops were driven back, with the collapse of the Peach Orchard salient, a large gap opened in the Federal lines. In this view, Barksdale's Confederate Brigade advanced toward the camera from just left of the Klingle farm. Wilcox's Confederate Brigade advanced from ground to the right of the farm. Federal General W.S. Hancock ordered up any reinforcements nearby to plug this gap and halt the two Confederate brigades. One of the units Hancock ordered up was Willard's Brigade. 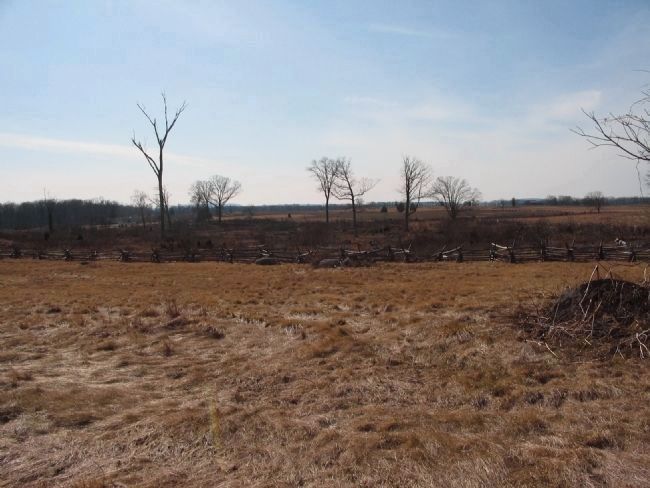 By Craig Swain, February 21, 2009
6. Willard's Brigade Repulses the Attack
Looking again west, but in this case at a point about 25 yards east of the Willard Marker. The lead two regiments of Willard's Brigade, the 125th and 126th New York, charged on line, led by Willard, directly into Barksdale's Mississippi Brigade which was just then crossing Plum Run (in the bottom land here). Colonel Willard was killed leading this assault. The 111th New York, held in reserve, was soon ordered up to support the right of the Brigade, assisting the 1st Minnesota, which at that time was standing alone against Wilcox's Alabama Brigade. The fourth regiment of Willard's Brigade, the 39th New York, was detailed to recapture a Federal artillery battery to the left of this line.
Credits. This page was last revised on December 1, 2020. It was originally submitted on March 1, 2009, by Craig Swain of Leesburg, Virginia. This page has been viewed 1,277 times since then and 8 times this year. Photos:   1, 2. submitted on March 1, 2009, by Craig Swain of Leesburg, Virginia.   3, 4. submitted on November 14, 2010, by Bill Coughlin of Woodland Park, New Jersey.   5, 6. submitted on March 1, 2009, by Craig Swain of Leesburg, Virginia.
Share This Page.