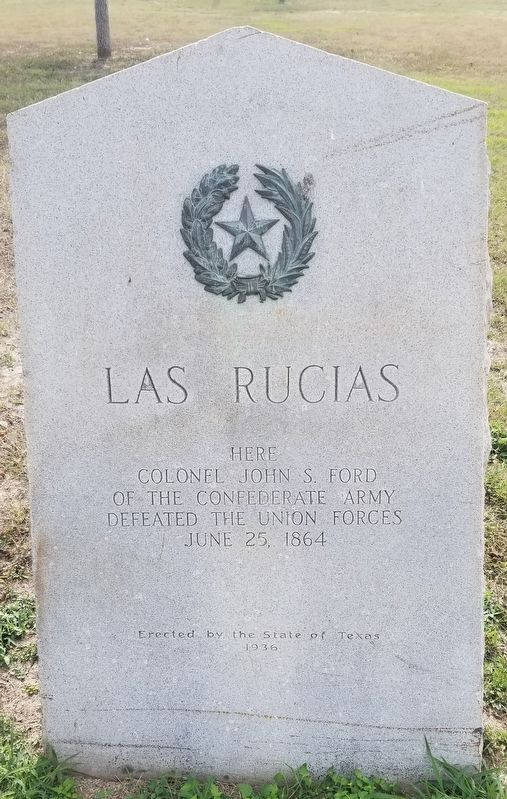 By James Hulse, January 24, 2021
1. Las Rucias Marker
Inscription.
Las Rucias. .
Here Colonel John S. Ford of the Confederate Army defeated the Union Forces June 25, 1864 Erected by the State of Texas 1936. . This historical marker was erected in 1936 by State of Texas. It is in Las Rusias in Cameron County Texas

Location. 26° 3.227′ N, 97° 45.506′ W. Marker is in Las Rusias, Texas, in Cameron County. Marker is on Military Highway (U.S. 281) 0.1 miles west of Don Felipe Trevino, on the left when traveling west. The marker is located in front of the Scared Heart Catholic Church. Touch for map. Marker is in this post office area: Los Indios TX 78567, United States of America. Touch for directions.

In 1861 Ford served as a member of the Secession Convention, commanded an expedition to Brazos Santiago, initiated a trade agreement between Mexico and the Confederacy, and was elected colonel of the Second Texas Cavalry, with a command in the Rio Grande district. Between 1862 and 1865 he discharged with tactful moderation the duties of commandant of conscripts, while at various times he was engaged on border operations protecting Confederate-Mexican trade. In May 1865 he led Confederate forces in the battle of Palmito Ranch, the last battle of the Civil War. Source: The Handbook of Texas