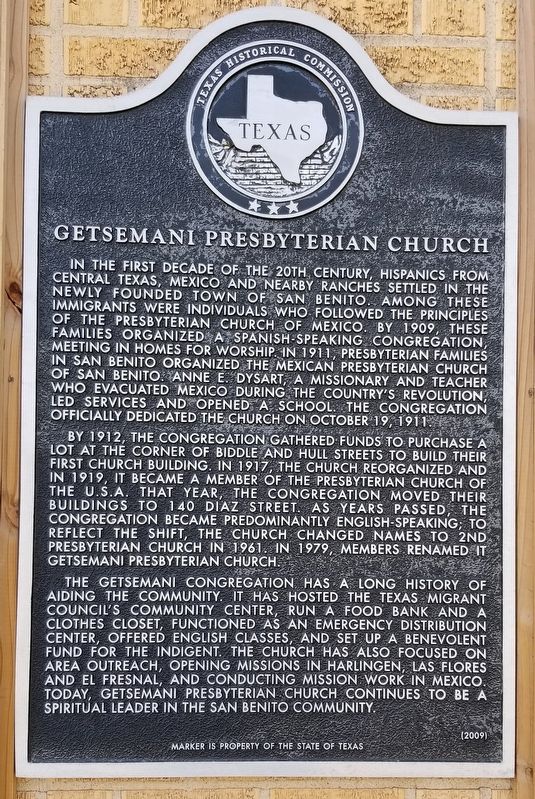 In the first decade of the 20th century, Hispanics from central Texas, Mexico and nearby ranches settled in the newly founded town of San Benito. Among these immigrants were individuals who followed the principles of the Presbyterian Church of Mexico. By 1909, these families organized a Spanish speaking congregation, meeting in homes for worship. In 1911, Presbyterian families in San Benito organized the Mexican Presbyterian Church of San Benito. Anne E. Dysart, a missionary and teacher who evacuated Mexico during the country's revolution, led services and opened a school. The congregation officially dedicated the church on October 19, 1911.

The Getsemani congregation has a long history of aiding the community. It has hosted the Texas Migrant Council's Community Center, run a food bank and a clothes closet, functioned as an emergency distribution center, offered english classes, and set up a benevolent fund for the indigent. The church has also focused on area outreach, opening missions in Harlingen, Las Flores and El Fresnal and conducting mission work in Mexico. Today, Getsemani Presbyterian Church continues to be a spiritual leader in the San Benito community.

Location. 26° 8.099′ N, 97° 38.192′ W. Marker is in San Benito, Texas, in Cameron County. Marker is at the intersection of Diaz Street and Montezuma Street, on the left when traveling north on Diaz Street. Touch for map. Marker is in this post office area: San Benito TX 78586, United States of America. Touch for directions.