This Tablet Marks The Site of Fort Bedford 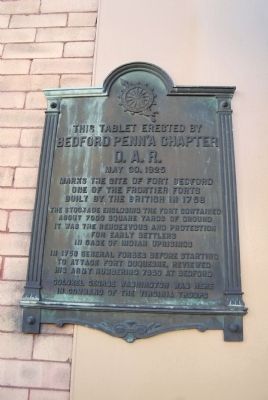 This tablet erected by Bedford Penn'a Chapter Daughters of the American Revolution
May 30, 1925
Marks the site of Fort Bedford
One of the Frontier Forts built by the British in 1758
The stockade enclosing the fort contained about 7000 square yards of ground
It was the rendezvous and protection for early settlers in case of Indian uprisings
In 1758 General Forbes before starting to attack Fort Duquesne, reviewed his army numbering 7850 at Bedford
Colonel George Washington was here in command of the Virginia troops.

Erected 1925 by Daughters of the American Revolution.

Topics and series. This historical marker is listed in these topic lists: Forts and Castles • Native Americans. In addition, it is included in the Daughters of the American Revolution (DAR) series list. A significant historical month for this entry is May 1800. 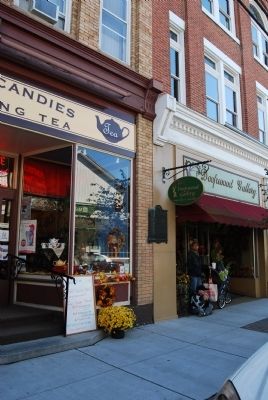 Click or scan to see
this page online
east. Mounted to wall between Bedford Candies/Everything Tea and Deepwood Gallery. Touch for map. Marker is in this post office area: Bedford PA 15522, United States of America. Touch for directions.

More about this marker. Although "Daughters of the American Revolution" is included in the inscription presented here, it is "D.A.R." which appears in its place on the actual marker.