The Lincoln Highway Meets the Superhighway 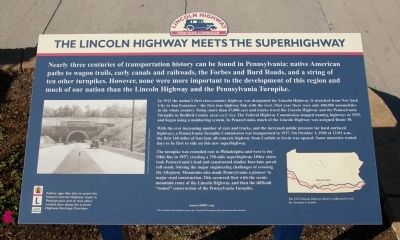 Nearly three centuries of transportation history can be found in Pennsylvania: native American paths to wagon trails, early canals and railroads, the Forbes and Burd Roads, and a string of ten other turnpikes. However, none were more important in the development of this region and much of our nation than the Lincoln Highway and the Pennsylvania Turnpike.

In 1913 the nation's first cross-country highway was designated the Lincoln Highway. It stretched from New York City to San Francisco - the first true highway link with the west. That year there were only 600,000 automobiles in the whole country. Today, more than 47,000 cars and trucks travel the Lincoln Highway and the Pennsylvania Turnpike in Bedford County area each day. The Federal Highway Commission stopped naming highways in 1925, and began using a numbering system. In Pennsylvania, much of the Lincoln Highway was assigned Route 30.

With an ever increasing number of cars and trucks, and the increased public pressure for hard-surfaced highways, a Pennsylvania Turnpike Commission was inaugurated in 1937. On October 1, 1940 at 12:01 a.m. the first 160 miles of four-lane 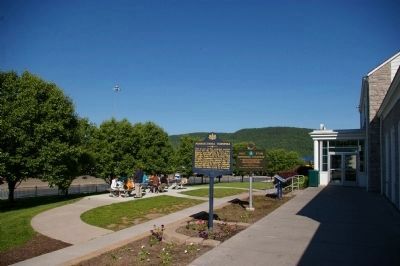 By Christopher Busta-Peck, May 28, 2008
2. Three markers, two of them historical.
The one in question is the furthest from the camera.
all concrete highway from Carlisle to Irwin was opened. Some motorists waited days to be the first to ride on this new superhighway.

The turnpike was extended east to Philadelphia and west to the Ohio line in 1957, creating a 330-mile superhighway. Other states took Pennsylvania's lead and constructed similar four-lane paved toll roads. Solving the major engineering challenges of crossing the Allegheny Mountains also made Pennsylvania a pioneer in major road construction. This occurred first with the scenic mountain route of the Lincoln Highway, and then the difficult "tunnel" construction of the Pennsylvania Turnpike.

Topics and series. This historical marker is listed in this topic list: Roads & Vehicles. In addition, it is included in the Lincoln Highway 🛣️ series list.

Other nearby markers. At least 8 other markers are within walking distance of this location. Pennsylvania Turnpike (a few steps from this marker); Original Turnpike Road Construction 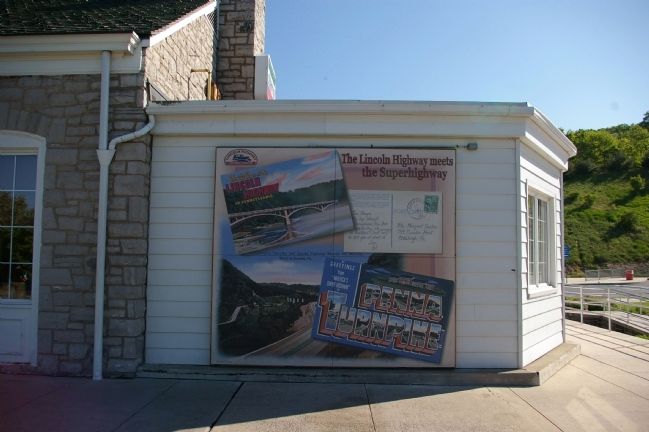