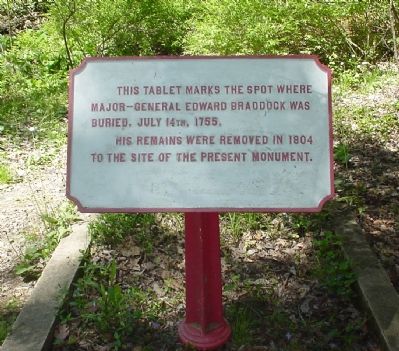 Photographed By Phyllis Prats, May 9, 2006
1. Braddock's Original Grave Marker
Inscription.
Braddock’s Original Grave Site. . This tablet marks the spot where Major-General Edward Braddock was buried, July 14th, 1755,, His remains were removed in 1804 to the site of the present monument. . This historical marker is in Farmington in Fayette County Pennsylvania

This tablet marks the spot where Major-General Edward Braddock was buried, July 14th, 1755,

His remains were removed in 1804 to the site of the present monument.

Topics and series. This historical marker is listed in these topic lists: Colonial Era • War, French and Indian. In addition, it is included in the Braddock’s Road and Maj. Gen. Edward Braddock series list. A significant historical date for this entry is July 14, 1806. 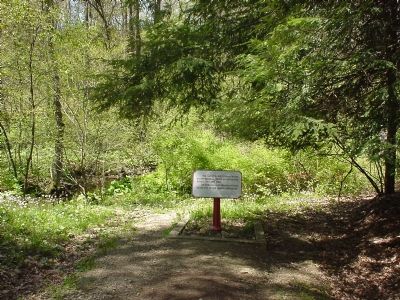 Click or scan to see
this page online
400 feet away); National Road (approx. 0.7 miles away); Fort Necessity (approx. 1.3 miles away). Touch for a list and map of all markers in Farmington.

Additional commentary.
1. Braddock's Expedition
General Braddock led an expedition of 2400 British soldiers, including Daniel Boone and Lieutenant Colonel George Washington, against the French at Fort Duquesne (now Pittsburgh). The expedition left from Columbia, Maryland on June 10, 1755, blazing a tortuous road through the Allegheny Mountains as they proceeded.

Braddock, although a brave soldier, had little understanding or respect for colonials, Native Americans, or their methods of warfare. After crossing the Monongahela River, Braddock's men were ambushed on July 9, 1755 by 900 French soldiers and Native American warriors. Braddock insisted on fighting out in the open, in traditional British "stand-up" style, and as a result about 70% of his force were wiped out. Braddock himself was mortally wounded.

Braddock asked his soldiers to leave him to die on the battlefield. His men refused, and carried him back along the trail they had blazed through Pennsylvania. While in transit, Braddock orchestrated the retreat of his troops and organized relief expeditions for other wounded soldiers. On July 13th Braddock died and was buried in the road. His soldiers continued their retreat the next morning, marching over his grave to obliterate all traces of it and spare it from desecration by the enemy.

The road that Braddock and his men blazed would later become the "National Road", which closely follows present-day U.S. Route 40. Decades after his death, his body was exhumed from this site and moved a couple hundred feet to its present location (see nearby marker, Braddock's Grave).
— Submitted January 30, 2008, by Kevin W. of Stafford, Virginia.
Credits. This page was last revised on February 16, 2021. It was originally submitted on May 9, 2006, by Phyllis Prats of Springfield, Virginia. This page has been viewed 3,595 times since then and 99 times this year. Last updated on February 15, 2021, by Carl Gordon Moore Jr. of North East, Maryland. Photos:   1, 2. submitted on May 9, 2006, by Phyllis Prats of Springfield, Virginia. • Bill Pfingsten was the editor who published this page.
Share this page.