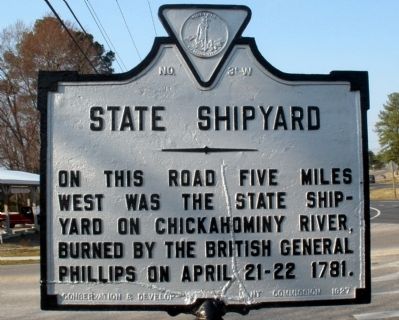 Photographed By Bernard Fisher, March 7, 2009
1. State Shipyard Marker
Inscription.
State Shipyard. . On this road five miles west was the State shipyard on Chickahominy River, burned by the British General Phillips on April 21-22, 1781. . This historical marker was erected in 1927 by Conservation and Development Commission. It is in Toano in James City County Virginia

On this road five miles west was the State shipyard on Chickahominy River, burned by the British General Phillips on April 21-22, 1781.

Topics and series. This historical marker is listed in these topic lists: War, US Revolutionary • Waterways & Vessels. In addition, it is included in the Virginia Department of Historic Resources series list. A significant historical month for this entry is April 1830.

Location. Marker has been reported missing. It was located near 37° 22.912′ N, 76° 48.383′ W. Marker was in Toano, Virginia, in James City County. Marker was at the intersection of Forge Road and Richmond Road (U.S. 60), on the right when traveling east on Forge Road. Touch for map. Marker was in this post office area: Toano VA 23168, United States of America. Touch for directions.

Other nearby markers. At least 8 other markers are within 4 miles of this location, measured as the crow flies. Burnt Ordinary (a few steps from this marker); Chickahominy Church (approx. ¼ mile away); Hickory Neck Church (approx. 0.8 miles away); Olive Branch Christian Church 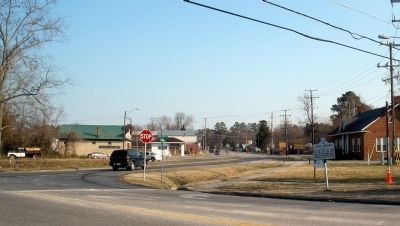