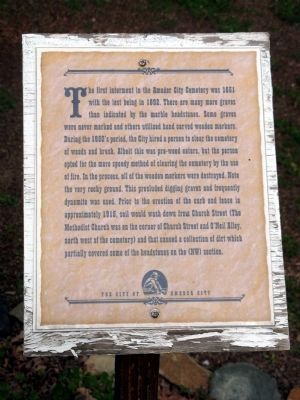 Photographed By Syd Whittle, March 14, 2009
1. Amador City Cemetery Marker
Inscription.
Amador City Cemetery. Est. 1851. The first internment in the Amador City Cemetery was 1851 with the last being in 1892. There are many more graves than indicated by the marble headstones. Some graves were never marked and others utilized hand carved wooden markers. During the 1950’s period, the City hired a person to clear the cemetery of weeds and brush. Albeit this was pre-weed eaters, but the person opted for the more speedy method of clearing the cemetery by the use of fire. In the process, all the wooden markers were destroyed. Note the very rocky ground. This precluded digging graves and frequently dynamite was used. Prior to the erection of the curb and fence in approximately 1915, soil would wash down from Church Street (The Methodist Church was on the corner of Church Street and O’Neil Alley north west of the cemetery) and that caused a collection of dirt which partially covered some of the headstones on the NW section. . This historical marker was erected by The City of Amador City. It is in Amador City in Amador County California

The first internment in the Amador City Cemetery was 1851 with the last being in 1892. There are many more graves than indicated by the marble headstones. Some graves were never marked and others utilized hand carved wooden markers. During the 1950’s period, the City hired a person to clear the cemetery of weeds and brush. Albeit this was pre-weed eaters, but the person opted for the more speedy method of clearing the cemetery by the use of fire. In the process, all the wooden markers were destroyed. Note the very rocky ground. This precluded digging graves and frequently dynamite was used. Prior to the erection of the curb and fence in approximately 1915, soil would wash down from Church Street (The Methodist Church was on the corner of Church Street and O’Neil Alley north west of the cemetery) and that caused a collection of dirt which partially covered some of the headstones on the NW section.

Erected by The City of Amador City.

Topics. This historical marker is listed in these topic lists: Cemeteries & Burial Sites • Notable Places • Settlements & Settlers. A significant historical year for this entry is 1851. 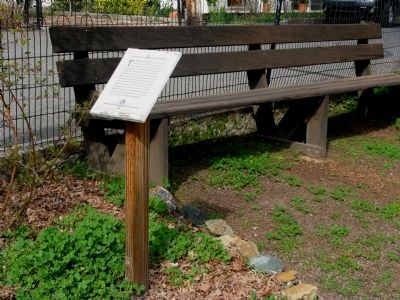 Click or scan to see
this page online
38° 25.193′ N, 120° 49.514′ W. Marker is in Amador City, California, in Amador County. Marker can be reached from Church Street. Cemetery is located behind the Imperial Hotel and may be reached by taking Water Street off of Hwy 49, left on West School Street and then left on Church Street. Marker is located just inside the gate. Touch for map. Marker is in this post office area: Amador City CA 95601, United States of America. Touch for directions.

Also see . . .  Amador County's Pioneer Cemeteries. This site gives directions and background of many of the pioneer cemeteries in the county. (Submitted on March 14, 2009, by Syd Whittle of Mesa, Arizona.) 
Amador Dispatch, Jan. 10, 1880, pg 3 Col. 3 – News Items - by Telephone
FROM AMADOR CITY
“Another sad and fatal accident occurred in the Keystone Mine of this place last Wednesday, by which one of our much respected citizens, Mr. Oliver Vance, almost instantly lost his life. He was at work in the mine, when from some cause, unexpectedly to him, the skip was immediately hoisted instead of lowered, striking him in the side, dragging him under it, and crushing him against some bar or timber above, when the jam became so great as to stop the ordinary power of the machinery. Under the circumstances, it seems singular that he was not literally crushed to pieces. He lived, in an unconscious state, however, until he was brought to the top of the shaft, when he expired within a few seconds. The deceased was a native of Maine, and aged about 34 years – nearly 29 of which had been spent in this county. He leaves behind him a widow and five orphaned children, besides many other relatives and friends to mourn his loss. The funeral was conducted on Thursday under the auspices of the Ancient Order of United Workmen, of which he was a Master Workman member. He had just taken the last degree of the Order the night before his death, thus entitling his family to $2000 from the Fraternity, which by the way, is nearly all of this world’s goods left them, except their little home. It may not be amiss to add in connection with this sad affair, that there seems to be no blame that can attach to anyone connected with the mine, and that the whole matter was one of unavoidable accident.”

The Ancient Order of United Workmen was founded in 1868 to unite the conflicting interests of labor and management. They were the largest fraternal benefit society in 1885, in large part because of their superior insurance protection plan. The motto is Charity, Hope (the anchor), Protection. Ordinarily the emblem is a shield with an anchor, crossed with a band reading A.O.U.W. This headstone displays the compass and square usually found with Masonic emblems with the addition of “W” for workmen. It is not unusual for various societies to share the same or similar symbols as during the late nineteenth and early twentieth centuries there were at least 800 active fraternal organizations in the United States. 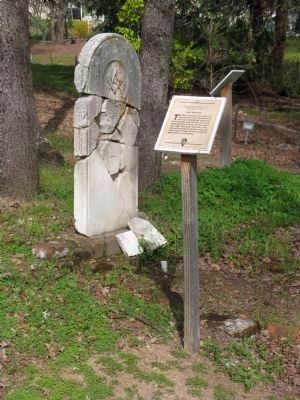 
Sacred to the Memory of William S. Porter,
died aged 46 years and 25 days.
Amador Dispatch 17, Oct., 1863:
Death of William Porter
The subject of this notice has been residing in this County since the year 1849 or ’50. He was about 43 years of age; a native of Maryland, but emigrated to this State from Wayne County, IN. He leaves a wife and four children now residing in that state, they having returned there in 1862, to mourn his loss. He was taken ill about a month ago with lung fever and died about 3 o’clock on the morning of the 15th at Amador City and was buried by his Masonic brethren at 3 o’clock yesterday. Catharine M. Barry, first wife of Senator Albert Henry Rose, died 26 Sept. 1868. In June 1953, a truck with faulty breaks came down Hwy 49 and the driver was unable to make the turn so instead drove the truck through the lot next to the Imperial Hotel and into the cemetery. The driver destroyed the brick mausoleum and two caskets were exposed. A reporter for the Sacramento Bee said one body was that of Mrs. Rose and the other that of Senator Rose. In reality, the second body was most likely that of Mrs. Rose’s father, Daniel Barry, since Senator Rose did not die until Aug. 6, 1912 in Marin County and is buried in Mountain View Cemetery in Oakland. The erroneous reporting by the Bee subsequently was the impetus for many colorful stories over the years in reference to clothing, condition of body, etc. and vignettes about Senator Rose. Alas, the stories were great, but totally lacking validity. The anchor was a common Christian symbol for hope, was often used alone or in combination with other religious symbols in ways completely unconnected to fraternal affiliations. A plain anchor is frequently seen on grave markers and is symbolic of religious faith, the hope of eternal life, resurrection, etc. It is not unusual to see an anchor and a cross, or an anchor and a crown, etc. There was a vocabulary of well known symbols and these were used alone or in different combinations. 
Amador Ledger
Saturday, April 22, 1876, pg. 3, Col. 1
Death in the Mines Samuel Mugford, Died April 14, 1876, age 41
“On Friday afternoon the miners descending the Garfield shaft of the Keystone mine, at Amador City, discovered a miner’s candle burning at the 600 foot level, but no miner near. Thinking there was something wrong, they descended the shaft, and found the lifeless body of Samuel Mugford, his head lying across the track of the shaft and his body on the platform of the 700 foot level. The unfortunate man is supposed to fallen about 100 feet, and must have been killed instantly, as his neck was broken. No one was near him at the time, and how the sad accident occurred is unknown. The deceased was a native of Cornwall, England, and leaves a wife and five children in Amador City.” 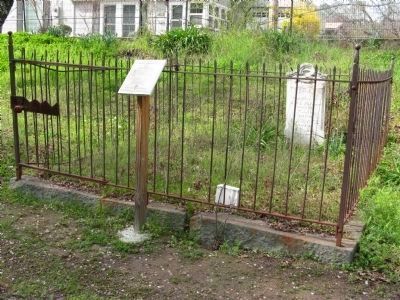 
DIED
Near Amador City on Sunday, February 4th, 1872,
Mrs. Ada Newton, only daughter of Mr. J. Palmer.
On entering the village of Amador City, on Monday evening last, business houses were closed and the mills as still and silent as the grave prepared to receive the last remains of poor Ada. The church where the last sad rites for the dead were performed was crowded with sad hearted friends of the deceased listening to a solemn and impressive funeral sermon from Rev. J. Woods; as I looked for the last time upon her who was loved by all who knew her, I could but say in sympathy with her devoted husband.


”Forgive blessed, the tribute tear
That mourns thy exit from a world like this;
Forgive the wish that would have kept her here.
And stayed thy progress to the realms of bliss.
No more confined to groveling scenes of night;
No more a tenant in mortal clay;
Now should we rather view thy glorious flight
And mark thy progress to the realms of day."
[Note: On this sign her name is spelled “Ada”, however on the headstone it is spelled “Ida”] Irene Anna Woolfolk was born in Kentucky on Feb. 8, 1825, moved to St. Charles, MO between 1826 and 1830, and married Elemander Myers Jan. 2, 1842. He was a blacksmith and a farmer and on March 30, 1857, he took a wagon load of produce to Albright’s store in St. Louis. Somehow the store caught on fire with him in it, and he died. This left Irene a widow with five small children. She managed to make it to California (route unknown) with the children by 1863-4. She exemplifies another hard luck life. However, prior to her marriage, she had come from an extraordinarily wealthy family in Kentucky complete with square miles of farm land instead of acres and came from a slave holding family. Consequently, when President Lincoln was shot in 1865, Irene rode her horse through Amador City shouting: A “jack” was similar to a drill bit and was approximately one to three feet long. The end was bashed with a hammer, the jack turned manually, and then bashed again. This continued until a hole of the required depth was obtained to place a charge of dynamite in. A miner who specialized in this would be referred to as “one jack” or “two jack”, etc., depending upon how fast he could drill the holes by hand. 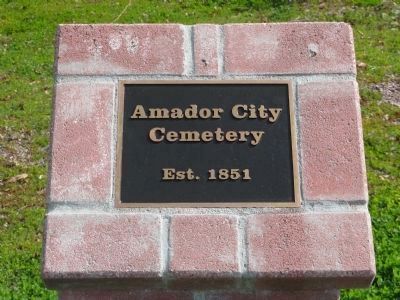 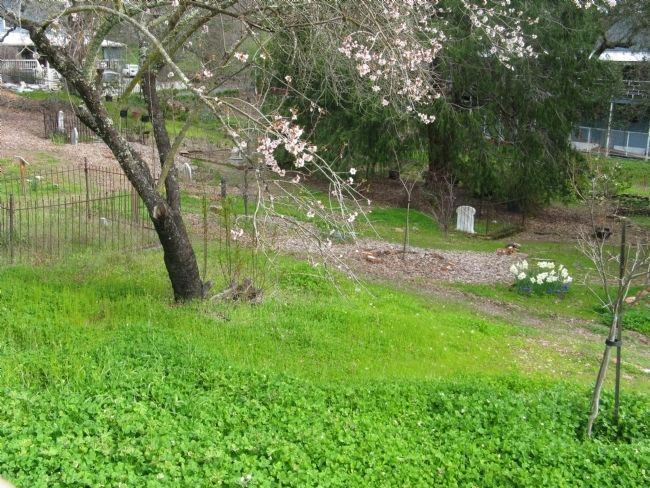