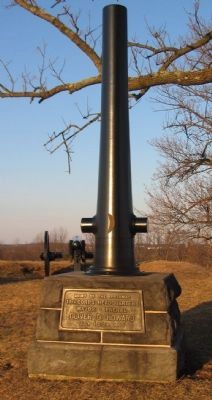 Topics. This historical marker is listed in this topic list: War, US Civil. A significant historical month for this entry is July 1913.

Location. 39° 49.3′ N, 77° 13.733′ W. Marker is in Gettysburg, Pennsylvania, in Adams County. Marker is on Baltimore Pike (State Highway 97), on the right when traveling north. Located on East Cemetery Hill in Gettysburg National Military Park. Touch for map. Marker is in this post office area: Gettysburg PA 17325, United States of America. Touch for directions. 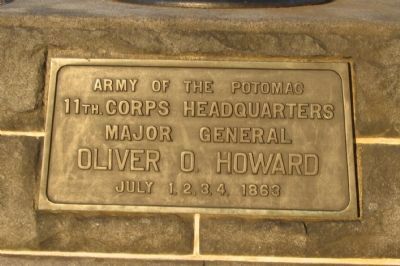 Also see . . .  Report of Maj. Gen. Oliver O. Howard. In his report, General Howard mentioned the terrain and the choice of Cemetery Hill for his headquarters:
After an examination of the general features of the country, I came to the conclusion that the only tenable position for my limited force was the ridge to the southeast of Gettysburg, now so well known as Cemetery Ridge. The highest point at the cemetery commanded every eminence within easy range. The slopes toward the west and south were gradual, and could be completely swept by artillery. To the north, the ridge was broken by a ravine running transversely. I at once established my headquarters near the cemetery, and on the highest point north of the Baltimore pike. (Submitted on March 15, 2009, by Craig Swain of Leesburg, Virginia.) 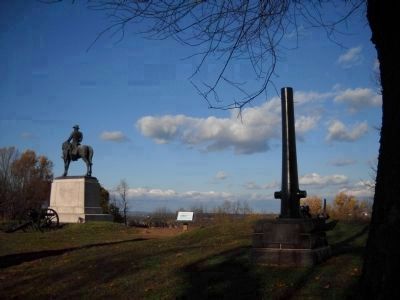 Photographed By Bill Coughlin, November 5, 2010
3. Howard Headquarters Marker and Statue
An equestrian statue of Gen. Howard is seen here to the left of the headquarters cannon marker on Cemetery Hill. 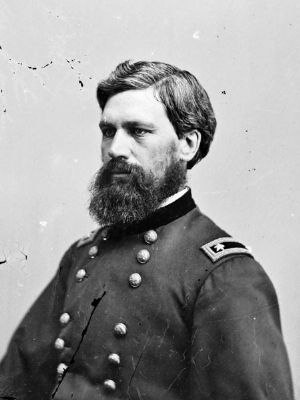 4. General Oliver Otis Howard
General Howard was an alumni of Bowdoin College, Maine and a 1854 graduate of West Point. He lost his right arm at the battle of Fair Oaks, June 1, 1862. After recovery, he served at the battle of Antietam, commanding a brigade. Promoted to Corps command over the winter, Howard lead the XI Corps at Chancellorsville and Gettysburg. After transfer to the Western theater, he and his corps participated in the battle of Chattanooga and the Atlanta Campaign. During the March to the Sea and Carolinas Campaign, Howard commanded the Army of the Tennessee. Post-war, Howard served in the west, in particular dealing with the Nes Perce tribe. After retirement, Howard was the central figure in the founding of Howard University, Washington, D.C.