M.E. Thompson and the Purchase of Jekyll Island 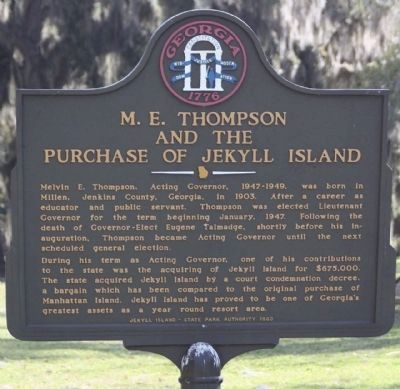 Melvin E. Thompson, Acting Governor, 1947-1949, was born in Millen, Jenkins County, Georgia, in 1903. After a career as educator and public servant, Thompson was elected Lieutenant Governor for the term beginning January, 1947. Following the death of Governor-Elect Eugene Talmadge, shortly before his inauguration, Thompson became Acting Governor until the next scheduled general election.

During his term as Acting Governor, one of his contributions to the state was the acquiring of Jekyll Island for $675,000. The state acquired Jekyll Island by a court condemnation decree, a bargain which has been compared to the original purchase of Manhattan Island. Jekyll Island has proved to be one of Georgia's greatest assets as a year round resort area.

Topics. This historical marker is listed in these topic lists: Education • Parks & Recreational Areas. A significant historical year for this entry is 1903. 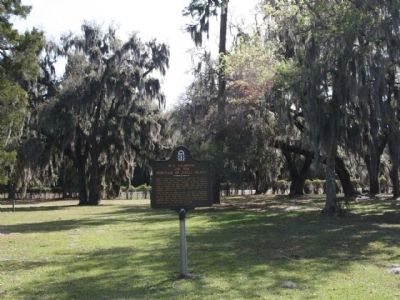 Photographed By Mike Stroud, 2009
2. M.E. Thompson and the Purchase of Jekyll Island Marker

Click or scan to see
this page online
is on Riverview Drive near Old Village Road, on the right when traveling north. Touch for map. Marker is in this post office area: Jekyll Island GA 31527, United States of America. Touch for directions.

Also see . . .
1. Jekyll Island. At the end of November 1910, Senator Nelson W. Aldrich and Assistant Secretary of the Treasury Department A.P. Andrews, along with many of the country's leading financiers; who together represented about one-fourth of the world's wealth, arrived at the Jekyll Island Club to discuss monetary policy and the banking system, an event which some say was the impetus for the creation of the Federal Reserve. a Historic District registered with National Historic Landmark Status in 1978 (Submitted on March 20, 2009, by Mike Stroud of Bluffton, South Carolina.) 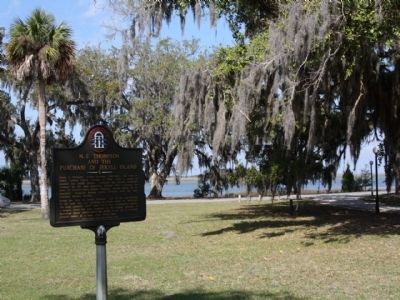 Photographed By Mike Stroud, March 18, 2009
3. M.E. Thompson and the Purchase of Jekyll Island Marker, along Riverview Drive beside Jekyll River 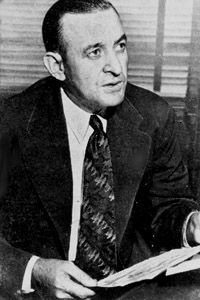