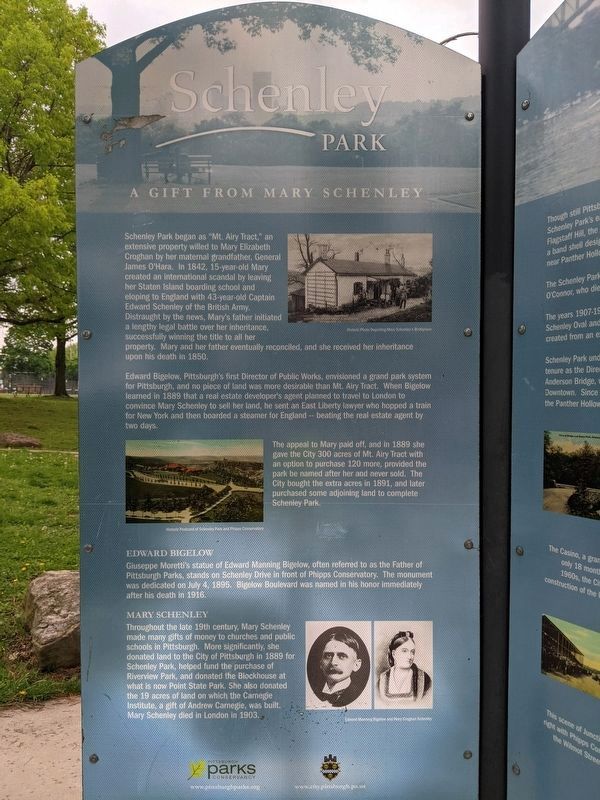 A Gift from Mary Schenley
Schenley Park began as "Mt. Airy Tract," an extensive property willed to Mary Elizabeth Croghan by her maternal grandfather, General James O'Hara. In 1842, 15-year-old Mary created an international scandal by leaving her Staten Island boarding school and eloping to England with 43-year-old Captain Edward Schenley of the British Army. Distraught by the news, Mary's father initiated a lengthy legal battle over her inheritance, successfully winning the title to all her property. Mary and her father eventually reconciled, and she received her inheritance upon his death in 1850.

Edward Bigelow, Pittsburgh's first Director of Public Works, envisioned a grand park system for Pittsburgh, and no piece of land was more desirable than Mt. Airy Tract. When Bigelow learned in 1889 that a real estate developer's agent planned to travel to London to convince Mary Schenley to sell her land, he sent an East Liberty lawyer who hopped a train for New York and then boarded a steamer for England - beating the real estate agent by two days. 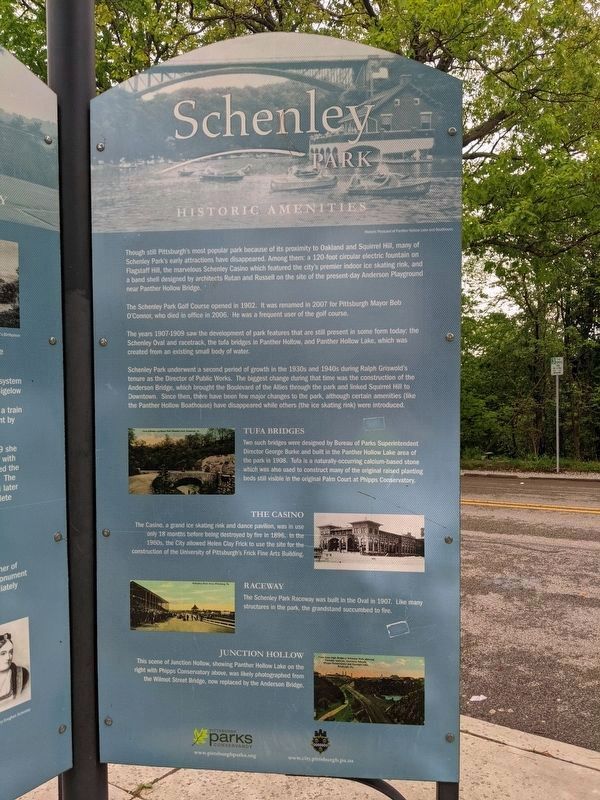 Click or scan to see
this page online
of Mt. Airy Tract with an option to purchase 120 more, provided the park be named after her and never sold. The City bought the extra acres in 1891, and later purchased some adjoining land to complete Schenley Park.

EDWARD BIGELOW
Giuseppe Moretti's statue of Edward Manning Bigelow, often referred to as the Father of Pittsburgh Parks, stands on Schenley Drive in front of Phipps Conservatory. The monument was dedicated on July 4, 1895. Bigelow Boulevard was named in his honor immediately after his death in 1916.

MARY SCHENLEY
Throughout the late 19th century, Mary Schenley made many gifts of money to churches and public schools in Pittsburgh. More significantly, she donated land to the City of Pittsburgh in 1889 for Schenley Park, helped fund the purchase of Riverview Park, and donated the Blockhouse at what is now Point State Park. She also donated the 19 acres of land on which the Carnegie Institute, a gift of Andrew Carnegie, was built. Mary Schenley died in London in 1903.

Historic Amenities
Though still Pittsburgh's most popular park because of its proximity to Oakland and Squirrel Hill, many of Schenley Park's early attractions have disappeared. Among them: a 120-foot circular electric fountain on Flagstaff Hill, the marvelous Schenley Casino which featured the city's premier indoor ice skating rink, and a band shell designed 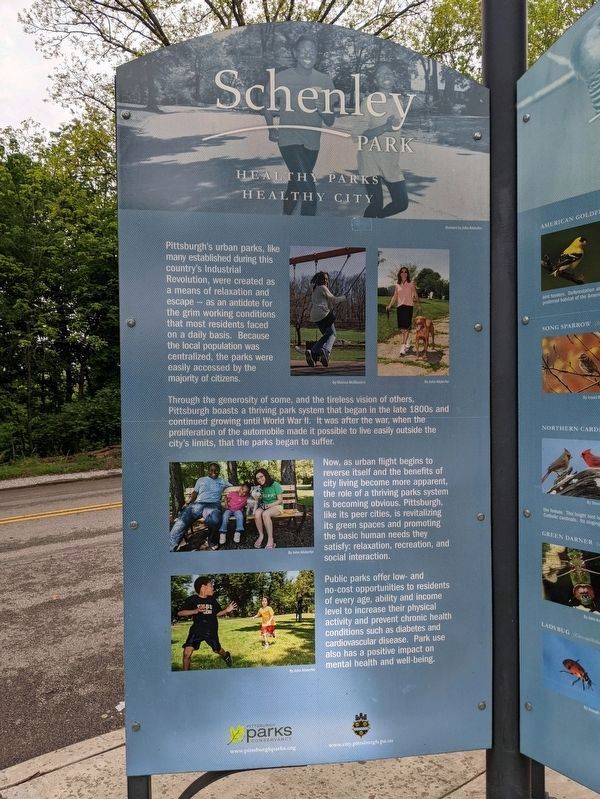 By Mike Wintermantel
3. Healthy Parks Healthy City Marker
by architects Rutan and Russell on the site of the present-day Anderson Playground near Panther Hollow Bridge.

The Schenley Park Golf Course opened in 1902. It was renamed in 2007 for Pittsburgh Mayor Bob O'Connor, who died in office in 2006. He was a frequent user of the golf course.

The years 1907-1909 saw the development of park features that are still present in some form today, the Schenley Oval and racetrack, the tufa bridges in Panther Hollow, and Panther Hollow Lake, which was created from an existing small body of water.

Schenley Park underwent a second period of growth in the 1930s and 1940s during Ralph Griswold's tenure as the Director of Public Works. The biggest change during that time was the construction of the Anderson Bridge, which brought the Boulevard of the Allies through the park and linked Squirrel Hill to Downtown. Since then, there have been few major changes to the park, although certain amenities (like the Panther Hollow Boathouse) have disappeared while others (the ice skating rink) were introduced.

TUFA BRIDGES
Two such bridges were designed by Bureau of Parks Superintendent Director George Burke and built in the Panther Hollow Lake area of the park in 1908. Tufa is a naturally occurring calcium-based stone which was also used to construct many of the original raised planting beds still visible in the 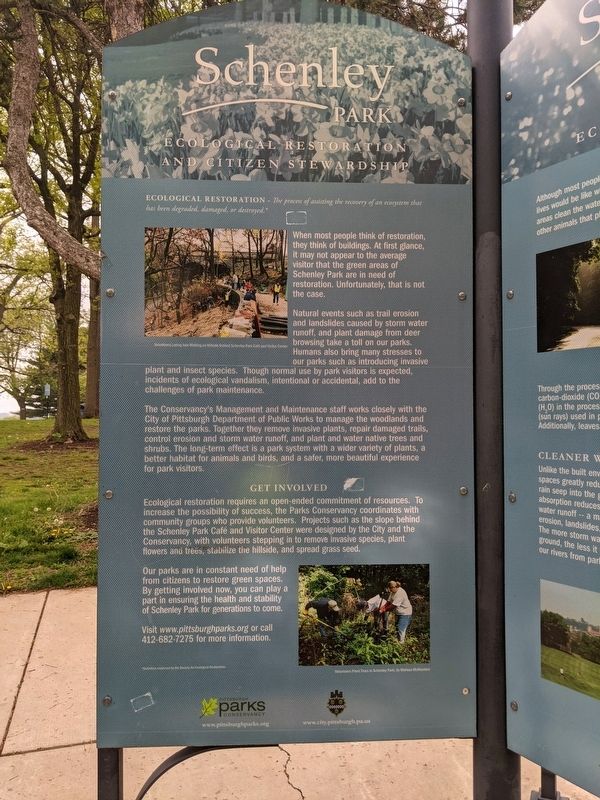 THE CASINO
The Casino, a grand ice skating sink and dance pavilion, was in use only 18 months before being destroyed by fire in 1896. in the 1960s, the City allowed Helen Clay Frick to use the site for the construction of the University of Pittsburgh's Frick Fine Arts Building.

RACEWAY
The Schenley Park Raceway was built in the Oval in 1907. Like many structures in the park, the grandstand succumbed to fire.

JUNCTION HOLLOW
This scene of Junction Hollow, showing Panther Hollow Lake on the right with Phipps Conservatory above, was likely photographed from the Wilmot Street Bridge, now replaced by the Anderson Bridge.

Healthy Parks Healthy City
Pittsburgh's urban parks, like many established during this country's Industrial Revolution, were created as a means of relaxation and escape as an antidote for the grim working conditions that most residents faced on a daily basis. Because the local population was centralized, the parks were easily accessed by the majority of citizens.

Through the generosity of some, and the tireless vision of others. Pittsburgh boasts a thriving park system that began in the late 1800s and continued growing until World War II. it was after the war, when the proliferation of the automobile made it possible to live easily outside the 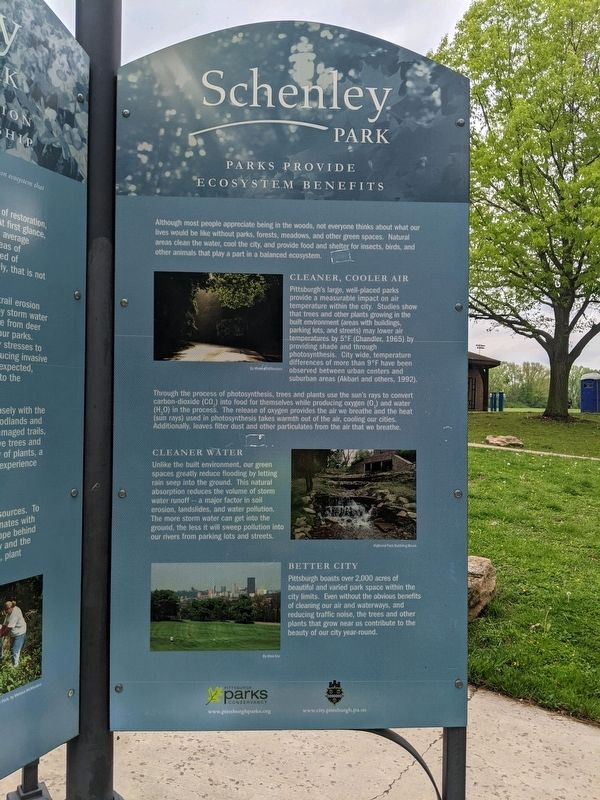 Now, as urban flight begins to reverse itself and the benefits of city living become more apparent, the role of a thriving parks system is becoming obvious. Pittsburgh, like its peer cities, is revitalizing its green spaces and promoting the basic human needs they satisfy: relaxation, recreation, and social interaction.

Public parks offer low- and no-cost opportunities to residents of every age, ability and income level to increase their physical activity and prevent chronic health conditions such as diabetes and cardiovascular disease. Park use also has a positive impact on mental health and well-being.

Ecological Restoration and Citizen Stewardship
ECOLOGICAL RESTORATION The process of assisting the recovery of an ecosystem that has been degraded, damaged, or destroyed.

When most people think of restoration, they think of buildings. At first glance, it may not appear to the average visitor that the green areas of Schenley Park are in need of restoration. Unfortunately, that is not the case.

Natural events such as trail erosion and landslides caused by storm water runoff, and plant damage from deer browsing take a toll on our parks. Humans also bring many stresses to our parks such as introducing invasive plant and insect species. Though normal use by park visitors 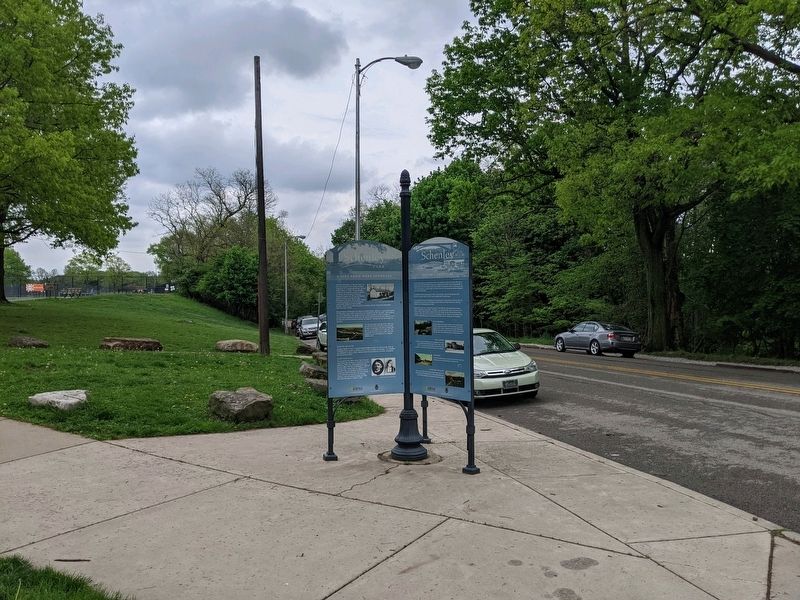 By Mike Wintermantel
6. Schenley Park Marker
is expected, incidents of ecological vandalism, intentional or accidental, add to the challenges of park maintenance.

The Conservancy's Management and Maintenance staff works closely with the City of Pittsburgh Department of Public Works to manage the woodlands and restore the parks. Together they remove invasive plants, repair damaged trails, control erosion and storm water runoff, and plant and water native trees and shrubs. The long-term effect is a park system with a wider variety of plants, a better habitat for animals and birds, and a safer, more beautiful experience for park visitors.

GET INVOLVED Ecological restoration requires an open-ended commitment of resources. To increase the possibility of success, the Parks Conservancy coordinates with community groups who provide volunteers. Projects such as the slope behind the Schenley Park Cafe and Visitor Center were designed by the City and the Conservancy, with volunteers stepping in to remove invasive species, plant flowers and trees, stabilize the hillside, and spread grass seed.

Our parks are in constant need of help from citizens to restore green spaces. By getting involved now, you can play a part in ensuring the health and stability of Schenley Park for generations to come.

Parks Provide Ecosystem Benefits
Although most people appreciate being in the woods, not everyone thinks about what our lives would be like without parks, forests, meadows, and other green spaces. Natural areas clean the water, cool the city, and provide food and shelter for insects, birds, and other animals that play a part in a balanced ecosystem.

CLEANER, COOLER AIR Pittsburgh's large, well-placed parks provide a measurable impact on air temperature within the city. Studies show that trees and other plants growing in the built environment (areas with buildings, parking lots, and streets) may lower air temperatures by (Chandler. providing shade and through 1965) by photosynthesis. City wide, temperature differences of more than 9°F have been o observed between urban centers and suburban areas (Akbari and others, 1992), Through the process of photosynthesis, trees and plants use the sun's rays to convert carbon dioxide (CO) into food for themselves while producing oxygen (0) and water (HO) in the process. The release of oxygen provides the air we breathe and the heat (sun rays) used in photosynthesis takes warmth out of the air, cooling our cities. Additionally, leaves filter dust and other particulates from the air that we breathe.

CLEANER WATER Unlike the built environment, our green spaces greatly reduce flooding by letting rain seep into the ground. This natural absorption reduces the volume of storm water runoff a major factor in soil erosion, landslides, and water pollution. The more storm water can get into the ground, the less it will sweep pollution into our rivers from parking lots and streets.

BETTER CITY
Pittsburgh boasts over 2,000 acres of beautiful and varied park space within the city limits. Even without the obvious benefits of cleaning our air and waterways, and reducing traffic noise, the trees and other plants that grow near us contribute to the beauty of our city year-round.

Topics. This historical marker is listed in these topic lists: Environment • Parks & Recreational Areas. A significant historical date for this entry is July 4, 1895.

Location. 40° 25.873′ N, 79° 56.631′ W. Marker is in Pittsburgh, Pennsylvania, in Allegheny County. Marker is on Overlook Drive 0.4 miles west of Greenfield Road, on the right when traveling west. Located in Schenley Park near the Ice Rink. Touch for map. Marker is in this post office area: Pittsburgh PA 15207, United States of America. Touch for directions.

More about this marker. Each panel is part of a six-sided kiosk.