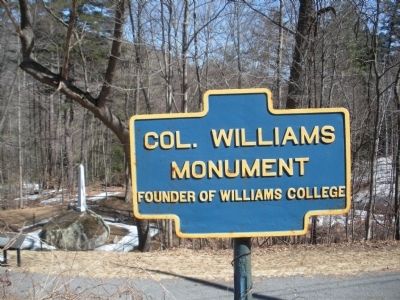 Topics. This historical marker and monument is listed in this topic list: War, French and Indian.

Location. 43° 22.51′ N, 73° 42.007′ W. Marker is in Lake George, New York, in Warren County. Marker is on Lake George Glens Falls Road (U.S. 9) half a mile north of Intersection of Farm to Market Road (County Route 149), on the right when traveling north. In the background is the Colonel Williams Monument. Touch for map. Marker is in this post office area: Lake George NY 12845, United States of America. Touch for directions.

More about this monument. Close to this marker are additional signages chronicling the events on the morning of September 8,1755 as well as the monument erected by Williams College to the memory of Colonel Ephraim Williams, Jr. 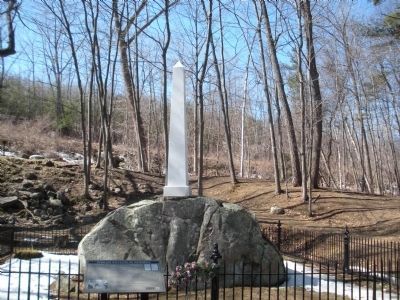 Photographed By John Farrell, March 24, 2009
2. Col. Williams Monument
This is a recent replacement of the original monument which is now at Williams College. The monument is erected on the rock where Colonel Williams was shot dead when he attempted to rally his forces after the ambush on the morning of September 8, 1755. US Route 9 is up, behind the monument in the background. 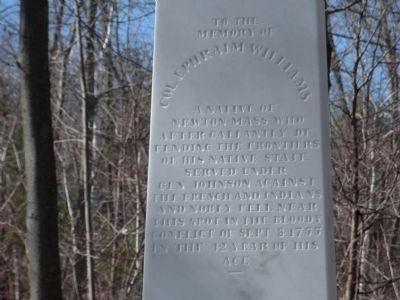 Photographed By John Farrell, March 24, 2009
3. Col. Williams Monument Inscription
To the memory of Col. Ephraim Williams
A native of Newton Mass who after gallantly defending the frontiers of his native state, served under Gen. Johnson against the French and Indians and nobly fell near this spot in the bloody conflict of Sept 8, 1755 in the 42 year of his age. 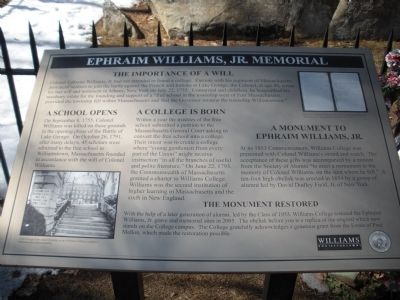 Photographed By John Farrell, March 24, 2009
4. Signage in front of monument 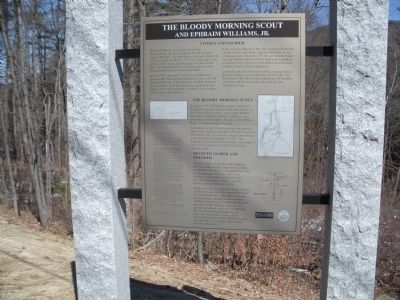