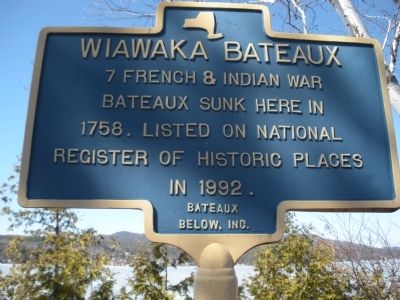 Photographed By John Farrell, March 24, 2009
1. Wiawaka Bateaux Marker
Inscription.
Wiawaka Bateaux. . 7 French and Indian War bateaux sunk here in 1758. Listed on the National Register of Historic Places in 1992. . This historical marker was erected by Bateaux Below, Incorporated. It is in Lake George in Warren County New York

7 French and Indian War bateaux sunk here in 1758. Listed on the National Register of Historic Places in 1992.

Erected by Bateaux Below, Incorporated.

Location. 43° 25.567′ N, 73° 41.817′ W. Marker is in Lake George, New York, in Warren County. Marker can be reached from County Route 9L, 1½ miles north of U.S. 9. Route 9L is a right hand turn off of US Route 9 heading north from exit 21 of the Adirondack Northway, Interstate Route 87. The turn is at a traffic light directly opposite the Howard Johnson Restaurant. From this turn, Wiawaka Holiday House is 1.5 miles on the left. Touch for map. Marker is in this post office area: Lake George NY 12845, United States of America. Touch for directions. 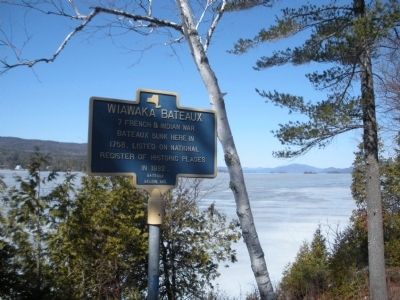 Photographed By John Farrell, March 24, 2009
2. Wiawaka Bateaux Marker
Looking to the northwest with the frozen surface of Lake George in the background beyond the marker.

More about this marker. The marker itself is found on the grounds of the Wiawaka Holiday House complex overlooking Lake George.

Regarding Wiawaka Bateaux. In the fall of 1758 after General James Abercrombie and his army had been defeated at Fort Carillon (Fort Ticonderoga), they retreated to the head of Lake George and built many bateaux, two radeaux and a sloop. The intent was to use these vessels in a new assault against Fort Carillon the following year. However, Fort William Henry had been destroyed the year before by French forces under the command of General Montcalm and there was no place for the British to garrison troops for the protection of the vessels. With winter coming on, the vessels were intentionally sunk in Lake George with the plan to raise them in the spring, thus protecting them from French raiding parties. Not all the vessels were recovered. 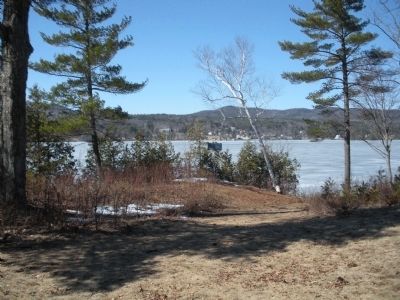