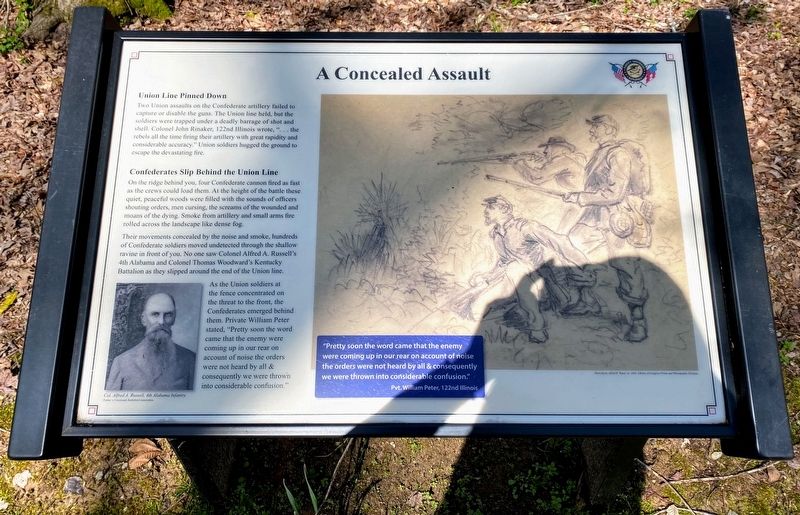 "Pretty soon the word came that the enemy were coming up in our rear on account of noise the orders were not heard by all & consequently we were thrown into considerable confusion".
Pvt. William Peter, 122nd Illinois

Union Line Pinned Down
Two Union assaults on the Confederate artillery failed to capture or disable the guns. The Union line held, but the soldiers were trapped under a deadly barrage of shot and shell. Colonel John Rinaker, 122nd Illinois wrote, "...the rebels all the time firing their artillery with great rapidity and considerable accuracy." Union soldiers hugged the ground to escape the devastating fire.

Confederates Slip Behind the Union Line
On the ridge behind you, four Confederate cannon fired as fast as the crews could load them. At the height of the battle these quiet, peaceful woods were filled with the sounds of officers shouting orders, men cursing, the screams of the wounded and moans of the dying. Smoke from artillery and small arms fire rolled across the landscape like dense fog.

Their movements concealed by the noise and smoke, hundreds of Confederate

Click or scan to see
this page online
soldiers moved undetected through the shallow ravine in front of you. No one saw Colonel Alfred A. Russell's 4th Alabama and Colonel Thomas Woodward's Kentucky Battalion as they slipped around the end of the Union line.

As the Union soldiers at the fence concentrated on the threat to the front, the Confederates emerged behind them. Private William Peter stated, "Pretty soon the word came that the enemy were coming up in our rear on account of noise the orders were not heard by all & consequently we were thrown into considerable confusion."

Location. 35° 47.209′ N, 88° 23.105′ W. Marker is in Parkers Crossroads, Tennessee, in Henderson County. Marker is on Federal Lane 0.2 miles east of Tennessee Route 22, on the right when traveling east. Marker is located along the South Battlefield Trail, at Auto Tour Stop No. 7 of the Parker's Crossroads Battlefield Auto Tour. Touch for map. Marker is in this post office area: Wildersville TN 38388, United States of America. Touch for directions.